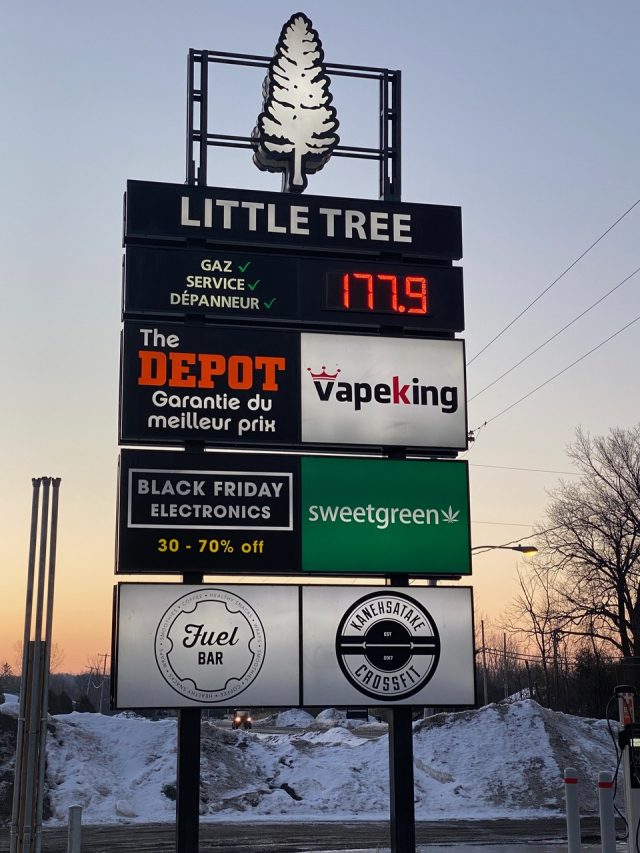 Kanehsata’kehró:non Karonhienhawe Nicholas got through school as a single mother relying on social assistance, but when she found a good job working for the Correctional Service of Canada as an Indigenous liaison officer, she thought her days of having to say “no” to her children were over.

With inflation raging and now gas prices spiking, however, she said she is feeling a sense of déjà vu.

With a commute to work that is over 50 KM each way, she has to gas up every two to three days, and she feels like she is almost back to living paycheque to paycheque.

“I’m not making megabucks, but I have a good decent salary, but lately it feels like I’m right back on welfare where I started when I was a student,” she said.

She believes others in the community are also worried about making ends meet right now.

“Everybody’s feeling it. Everybody’s hurting,” she said. “All I can say is I really feel for the lower-income families.”

Little Tree Gas was 177.9 per litre on Wednesday, while the advertised rate at Crevier Express was 192.9.

Jacob Cree, who works the cash register at Little Tree, said he has been hearing frequent lamentations from customers.

He said gas stations are not trying to take advantage of the situation by raising their prices.

“When you (as a gas station) get your gas, the price just costs more to purchase,” he said. “You’ve got to bump it up, or else you’re going to take a loss.”

The high gas prices seen in Kanesatake, Kahnawake, and elsewhere have multiple causes – such as more people returning to work and leisure – but recent spikes are driven by Russia’s horrific invasion of Ukraine.

“As long as things continue to be a problem between Russia and Ukraine, I think prices could continue to go higher, but I don’t envision that it’s going to go to say $3 a litre or $4,” said Moshe Lander, a senior lecturer in economics at Concordia University.

“It would probably cross over $2, but I think once you get to about $2.25, $2.30, I think there’s going to start to be pressure at that point where consumers are really going to start to feel it, and the economy could slow down in a way where the demand surge we’re seeing could quickly be offset by people not being able to afford to travel.”

Oil prices are a global commodity, so while Canada was using next to no Russian oil, ripples in the global market are pushing up the cost.

In the short run, the government has no tools to address rising gas prices outside of suspending taxes, according to Lander. Such a move is unlikely and would not help those who are already exempt.

Consumers have little recourse but to try to find ways to limit travel by car.

If the high prices continue, the impact could spill into community finances.

“It’s okay for now, but if it lasts years, we’ll have to find funding for it,” said John Canatonquin, first portfolio chief for economic development and finance and administration at the Mohawk Council of Kanesatake.

The public works department uses gasoline in its machinery while running a deficit almost every year, he said.

He is also concerned about the impact on Kanehsata’kehró:non who work outside the community.

“The ones who work in Montreal and have to travel back and forth every day, it will affect them big time,” he said.

Kahnawa’kehró:non are faced with similar concerns.

“The spike in gas prices is very concerning, even if you don’t own a vehicle,” said Mike Delisle Jr., Mohawk Council of Kahnawake lead portfolio chief for economic development.

Oil prices are linked to many kinds of goods, he said, and food prices will be affected by increased delivery costs.

Community service delivery and individual budgets could be affected as people try to recover from the pandemic.

“We’re cognizant of these factors and will continue to monitor the effects of the recent increases on our people and will try to help,” said Delisle.

In the meantime, nobody can say for sure how long pressure on gas prices will continue.

“I’m not sure if it’s stressed or more irritated,” said Nicholas of the feeling she gets each time she sees the price tick up.

“I think I’m more irritated at the fact that this is ridiculous.”