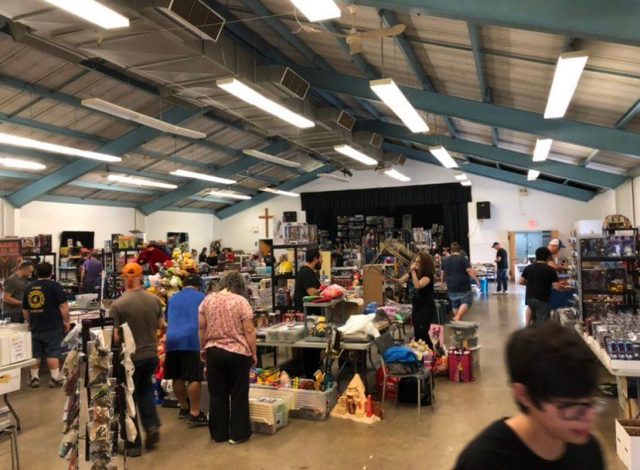 After a COVID-induced hiatus the last two years, the K-Town Collectibles Expo is back better than ever before.

“We wanted to come back bigger and better and have a bigger place, bigger venue, more people, more vendors, more variety,” said William Rice, co-organizer of the event.

The collectables show is on this Saturday and Sunday, having moved on from its previous spot at Knights of Columbus to be able to welcome more vendors and attendees in a spaced-out environment at the Kahnawake Sports Complex.

“There was a bigger demand, and it also gives us a bit more space to space stuff out,” said Eric Ravenelle, also a co-organizer.

He noted they managed to go from 60 vendor tables to 150.

“Now we’re going to have like 10-foot lanes for people to walk in. There’s a good amount of space,” he said with a laugh.

And they’re anticipating welcoming Kahnawa’kehró:non and others in large numbers. Their last show in 2019 drew in over 1,000 paying attendees. That doesn’t count any attendees who were 12 and under, as they don’t need to pay the $5 entry fee.

“We’ve all been cooped up the last two years. It’s good to have something to do, hang out, check out all the stuff,” said Rice.

Attendees can peruse through various collectible items: toys, comics, video games, art, antiques, beadwork, and more. The goal was to have a variety of items to suit a variety of collectors.

“It’s a wide range of stuff because everyone collects different things, so we’re trying to appeal to as many people as possible,” said Ravenelle.

“You go to other shows, and it’s all the same, you know, every table there’s 80 percent comics, you know, two percent toys, and I like to have a good balance,” said Rice.

Just under half of the vendors are from Kahnawake. Among them are Ally & Megan Native Creations, 392 Pepper Company, REEL UM IN bait shop, The Whyte Crow, and more.

There will also be food served at the Sports Complex canteen, and other options are being booked as well. Unfortunately, Rezican Tacos had to back out after initially being included in the programming.

Shopping through various collectible items is not the only activity scheduled for the weekend. Funbounce Inflatables will be on site both days for kids to enjoy, and there will also be an e-gaming setup.

On Saturday, the Forteresse Imperiale Garrison of the 501st Legion will be present. This is the local chapter of a worldwide Star Wars costuming club that attends events and raises money for charity.

Then on Sunday, the International Wrestling Syndicate (IWS) will host a match starting at 1 p.m., with seating available on a first-come-first-serve basis. Kahnawa’kehró:non Kyle Zachary will be making his IWS debut.

“I’m excited for it!” said Zachary.

He noted that it is his first time wrestling as a single within the community in a while, given that the last few shows were as part of the Dad Bod Squad tag team.

“It means a little more work, but I believe I’m up to the challenge!”

He emphasized that he’ll be happy to hear his home crowd cheering him on, and he is hoping to make an impact in his first IWS show. T

Rice and Ravanelle are pleased to finally be able to organize an Expo event since their last one in 2019. They had been looking at organizing them twice a year before the pandemic dashed their plans. The wait will surely be worth it.

“Just to see people; I like to see the smile on everybody’s face,” said Rice. “Bringing back childhood memories, looking at all this older stuff.”