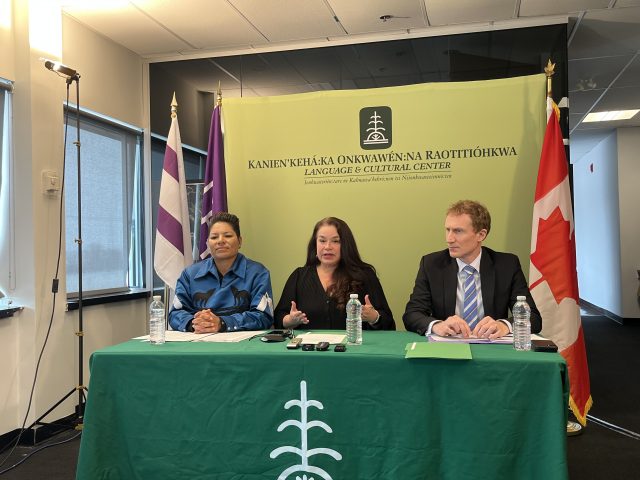 Representing a major step forward in the project to build a new cultural centre, museum and theatre space in Kahnawake, it was announced Monday that the federal government will chip in $16 million.

“We’re thrilled, we’re really thrilled,” said Lisa Phillips, executive director of the Kanien’kehá:ka Onkwawén:na Raotitióhkwa Language and Cultural Center (KOR), at Monday’s press conference. “This is news that we have been waiting for, for a very long time.”

Phillips explained that the project to build a new cultural centre to house KOR, Turtle Island Theatre Company and Kahnawake Tourism has been in the works for six years now.

The $16 million accounts for about half of the current estimated cost to build the new centre. A capital campaign is gearing up to raise the other half.

“I’m so excited about the potential and what this building and this project is going to do for our community in terms of bringing our people together,” said Mohawk Council of Kahnawake grand chief Kahsennenhawe Sky-Deer.

The new centre will also house a museum space, which Sky-Deer noted will provide a valuable space to display Kanien’kehá:ka culture and repatriate artifacts that are currently housed in outside museums.

“We know we have a very vibrant history and culture, and we have so much to showcase,” she said.

The funding comes from the Cultural Spaces in Indigenous Communities Program, put forth by Crown-Indigenous Relations and Northern Affairs Canada. It is a response to a call to action in the final report of the National Inquiry on Missing and Murdered Indigenous Women and Girls (MMIWG) that appeals for safe and accessible spaces for Indigenous women, girls and 2SLGBTQ+ people to connect with their cultures and languages.

“Indigenous communities have long voiced the need for safe, culturally-relevant spaces as a key component of moving forward on self-determination,” said minister of Crown-Indigenous Relations Marc Miller at the announcement.

He spoke of both the national tragedy of MMIWG and the lasting effects of the residential school system, and the potential for healing the cultural hub represents by creating a safe space to learn Kanien’kéha and connect with the culture.

“Under colonization, the Indian Act, residential schools and centuries of racism and discrimination have impacted the vibrant diversities seen on these shores. Now many Indigenous languages are on the brink of extinction,” he said. “Through racist policies, the government perpetuated the loss of Indigenous culture and language and ultimately failed to protect the rights of Indigenous Peoples.”

Sky-Deer noted how the space can also help educate the surrounding communities about Mohawk customs and values.

“We live so close to a major metropolitan city, Montreal, and all the surrounding communities. People need to learn about who we are as Kanien’kehá:ka people; it’s so important, and it will help us to forge better and positive relations in the future,” she said.

To Phillips, it was crucial to acknowledge the elders who have passed and those who are still with us.

“The memory of them is very important to us, and this building is something that they have also wanted,” she said.

She also noted that it was unfortunate the late MCK grand chief Joe Norton would not be able to see the cultural centre completed, “but his memory is completely wrapped within this project.”

Jessica Hernandez of the Turtle Island Theatre Company also spoke a few words about the significance of the project for the theatre.

“The news about this funding is such a dream for us at the theatre, especially because we don’t have a home, and this is really going to (provide) the tools that our youth, our elders, our children really need to develop,” she said.

The projected start time of the construction is fall 2022, which Phillips and Sky-Deer both acknowledged was ambitious. However, Sky-Deer noted that they are confident that the capital campaign will raise the funds required for the project, so they do not need to wait until the entire estimated total of $32 million is accounted for to break ground.

It will take about two years for the construction to be completed.

Phillips thanked the MCK for supporting KOR throughout the years and the people who make KOR the vibrant, essential community space that it is.

“I want to thank my staff, my Kanien’kéha Ratiwennahní:rats students who have stuck by us throughout all these years working in not a great environment,” said Phillips. “I am very proud to be part of this family, so niawenhkó:wa.”