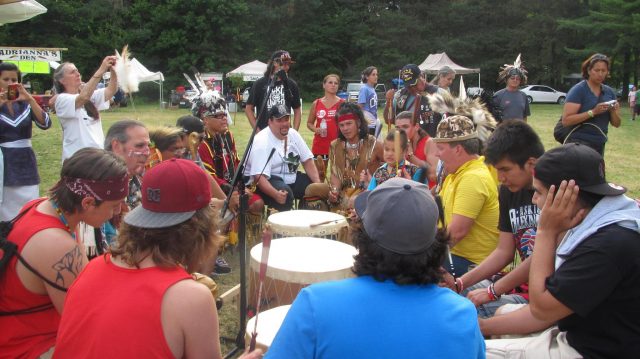 After a two-year pandemic-related hiatus, the Kanehsatake Annual Pow Wow is finally back, and people are excited!

And if social media activity on the event’s Facebook page is any indication, the turnout will be the biggest yet.

Community member Shirley Bonspille, who helped organize this year’s powwow, said that vendors will be arriving on the grounds today (Friday) to set up for what will likely be a very busy weekend.

“Then once they’re all set up, usually there’s a small gathering, our drum groups will come in, and sometimes they will just do like a small social. And it’s just a nice hangout day,” said Bonspille.

“On the weekend, people usually start coming in around 9 a.m. because we have our grand entry at noon.”

Although she was not aware of the number of vendors that will be at the powwow, she said that two weeks ago, they only had about eight spots left.

Bonspille also said that prior to COVID-19, the annual powwow, which was started in 2009, had always been a hit with locals and non-locals alike.

“We had a good turnout both days. Sundays are usually better. We get a better crowd on Sundays. A lot of people came from out of town. Montreal, Ontario, a lot of people attended. It’s fantastic, and all the different nations that come in as well, which is amazing. I love it,” she said.

Although the Kanehsatake Annual Pow Wow is traditional, meaning it’s not competitive and there are no cash prizes, many dancers still participate in the traditional dances.

“They usually come dressed in their regalia and dance. Everyone is welcome to come and participate,” said Bonspille.

Savannah Matteini-Gabriel said that she was really looking forward to the food.

“I went to the Landback Pow Wow last summer, which was pretty similar, but I’m excited nevertheless!”

The food is usually a major attraction for attendees, and this year will not disappoint.

According to Bonspille, attendees can expect a lot of familiar faces when it comes to food vendors, as many have also participated in the past.

“We do have a couple of new ones. I hope that Adrianna’s Den will be there. They’re one of the best, most popular food vendors out there.

Bonspille said that she is very happy to have the powwow back since it always brings the community together, and people can just have a good time.

“I look forward to two things, bringing my Metis friend to dance, and second, to connect with a couple from Maniwaki concerning her project involving the Seven Nations confederacy. I can include a third, to dance and eat a bison burger on frybread and walleye nuggets for a later snack,” said Tom Dearhouse.