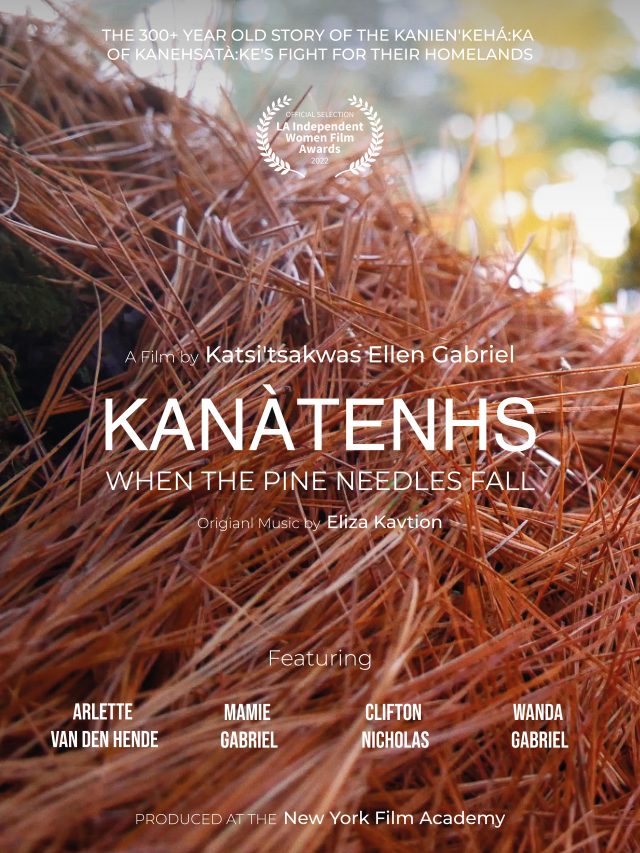 In just 20 minutes, Ellen Gabriel has turned 32 years of reporting on its head, with the debut of her documentary film, “Kanatenhs – When The Pine Needles Fall,” which recently won Best Short Documentary from the LA Independent Women Film Awards eighth edition.

The film details what happened in the Pines on July 11, 1990, the night police raided a barricade set up by Kanehsata’kehró:non and sparked the 78-day standoff.

“This paramilitary force arrived at 5:15 in the morning in the Pines,” Gabriel told The Eastern Door, describing a key focus of the film: women of the resistance. “The women who went to the front, who didn’t have any guns, who just went with our hands up, and were assaulted by tear gas and concussion grenades.”

The significance of this story runs deep for Gabriel, as Kanesatake and Kahnawake’s resistance in 1990 sparked a rise of Indigenous movements across the territory and catalyzed the Royal Commission on Aboriginal Peoples, which led to the Truth and Reconciliation Commission of Canada, which in turn, led to the current papal visit this year with the pope.

“During that summer, the government treated us as if we were inhuman, as if we deserved what we got, just like in the Indian residential schools,” said Gabriel.

In this period of reckoning, Gabriel hopes that by winning this award, her film will reach a wider audience and help to educate the public about the ongoing land dispossession that Onkwehón:we nations face, the Pines included.

“I wanted to tell our story from our perspective of what happened,” Gabriel said. “Reclaiming the narrative, for me, was extremely important because I want people to know the role that the women played during this time, the role women continue to play in defending our lands.”

The film works to correct long-standing misinformation, confusion, stereotypes, and inaccuracies about Kanien’kehá:ka people that have permeated national and international news coverage and influenced public opinion about the Siege of Kanehsatake. More than 30 years later, Gabriel sees it is more important than ever to correct these mistakes.

“I haven’t heard the truth in any of the accounts. People still call it ‘Oka Crisis,’” Gabriel explained. “I prefer the Mohawk Crisis if anything because Kanesatake is not Oka. Oka is the colonial-imposed name for the community of Kanesatake. There’s so many inaccuracies.”

While Gabriel appreciates Alanis Obomsawin’s award-winning film about the so-called Oka Crisis, Kanehsatake: 270 Years of Resistance, Gabriel noted its shortcomings too. “It just tells a really small, small piece of the story,” she said.

Her determination to right these wrongs led Gabriel to study. She worked on the project while learning documentary filmmaking at the New York Film Academy (NYFA), where she developed skills as a filmmaker, and shared stories from her community.

“I have to say that after I met Ellen, my point of view has changed,” said Amelia Deschamps, a journalist and documentarian from the Dominican Republic who studied with Gabriel at the NYFA. “I didn’t know that till today there are fights for the land, and there are divisions.

“Another thing that I learned is how important is the environment for Indigenous communities, and how they see the world from a different perspective.”

By focusing on the role of women in the film, and distinguishing their role from men, Gabriel course-corrects a story that before now, has never been told from the Kanien’kéha:ka perspective.

This refocusing is important when considering the huge attention that Mohawk warriors and military conflict garnered in media accounts as well as documentaries about 1990. Attention often focuses on the 78-day standoff, and ignores the root of the conflict: the land, and the people connected to it, according to Gabriel.

“When people think of the crisis, they think of men with bandanas and weapons. They don’t think about the women that went to the front and tried to negotiate with police,” Gabriel explained.

“We have a developer Mr. (Gregoire) Gollin who lied, has built more homes on it, and totally ignores our rights. We’re being squeezed into smaller tracts of land,” she continued. “And we have our own people cutting the Pines for their own economic benefit.”

The film makes clear that colonialism is not a thing of the past, but is ongoing.

Gabriel saw this film as the coming together of many friends and family who participated in telling the story, as well as contributing their knowledge to strengthen it.

“She has the sensitivity of an artist and every film that she makes, she makes it like it’s an art piece, but also in the way to teach you. Ellen is a great teacher,” said Oreana Franchy, a documentary filmmaker for the United Nations and classmate of Gabriel at NYFA. “I have learned so much from her.”

This is evidenced in the title, “Kanatenhs – When The Pine Needles Fall” which holds an important meaning. “It is about the trees and protecting the trees, but it means so much more – that they are our family,” Gabriel said. “When the final needle falls, it’s the end of us.”