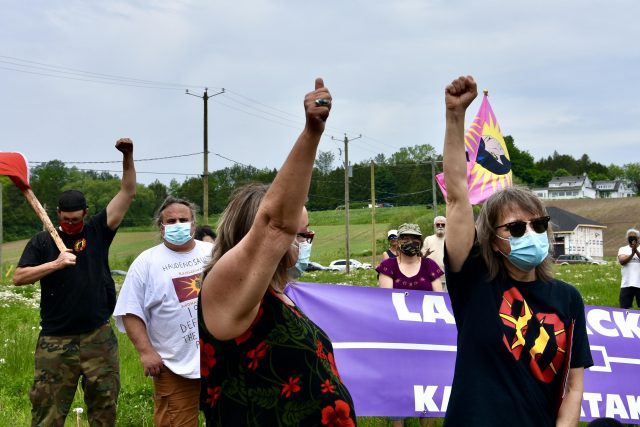 “When I hear (Crown-Indigenous Relations) minister Marc Miller saying that reconciliation is done by giving back land, I am not happy to hear that,” said Oka mayor Pascal Quevillon during a council meeting held on Tuesday, January 18.

“There were lands given in 1990 – now if there are other lands given 30 years later and then again in another 30 years… At some point, where will the municipality of Oka be? Will we still exist?”

Although Land Back wasn’t on the session’s agenda Tuesday, the topic was discussed at length by the mayor following the vote to adopt a motion to reinstate residential zoning in a sector designated as an environmental conservation area in October 2020.

The area in question consists of a portion of the Pines – excluding the Golf Club – as well as lots owned by residential developer Grégoire Gollin.

After six of seven council members voted in favour of reestablishing medium-density residential zoning for the designated territory, as is defined in the municipal bylaw, Quevillon was straightforward about the intention of the motion.

“It’s an $8 million lawsuit we received from (Gollin), so by putting the zoning back to what it was before, we would avoid the big part of this lawsuit,” said Quevillon during the virtual council session. “Eight million is the equivalent of our annual budget – the citizens of Oka can’t afford to pay that.”

According to Gollin, several attempts had been made to advocate for his interests as a landowner prior to his lawyers filing a multi-million dollar lawsuit to the Superior Court in late October 2021.

In the early 2000s, Gollin had purchased several lots in the municipality, which are now the site of homes built on what is known as Oka’s Domaine des Collines. While the expansion of residential units in the neighbouring area has stirred grief among Kanehsata’kehró:non calling for ancestral land to be returned, Gollin said he has maintained his position not to develop the portion of the forest under his name.

“I’m suing the city not because I have any intention of developing the area, but in order to restore the value of this land,” he told The Eastern Door. “Besides, I’m still obliged to a moratorium on any new development on vacant land in Oka that belongs to me that I signed with the former (Kanesatake) council.”

The mutual agreement marked the beginning of a process to transfer Gollin’s approximately 60 hectares of land in the Pines through an ecological gift.

In anticipation of this action being finalized, Oka passed a motion to designate the forest at the heart of the Siege of Kanesatake as a heritage site – therefore instantly impeding any potential land transfer through the federal ecological program.

“In my opinion, the rezoning was to punish me as a property owner by taking away a significant value from my land asset because I have been engaged in a dialogue with the Mohawk Council for a few years,” said Gollin. “The mayor is trying to punish me because for him the restitution of land means Oka will disappear.”

According to the developer, despite the rezoning being reverted, the value of his lots hasn’t yet been fully restored since the heritage site title still gives the municipality veto power over what can or can’t be done with the land. Gollin said his lawyers will guide him to decide on what to do next.

A separate lawsuit had previously been filed by the Mohawk Council of Kanesatake (MCK) requesting that the heritage site designation be removed. The lawsuit has since been suspended.

Meanwhile, Kanehsata’kehró:non remain vocal about what should be done with the Pines.

“At the end of the day, they do not have the papers that say that we have surrendered this land to them,” said Rotinonhseshà:ka of Kanehsatà:ke spokesperson Katsi’tsakwas Ellen Gabriel.

“I don’t care about their versions of history – this is plain theft and we shouldn’t have to go to the courts to defend our lands.”

While denouncing the federal government and St. Sulpice Seminary as the inherent culprits that have created this problem, Gabriel pointed at the continued hypocrisy pushing the original agenda of dispossessing Kanesata’kehró:non from their lands.

“We are still dealing with the dysfunction and systemic racism of colonization today,” said the Onkwehón:we rights activist. “I don’t think that the municipality of Oka or Mr. Gollin were ever sincere in anything they ever had to say about reconciliation and this is proof of it.”

In a continued effort to make the voices and grievances of community members heard, Katsi’tsaronhkwas Stacy Pepin took to social media to share a petition calling on Canada to carry through with true reconciliation.

“Land theft and breaking a nation’s right to sovereignty are no longer being tolerated,” said Pepin. “This cannot happen now or in 30 years from now – the cycle of destruction and injustice to Indigenous people and lands needs to end.”

To help grow the number of signatures, she took the initiative of spreading awareness about the issue with a TikTok video that garnered over 6,000 views and close to 600 shares in less than a day.

“We already have issues with land greed on the territory from within, we don’t need something resembling what happened in the 90s to happen again 32 years later,” added the community member.

Avoiding history repeating itself is also what has been on the mind of John Harding since he watched the latest Oka council meeting unfold.

“Much of our lands have been swallowed up in the past in the exact same manner,” said the Kanehsata’kehró:non. “Oka’s only motivation appears to be to try to control the lands and control what happens to our territory – all of which absolutely and ultimately benefits them and only them, directly.”

Until land disputes are resolved, Gabriel maintains that the community has to put aside any differences and stand in unison for their sovereign homelands.

“To continue to fight in a system where we don’t have rights, where we can’t defend our rights and are criminalized – it all speaks a lot to how sincere Canada is about human rights and the defence of human rights,” she said.

“This is supposed to be an era of reconciliation according to prime minister Justin Trudeau but there’s no evidence of that in Kanesatake.”