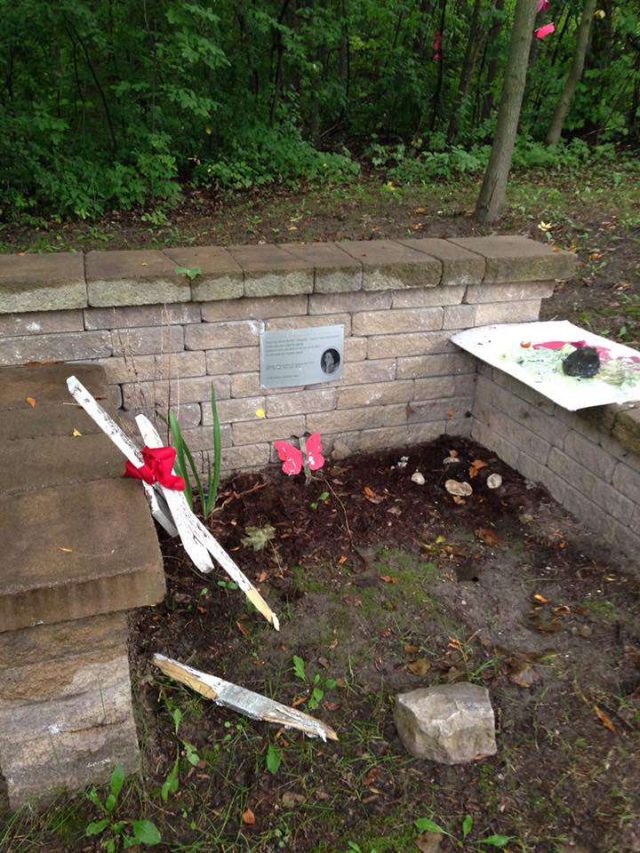 The cross made by the late Jack Morrison to honour his daughter Tiffany, who murder remains unsolved, was vandalized, broken and thrown onto the access road, leaving the family with grief and anger. (Courtesy Darian Jacobs)

“Absolutely unbelievable,” said Melanie Morrison with tears in her eyes after the cross, made by her late father and decorated by her daughter, was found by a town worker on the access road between Highways 138 and 132 this week.

The cross was made for Melanie’s sister Tiffany Morrison, who went missing in 2006, and whose remains were found four years later in the area that is now Tiffany’s memorial site off the bike path, running beside the access road under the Mercier Bridge off ramps.

The cross appears to have been vandalized between Tuesday night and Wednesday morning.

Morrison sat at The Eastern Door yesterday recounting how a town worker told her that something happened to her sister’s cross.

“He said her grave site, which I associate with the cemetery because we have a cross there too,” she said.

Melanie went by the cemetery Wednesday with her daughter, Darian Jacobs, and noticed everything was okay. It was only later in the day that Melanie thought it might be the cross that was installed firmly in the ground at the place where Tiffany was found.

“I didn’t even think someone would be sick enough to do something to the memorial site,” she said.

Melanie went to the memorial site yesterday and saw what had been done to the cross.

“We found it busted and laying against the memorial,” said Melanie, who spoke to a worker, who told her that John Mayo had seen the cross on the access road, and placed it back at the memorial site.

“We’re going to have to make a new one, but it’s irreplaceable,” said Melanie. “My father, who passed away, (Jack Morrison) made it, my daughter (Darian Jacobs) did the artwork. It can’t be replaced.”

The blatant and senseless act of vandalism has left the family frustrated, angry and confused why someone would do such a thing.

“I don’t know how kids or adults or whoever did this can think it’s funny or okay to destroy something where somebody was killed, and then something that the family put there to help them heal with the tragedy,” said Melanie choking back tears. “To just destroy it and not have any common sense…”

Town workers check on the site every Monday and Friday, and the family has cleared some trees, so the site is more visible. However, overgrown brush and foliage make the site invisible for motorists, which is something Melanie would like to see changed.

In the past, those cleaning the site have found garbage, alcohol and drug paraphernalia at the site.

June was the 10-year anniversary of Tiffany’s disappearance.

Those with information about the vandalism are asked to call the Peacekeepers and ask for officer Jeffrey Diabo. The file number is KAH16-5492.