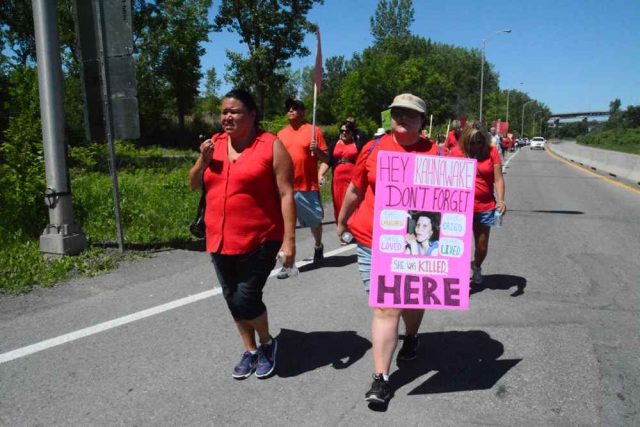 Ten years after Tiffany Morrison went missing, around 100 community members and other supporters gathered to draw attention to a crime that has never been solved. (Jessica Deer, The Eastern Door)

Chanting “speak up, answers now,” dozens of community members marched around the foot of the Mercier Bridge last weekend to demand justice for Tiffany Morrison.

It’s been 10 years since the 24-year-old mother’s life came to a tragic end.

“Ten years is too long for somebody to sit and wait for answers,” said her sister Melanie Morrison.

Melanie organized Saturday’s vigil and march to mark the decade that passed since her younger sister’s life was taken.

“I fight to keep my sister’s story out there. I fight the conversation going. Her file is open – it’s not a closed case. We need everybody’s support and efforts to keep their ears open,” said Melanie.

Tiffany was last seen leaving the Hiraki Bar in LaSalle to take a taxi back to Kahnawake on June 18, 2006.

Her remains were found in a wooded area beside the Memorial Bridge four years later. In 2011, the area was transformed into her memorial site.

Hundreds of red butterflies made by students at Step by Step Child and Family Center, Kateri School and Karonhianónhnha Tsi Ionteriwaienstáhkhwa were hung from the trees at the memorial on Saturday to represent missing and murdered Indigenous women (MMIW).

“They’re helping the children understand what is happening to our women, what happened to my sister,” said Melanie. “I think it needs to be more brought out to our youth, to our students, that this is an issue and has happened in our community. It is not just an out-West issue.”

Melanie said she hope’s Saturday’s event will rekindle Tiffany’s file, which is being investigation by the Sûreté du Québec. The family also has a $75,000 reward for anyone that provides information that leads to the arrest and conviction of the person responsible for her death.

“She was a human being. She was a mother, a sister, a daughter, an aunt, a cousin, a friend, an acquaintance. She meant a lot of things to a lot people. It’s not just the family that got hurt when her life was taken,” said Melanie.

Joy Deer was one of Tiffany’s many friends that joined Saturday’s march.

“Tiffany was my best friend,” she told The Eastern Door. “I was with her the day before she went missing. I miss her a lot.”

Deer said she feels events like Saturday’s brings hope that justice will come to Tiffany and her family.

“If we keep on fighting for awareness and showing that we still care. There’s hope. All it takes is one person to say something. There’s got to be one person that knows something and if we keep doing this, maybe that person will want to talk so that we can let her rest properly,” said Deer.

Melanie said her family lacks closure because nobody’s been held accountable for the crime.

“A lot of people have the thoughts that once we got her remains back there was closure. Because of the way my sister lost her life, there is no closure until somebody is accountable for what was done to her,” said Melanie. “As a community, it should be all our purpose to bring forth people who have answers, make them speak up, and not let it just disappear into the background.”

“Quebec Native Women works to support the family. We do need justice. The family needs answers. We have that right,” said Michel. “In memory of Tiffany, on her 10th anniversary of disappearance, in memory of the 1,200 women that have disappeared, we don’t want to lose anymore. We have collective work to do to make pressure against the government – against our own government – that justice be made.”

Rhonda Kirby and Kahsennenhawe Sky-Deer were among the handful of Mohawk Council of Kahnawake chiefs that participated in the march.

“Whatever we can do as a political body to get involved and bring awareness and try to get some movement from the federal government as to why this is happening to our women. There’s no other nationality that is being murdered like this. It is just unbelievable,” said Sky-Deer. “I wanted to be here to stand in solidarity with our community members who feel we are not going to be quiet about this issue until we get some resolve.”

Tiffany was just a few years younger than Sky-Deer.

“I do remember hanging out with her when we were younger. When this happened I wasn’t living here, but I remember how I felt,” she told The Eastern Door. “It is just so unfortunate that it took them so long to get some closure, but really needs to happen is justice. Continuing to come out like this as a community with the family and showing that we’re hoping one day the family will get justice.”