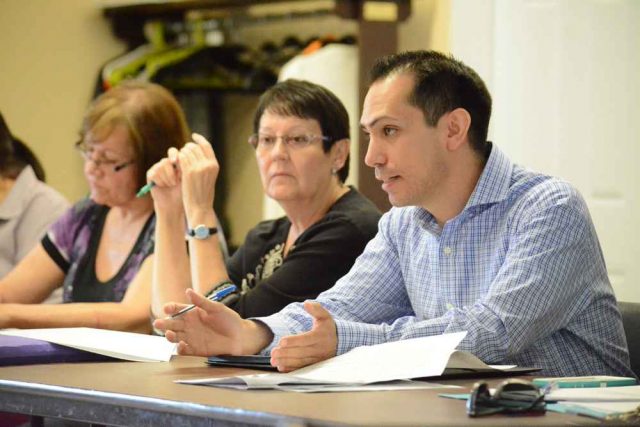 Debates over blood quantum were drawn-out Tuesday evening as participants continued to struggle with defining “Kanien’kehá:ka great-grandparent” at the latest Community Decision-Making Process hearing on the Kahnawake Membership law.

Although the foundation of the law is based upon an applicant having at least four Kanien’kehá:ka or Onkwehón:we great-grandparents, there’s never been a definition for the term.

Earlier in the year, some participants felt the proposed definition of having “some lineage” was too vague. The four subsequent meetings have revolved around discussions of adding a minimum blood quantum requirement to alleviate concerns.

“The requirement should be at least 50 percent. If we’re trying to get back our lineage in the future, I know for some people it is very tough, but sometimes we have to be tough to protect our future,” argued Dale Dione at the meeting, which took place at the Golden Age Club.

“We have to build our bloodline up… not down,” argued another person in favour of blood quantum.

Quantifying the definition didn’t sit well with everyone in the room, including Mohawk Council of Kahnawake grand chief Joe Norton.

“The (blood quantum) is not our term. That’s not ours. We’re using the white-man colonialistic thinking and we have to get the hell away from that,” he said.

Jeremiah Johnson, who was a community representative on the law’s drafting team, said the two-tiered system already exists in the community, pointing out the blood quantum criteria to be eligible to run for council.

“The election law does that,” said Johnson. “There are already members that we’re discriminating against.”

“Two wrongs don’t make a right,” responded Fleischer. “It doesn’t mean we should be doing it anywhere else.”

The same issue was argued at the prior meeting on May 17, when concerns were raised about the number of people currently listed on the Kanien’kehá:ka Kahnawake Registry (KKR) that have a blood quantum that is less than 50 percent.

“You’re cutting out all those people,” reiterated one of the participants on Tuesday. “I’m thinking of people who know more culture and language than I do and they’re not going to be considered a great grandparent because you want it to be 50 percent.”

Many in the room expressed a growing frustration with the direction of the discussion.

“It seems like we’re fighting the (resource) table,” said one community member. “Every time a consensus comes in, you guys always make sure to knock it down.”

“All we’re doing is putting up scenarios for you people to make decisions,” responded council chief Arlene Jacobs, who is a membership portfolio chief along with Kahsennenhawe Sky-Deer. “We’re just trying to put things out there to make you see what could happen down the road.”

A vote was conducted toward the end of the meeting asking if anyone was comfortable using blood quantum terminology. Only four people raised their hands, while the rest preferred to use a word in Kanien’kéha.

Sky-Deer said Sha’teienekwenhsi:hen, which means half blood in Kanien’kéha, is more liberal than a 50 percent blood quantum.

“It gives that grey area that some of us are concerned about,” she said.

Not everyone was a fan of the Kanien’kéha term.

“I find putting this term in is ridiculous because half means half and we should be using blood quantum. I don’t know why this term was put in there – it’s too vague and it’s too open to interpretation,” said one participant.

Even Jacobs had some qualms about it.

“How do you judge that? How can you determine an equal mix without any sort of benchmark?” said Jacobs. “It’s okay to throw a word in there, but we have to know what it means if we’re going to pass this.”

According to the Kahnawake Legislative Coordinating Commission, preliminary consensus was reached by all participants to submit a draft definition for Sha’teienekwenhsi:hen as ‘a person who comes from two cultures in approximately equal measures’ with the proviso of having 47 percent or more blood quantum.

The discussion continues at the next hearing on Tuesday evening.

Read next week’s Eastern Door for a full CDMP recap.