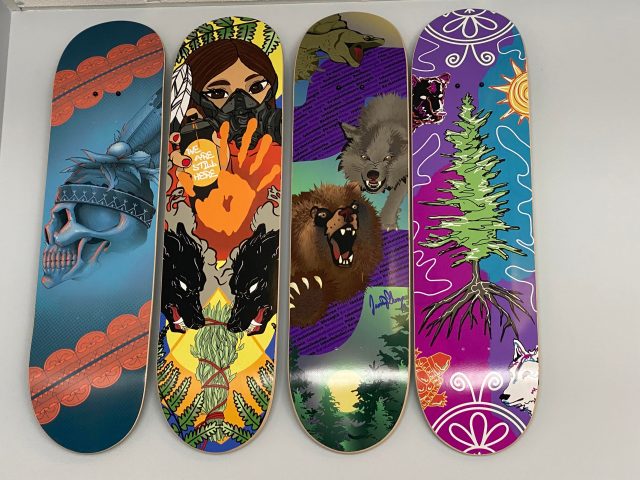 Berwick, of the Kanien’kehá:ka Onkwawén:na Raotitióhkwa Language and Cultural Center (KOR) photo studio, wanted to do something special for this trifecta of occasions. When he found a company that prints artwork onto skateboards, the idea grew into an initiative connecting Kanien’kehá:ka communities.

“It’s about connecting communities through artwork, but also skateboarding, and it’s to ultimately to get the kids out there being active,” he explained.

Four artists – two from Kahnawake, one from Kanesatake, and one from Tyendinaga – contributed original artworks reflecting Kanien’kehá:ka culture that were printed onto 200 skateboard decks. The decks were divvied up between the three communities and are now available for purchase.

He said that the community response has been very positive, with some designs already sold out in Kahnawake.

Kaienté:ri McGregor is one of the two Kahnawa’kehró:non artists who participated. “I was invited to showcase my artwork, and I jumped at the opportunity since it was such a neat and cool concept,” she said. “I also longboard, so the idea of having my own deck art was really exciting!”

The deck she designed depicts an orange handprint in the centre, with a woman holding up a can of spray paint that reads “We are still here.”

“The concept came from the heart since we were mid-discovery of the skyrocketing numbers of our missing brothers and sisters from residential schools, and I remember just doodling up what I felt since it was a hard and awful feeling, knowing we are still here and we shall always be,” McGregor explained.

“I saw the flyer that said ‘artist NEEDED,’ and it’s one thing to just say ‘Hey anyone, submit some art,’ but I figured I could do some good if I was needed and not just another call out for cheap design work,” said Kanehsata’kehró:non Jasmin Gunn.

“I submitted some sketches, and I was told one looked strong, and it reflected some of the things the review panel was looking for.”

Since the project was organized by KOR in collaboration with the language centres in the two other participating communities, Gunn included some Kanien’kéha words and their translations in her design.

“I also included elements in my design that are important to Kanesatake: our pine forest and the three major clan animals,” Gunn explained. “I made sure they had the spirit of being battle-ready and tough, to reflect the strength you need to go out there and hit the pavement, fall down and get back up again.”

Hitting the pavement is the next part of the project. Berwick said that in the next few months, they will be planning activities to be held on June 21 as part of Go Skate Day and National Indigenous Peoples Day.

“We’re still developing the day itself. We’re hoping to do a few more activities than just skateboarding,” said Berwick, such as a spraypainting activity for the kids.

In the meantime, Kahnawa’kehró:non can buy them directly from the KOR, with all proceeds going towards the activities for Go Skate Day.

Community member James Day bought all four decks to bring home. “I wanted to get them that night. Anything novelty, like art and stuff like that, especially from our people and other reserves – Amazing. Totally in 150 percent for support,” he said.

“I was really blown away,” he continued. “Wrapped in plastic, well-presented, super nice.”

KOR has already sold out of the two Kahnawa’kehró:non designs, but the two others remain available.

In Kanesatake, the boards can be purchased through Kontinónhstats Mohawk Language Custodian Association, and in Tyendinaga through Tsi Tyónnheht Onkwawén:an.