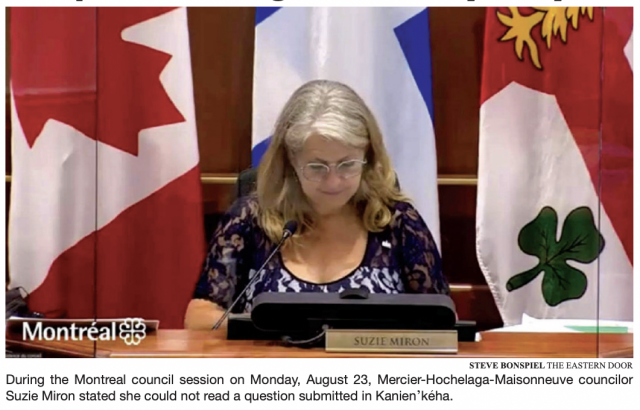 A question was submitted in Kanien’kéha at the Montreal municipal council session on Monday, August 23, but was never read out loud or answered, as it was dismissed under the pretense of being neither posed in French, nor English.

The two Montrealers who sent the question regarding the protection and promotion of Indigenous languages have since come forward to denounce what they call an appalling response from the Projet Montréal administration.

“It is quite stunning that given the time between receiving the question and question period, and given all the resources at their disposal, City Hall refused the question,” said one of them, who asked to remain anonymous for fear of professional repercussions.

The question, which was meant to be read during the session’s question period, underlined that with Indigenous issues at the forefront nationally, alongside elections in sight, asked what Sud-Ouest councillor Craig Sauvé proposed as a plan to protect and promote Indigenous languages.

“They begin each meeting acknowledging that they are on First Nation territory. Yet, there was a question in a First Nation language and they had no way to even address it,” said Fidel Fuentes, who submitted the question.

While the question submitted was regarding all Onkwehón:we languages spoken on the island, it was translated by a Kahnawa’kehró:non Kanien’kéha speaker as the city is on traditional Kanien’kehá:ka territory.

“It only made sense to ask the question in an Indigenous language, so we got it translated into Mohawk,” explained the anonymous Montrealer.

During the session on Monday, Mercier-Hochelaga-Maisonneuve councilor Suzie Miron was in charge of reading questions. When she reached the Kanien’kéha question, Miron stated, “It is impossible for our team to analyze it or even for me to read it.”

Miron proceeded to invite that the question be sent again in either English or French, at which time she would be “happy to read it.”

The Eastern Door reached out to the City of Montreal and councilor Sauvé, but they did not respond in time for publication.

This was the second question posed in a language other than French or English to be dismissed by the council that day.

Historian and activist Donovan King submitted a question in Irish regarding the proper consultation of the city’s vibrant Irish community on important issues affecting the group.

“The city didn’t even bother to translate the question or answer it,” said King, referring to his question which was also swept aside by councillor Miron. “Why isn’t there a budget to translate these questions?”

However disappointed he was to have his submission unaddressed, King emphasized that this city owes a debt to Kanien’kehá:ka people who have long occupied this land.

“More importantly than the Irish question not being answered, I find that them not answering a question in the Mohawk language is extremely disturbing in the age of truth and reconciliation,” he said.

For Fuentes, who spent a decade volunteering to help Projet Montréal get elected, this latest blow represents a continuation of failed promises and missed opportunities by the city’s administration.

The anonymous source who submitted the question alongside Fuentes further expressed that Montreal needs to recognize that Indigenous Peoples are at the core of the city’s foundation.

“Our city’s flag comprises images representing five founding peoples, and the central one is Indigenous.”