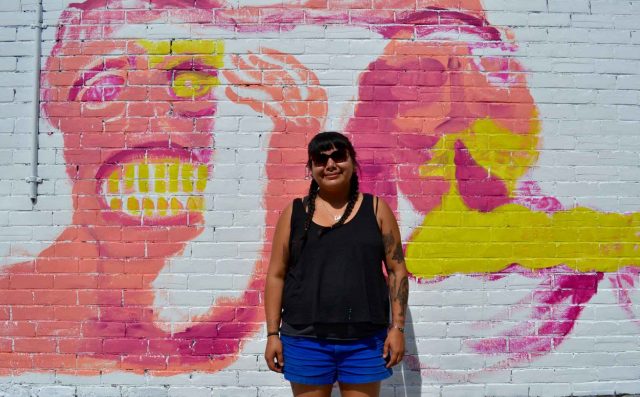 Ten Indigenous artists are in the process of painting large-scale murals in the area as a part of Unceded Voices, a biennial convergence of Indigenous-identified women and women of colour street artists in Tiohtià:ke.

“I see St. Henri rapidly changing, you can see this clear gentrification of the businesses that are going up and the people that are actually living there, and there’s a lot of class differences. It’s nice to see a lot of Indigenous voices and clear visuals from different folks also breaking that up,” said Dayna Danger.

Dayna, an emerging 2 Spirit/Queer, Metis/Saulteaux/Polish artist raised in Winnipeg, said it meant a lot to be a part of the festival.

“There’s the whole colonial history of land being taken away, and I feel like it’s sometimes nice to be able to take those spaces back. Maybe we can’t occupy the land, but you can at least occupy space with your visual message,” she said.

This month marked the third summer that Unceded Voices has taken over the streets of Montreal, with the goal to develop a network of solidarity and support between Indigenous women/2Spirit/Queer and women of colour street artists and to promote anti-colonial resistance through diverse street art interventions.

“Indigenous women/2spirit/Queer and women of colour are underrepresented in art milieu on Turtle Island, especially in street art, and often excluded from or feel unsafe in public spaces,” read a statement from the organizers on their website.

“For these reasons, Unceded Voices especially encourages young women to participate in the street art-making workshops and promotes their empowerment to take space in a white male-dominated milieu, with support and as a collective.”

Dayna collaborated with Ojibwe multi-media visual artist Jessica Canard to paint a mural of buffalo inspired by their experience at a sundance ceremony.

“In the arbour, there’s this one buffalo and people put their tobacco ties on it, and that’s why we’re pulling up that imagery,” said Canard.

“Being able to be a part of this particular event for Unceded Voices is really special because it’s a bunch of women-identified Native artists coming together and giving our voice to the street,” said Peters (Ojibwe), originally from Toronto.

“A lot of the time, Native people can be hidden from the spot light or not being properly recognized. The idea of high visibility and just having a part of my spirit out in the world for other people to see.”

While she is often known for her brightly-coloured beaded jewelry, the Concordia University studio arts graduate’s drawings and paintings are inspired by the idea of shapeshifting.

“There’s a lot of energies, or I like to think of them as my ancestors or my spirit. There’s a lot of spaces or heads or bodies that are kind of molding into one another or morphing into different things. People say they look kind of scary or grotesque, but they’re meant to bring good energy,” said Peters.

“I like to question what people think of Native art because what is Native art? We’re just normal people who happen to be a part of this awesome culture.”

Unceded Voices wraps up on Monday. Community members have a chance to hear from the artists tonight during a panel discussion at Articule.