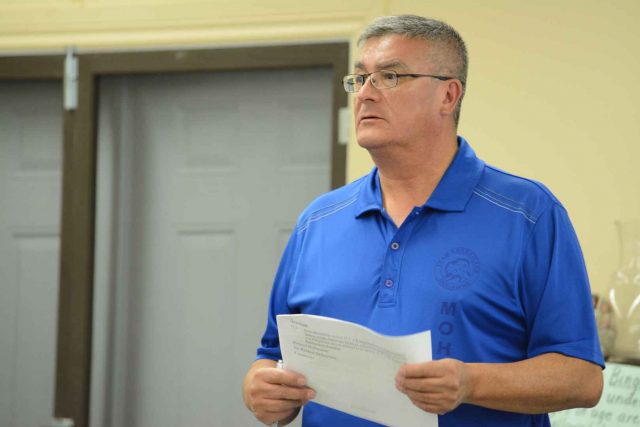 Kahnawa’kehró:non who marry non-Indigenous people won’t be the only ones facing suspension when the amendments to the Kahnawake Membership Law are ratified.

“What we heard was that there should be more justification to suspend a member who is with a non-Indigenous person,” said registrar Rose-Ann Morris.

Around two-dozen participants at the latest Community Decision-Making Process (CDMP) hearing reached a consensus on Tuesday evening to accept the two proposed amendments to section 21.1 of the law, that a Kanien’kehá:ka of Kahnawake who “lives in common law with” or “married, or marries, a non-Indigenous person after May 22, 1981” will have their membership suspended.

“We took the direction that came from the mandate process of CDMP,” said Morris.

While the amendments were accepted with only one minor wording change, the majority of Tuesday’s discussion focused on whether the suspension ought to apply to just residency.

“It seems like a lot of people (who marry non-Indigenous people) are under the impression that if they don’t live here in Kahnawake, they’re not losing anything,” said Kim Norton. “Marry out, get out and stay out – that’s the way I understand it. You lose your rights.”

Mohawk Council of Kahnawake membership portfolio chief Kahsennenhawe Sky-Deer mentioned that the issue was brought up during the consultation phase of the CDMP over a year ago.

“We had another group say that ‘we think if you marry out and leave the community, you’re still abiding by the law,’” said Sky-Deer. “But, if you read it here, it’s contradictory.”

Director of Justice Services Kevin Fleischer pointed out how the common “marry out, get out” saying and what is actually written in the law “aren’t quite the same.”

“The law says one thing and the community custom says something else,” he said. “If someone marries out and leaves, should all their benefits and entitlements be suspended?”

He gave examples of benefits and entitlements that encompass more than just residency, such as voting in council elections, or involvement in many community organizations at the board of directors level.

“Does that mean they can’t come back, run for the Youth Center board or do certain things in the community in that way?” asked Fleischer.

The room was split with their opinions.

“I was always taught that if you marry out, you’ve chosen your path away from your community and you have to accept that – that you don’t get to be a part of these things anymore,” said Jeremiah Johnson, who sat on the law’s drafting team.

Ramona Decaire, who was another community rep on the drafting team, felt the suspensions of benefits, like on reserve education, would curb the amount of children of mixed marriages in the community.

“That’s fine and dandy if they leave the territory. But you also have the people that their kids that come back, they go to school here, they go to the Youth Center – they’re a part of the community, which they shouldn’t be,” said Decaire.

“Isn’t that what we want? We want them to marry back in?” she said.

Some participants retorted with concerns over blood quantum.

“If they’re under 50 percent – if they’re only 25 percent. Should they have a right to learn the language when they’re never going to make it on the KKR? They shouldn’t be allowed,” said Joann Patton.

Others felt the suspensions were exclusionary.

“That’s what the government has been wanting to do to us and thin us out,” said Dave McComber. “If it was me, I’d want to come home – I’d want to be welcomed home and so would anyone else. We need to find ways to strengthen our community, not diminish it.”

Council chief Bobby Patton felt the suspension ought to only apply for marriage, rather than just co-habiting.

“They’re already off the territory – whether they’re living with a non-Native or not. Aren’t they already respecting our ways by not living here? So why punish them?” said Patton.

“We always say ‘you marry out, get out.’ If someone marries and leaves, why are they being penalized? Then, we’re penalizing children also,” she said.

The next CDMP hearing on the Membership Law will take place tonight from 6 to 8:30 p.m. at the Golden Age Club. The agenda includes discussing the remainder of section 21, as well as sections 22, 23 and any related definitions.