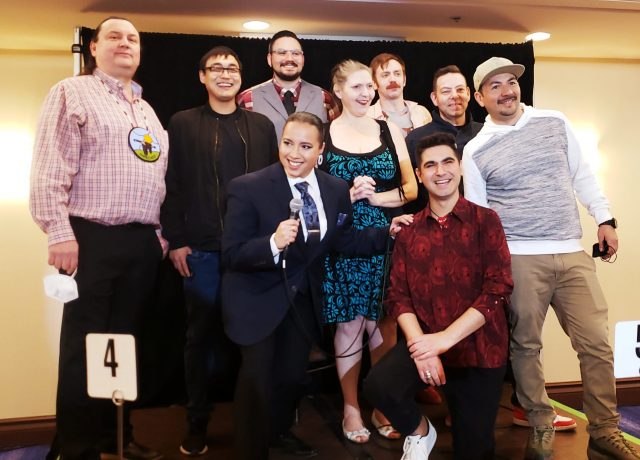 That’s the name of a touring Indigenous comedy show that’s coming to Kahnawake for the first time next Saturday, June 11.

Throughout the afternoon and evening, the show’s attendees will enjoy a three-course meal at Ristorante La Vista while enjoying some comedy produced by Onkwehón:we, for Onkwehón:we.

Janelle Niles, the show’s producer and headliner, said they are eager to mingle with a new community and share some laughs together.

“We’re excited to see everybody’s style of humour, where we can go with it and what they like because even though we’re all Indigenous, we’re all different,” said Niles, a Mi’kmaw/Black comedian from Sipekne’katik First Nation. “I’m very excited.”

The show will be hosted by Jenn Hayward and will also include comedians Mike Bombay and Randy Schmucker.

Niles had reached out to Kahnawake Tourism, expressing interest in bringing her show to the community this summer.

“As business began opening back up, we thought it would be a great time to hold an in-person event where people can come and enjoy a nice dinner with friends and family then a great show,” said Jordan Diabo, tours and events coordinator at the Kahnawake Welcome Center.

It was a friend of Niles’ who suggested she visit. That friend plays hockey with a few Kahnawa’kehró:non and felt like the show would be a good fit in town.

“He was like, ‘Man, you should have a show there. My friends will love your comedy. They’ll like your style.’ So I’m like, ‘Okay, I guess I’m headlining,” she said with a laugh.

Though she is the producer of Got Land?, this will be her first time headlining it.

“I think at this time, I’m ready, and I have the time that they’ll need from me, and I’m really good with crowd work now, so it’s not just spitting out my material. I can talk to the crowd now!” she said.

Hayward agreed with her.

“You’ve really come along,” she replied to Niles, noting that at the beginning of her career, she too had trouble working the crowd.

“I’m so old that I remember when Indigenous comedy was literally just Don Kelly or me for the entire province of Ontario,” Hayward said.

She said that Indigenous comedy has expanded rapidly since those days, thanks in no small part to initiatives like Niles’ that provide a space for Onkwehón:we comedians to hone their talent.

“It’s been a really nice way for people who may not feel as welcome in the mainstream comedy community to have a place that she’s provided, a safe space to perform comedy that sometimes is very rare, specific, and sometimes it’s very cultural, depending on who they are.”

Niles said that the comics all have different styles, so there will be something for everyone.

There will also be a secret guest who will take the stage, but Niles kept tight-lipped about who that will be.

Tickets cost $100 and include the three-course dinner. $10 from each ticket will also go to the Kateri Food Basket.

“The comedy show reflects Kahnawake Tourism’s mandate to promote Kahnawake as a culturally vibrant destination for leisure tourism by promoting Indigenous comedy to the public,” said Diabo. “The comedy show is a fun, safe and a great way to showcase Indigenous talent without disrupting the local environment.”

Because at its most fundamental level, the show is about uniting and entertaining through shared identities and experiences.

Tickets are available at the Kahnawake Welcome Center.