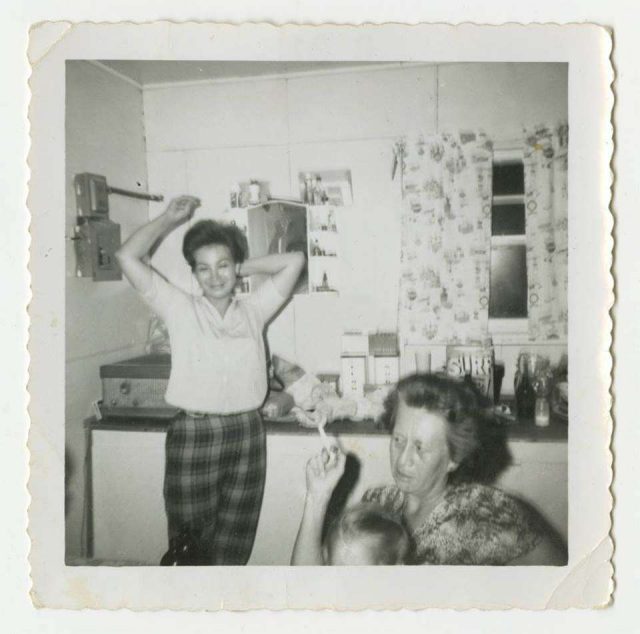 This early 1960s photo of Phyllis Snow (standing) and Mary Armstrong will be among the dozen photos a part of an exhibition for Nuit Blanche tomorrow night. (Courtesy Snow Family Collection)

Kahnawa’kehró:non are the focus of a new installation that opens tomorrow night for Nuit Blance à Montreal.

“Home on Kanien’kehá:ka Territory: Mid to Late ’60s” is a documentary photo collection that will be on display at the SBC Gallery of Contemporary Art (372, Ste. Catherine West, Suite 507, Montreal) as a part of the Wood Land School.

Around a dozen family photos that were sourced by members of ReCollection Kahnawake will be on display.

“The poster girl for the show is my grandmother and my great-grandmother, so that’s cool,” said artist Ange Loft, the lead organizer for ReCollection Kahnawake, a collective of artists, theatre creators, and history researchers working toward a large scale multi-arts and puppetry play to be premiered in 2019.

The photo is of Loft’s grandmother and great-grandmother Phyllis Snow (standing) and Mary Armstrong in their kitchen during 1962 or 1963.

“It’s photos like that, photos from inside peoples houses because there was a big Indian Pavilion as a part of Expo 67 and they presented this sort of narrative around the idea that technology and new culture is eroding away tradition. They framed the whole thing, that Native people across Canada are struggling to keep up with technology,” said Loft.

The Wood Land School is an evolving exhibition created by artists Duane Linklater and Tanya Lukin Linklater. Throughout the entire year, it will occupy the SBC gallery with research and explorations of the visions conveyed during Expo ‘67 of Indigenous life through performance, discussion and poetry. The entire exhibition emphasizes Indigenous self-representation, presence and future through the evocation of future stories for Canada.

Loft, who was asked to be involved with the exhibition, said she wanted the photos featured to propose a different narrative of Kahnawa’kehró:non during that time.

“In Kahnawake particularly, because we’re so close to the city, we’ve always kind of rolled with technology and cultural development. We’ve used these things to inform the way that we live. We’ve always been very savvy, fashionable and high tech in Kahnawake, especially compared to other reserves,” she said.

ReCollection Kahnawake also produced an audio piece for the exhibition titled “Fine, but don’t shove it down our throats.” It’s just one episode in a series of community arts research and performance initiatives by the collective that were pulled from oral interviews with family members of ReCollection Kahnawake as a way to fill in gaps in their research.

“It’s this blended narrative about agency,” said Loft about the episode. “It points to historical choices that we made.”

The 45-minute piece, which touches on subjects from post-contact migrations onto the banks of the St. Lawrence River to contemporary issues of land access, will be playing aloud over the speakers in the exhibition space during the installation for Nuit Blanche.

“After the night, it will move to a headset. So, you can go to the exhibit and listen to the whole piece on a headset or listen to as much as you like,” said Loft. “It’s going to be a part of this evolving exhibition that will be up for at least another seven months.”

This is just one phase of a large project ReCollection Kahnawake is producing.

“This is just one thing that is informing our larger show. We’re still going to be doing our big outdoor production in 2019, but this is one of the time periods that we’re interested in for character development in the production,” said Loft.