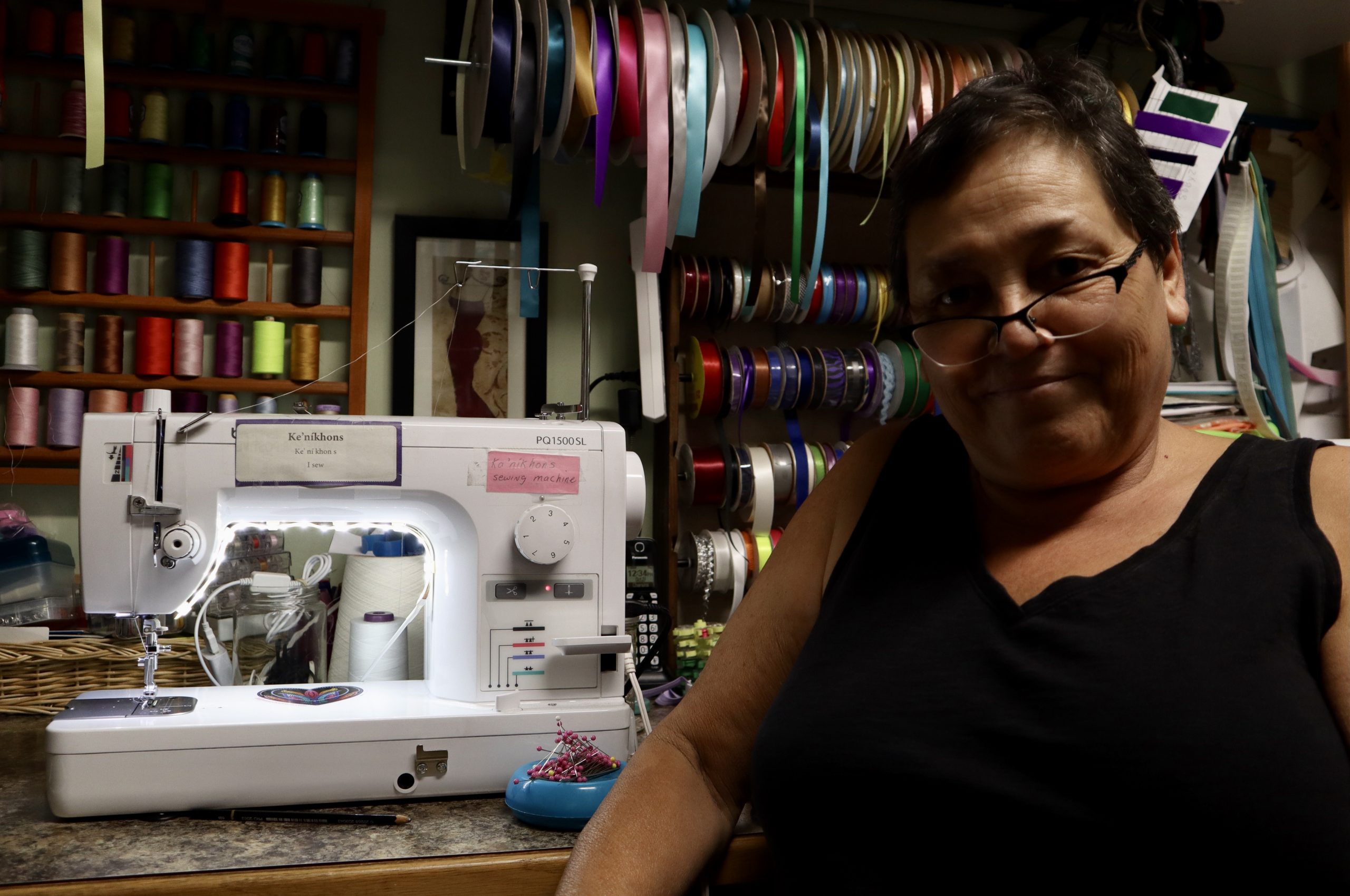 “I look forward to it every Friday. I can’t wait to see it. Sometimes when I read it, it makes me laugh, it makes me go back in my memory,” said Peggy Mayo-Standup. “I like all of them. But I especially like the stories with Joe McGregor and his wife Amelia.”

Mayo-Standup was emphatic when asked what she thought about “Sharing Our Stories,” The Eastern Door’s (TED) emerging language project.

“The young people will get a better grasp of what Kahnawake was before, what it is now, and what it can be. And a lot of it is with the preservation of our language. That’s the most important thing because everything that you do, every story that’s been told, is being translated into Kanien’kéha, and that to me is one of the most important things,” Mayo-Standup said.

Mayo-Standup is not alone in her thoughts. The movement towards Tsi Skarihwaiénthon – replanting our seeds – is community-wide, with many incredible initiatives emerging from sheer determination and passion. Sharing Our Stories is one such initiative.

“My vision has always been to share those stories with the people,” said Steve Bonspiel, editor/publisher at TED. “The project itself, it’s been a long time coming. It’s one that you can’t take lightly. What inspired me to do this is because I know there’s so few resources.”

Sharing Our Stories is a recent addition to TED’S weekly newspaper, where two stories are printed in both English and Kanien’kéha, to be used as a teaching tool for generations to come. These stories are cultural, historical, even personal, but they all convey important messages about the land, language, and people, and the stories that weave them all together inseparably.

For this project, community members have shared their stories about life before the St. Lawrence Seaway and its impact on the community when it was built in 1959. Others spoke of the education in town and its return to the hands of the community in the 1970s and 1980s. Those involved spoke of the formation of Ganienkeh in the 1970s, and some spoke of their experiences at residential and Indian day school.

The page that launched the project shared the stories of Joe McGregor, who described his approach to traditional medicines and honing the power it gives you, having worked with the medicines his entire life.

“(The McGregors) were farmers at one point, and they worked hard. When you hear them talk about it, it just brings back all the memories that we’ve lost,” Mayo-Standup said.

Others shared stories about the medicines, how they’re prepared and what they’re used for. Cumulatively, they convey explanations, solutions, and instructions for Indigenous wellbeing, sovereignty, and responsibility.

In every story, speakers artfully weave Tsi Niionkwarihò:ten, our ways.

What is TED’s role in this project?

Here at the paper, we work with participants to write their stories. Once stories are written and fact-checked, we return them to the storyteller for their input. Then, stories are handed over to our team of translators who do the work of understanding and interpreting the stories in order to create useful, authentic translations.

These stories are then paired with archival materials, photos, and maps in order to ensure they are resilient to any changes in land and law down the line.

“A lot of our history, as you know, a lot of it is based on oral history,” Mayo-Standup explained. “And the pictures testify what your story is, in what you’re trying to tell.”

At the core of this project are the translators who share in the responsibility. This work often leads to unearthing old words and using them properly, so as to balance the traditional language with the new ways of speaking Kanien’kéha.

“Not only does (Sharing Our Stories) teach you the word, it also teaches you the context in which it is used in an actual sentence. So you’re able to understand where else you may be able to use that word,” explained Sahawisó:ko’ Arquette, the main translator for the project. “The context is very important because a word can change meaning in different contexts.

It takes a different set of skills to create authentic transitions to Kanien’kéha. “There’s a lot of work that goes into it,” Sahawisó:ko’ said. “I think interpreting is one of the biggest parts to make it sound right in Kanien’kéha, and make it sound like a first-language speaker.”

Sahawisó:ko’ wasn’t always highly proficient. His father, Peter Arquette, is a first-language speaker from Akwesasne, and he used the language at home, so the kids were always familiar with it.

It wasn’t until Sahawisó:ko’ dedicated his focus to the language as a teenager that he became a strong speaker.

His mother, Queenie Arquette, couldn’t be prouder of her son. Having learned Kanien’kéha as a child, and then losing it once she entered high school, Queenie spoke of her son’s work as a strong wind to carry the language further, as she too learns from the stories he translates.

“It feels like he’s a rock star,” Queenie laughed. “A kingpin of Mohawk language. We’re so proud of him because my husband, he’s always teaching these two boys something. He says, ‘One day, my dream is for one of you to grow up, be fluent, and maybe teach.’ And then, check it out, Sahawisó:ko’. He’s teaching (his) third year now!”

Queenie recalled the impact that outside education had on her when she was growing up.

“I used to speak a long time ago, when we were children. Then we had to go to school, and you have to forget about everything,” she said. “In the 70s, when I went to school (in Chateauguay), it was all English.”

These experiences are compounded by Quebec’s recent French language laws that enforce French as the sole official language of Quebec, complicating public services and employment opportunities for English-speaking communities.

It’s clear now more than ever that Kanien’kéha is a resilient language that needs the support of Kahnawake’s neighbours to further enhance and secure existing efforts to promote and protect it for the next seven generations.

When Chateauguay resident Rich Leduc heard of TED’s language project, he was compelled to lend his support. After he won Habs’ tickets as a result of his donation, he couldn’t help but donate again.

“I think it’s fantastic. Honestly, I applaud it,” he said. “It’s a worthy cause I find, and any way that I can help our neighbouring community. I consider us good neighbours. Good neighbours support each other in every aspect.”

Leduc, a French-Canadian, felt strongly about supporting this project in light of the political climate and the resulting pressure put on Indigenous communities.

“Everything that’s going on with the French language and the laws and this and that – I find it embarrassing,” he said. “I have no qualms with any community wanting to maintain their language and their culture. I think the way Kahnawake is doing it is a lot more… inclusive.”

Support for the project started at home. The Kahnawake Business Contribution Foundation (KBCF) understood the project’s potential in the early days, and provided seed money to help the replanting effort.

“By knowing our stories and our languages, it gives us that sense of identity, of community,” said Kyle Delisle, KBCF president and executive director. “This is our language, these are our stories. That’s central, especially for the youth.”

However, the work isn’t over yet.

“It’s an uphill battle,” Bonspiel explained. “I always knew it would cost quite a bit.”

The goal is to make a free and accessible resource for those who want to learn the language, and the cost to keep it public is a major factor.

“For me, it’s also a personal thing,” said Bonspiel. “We’re trying to pass down as much Kanien’kéha to our son and our daughter.”

This effort to replant the language in the children spans many years throughout families in town.

“When I was three years old and we were at Tóta’s,” Queenie said, “my great-grandfather was sitting there, and he was telling us about the land. You know? You always nurture and take care of the land. You only take what you need off it. And you put back.

“It’s the same thing with the language,” she said. “Be grateful that you can learn a language that nobody else knows.”

Wee’git is back and ready to serve some grub

School’s out, and so the fight continues