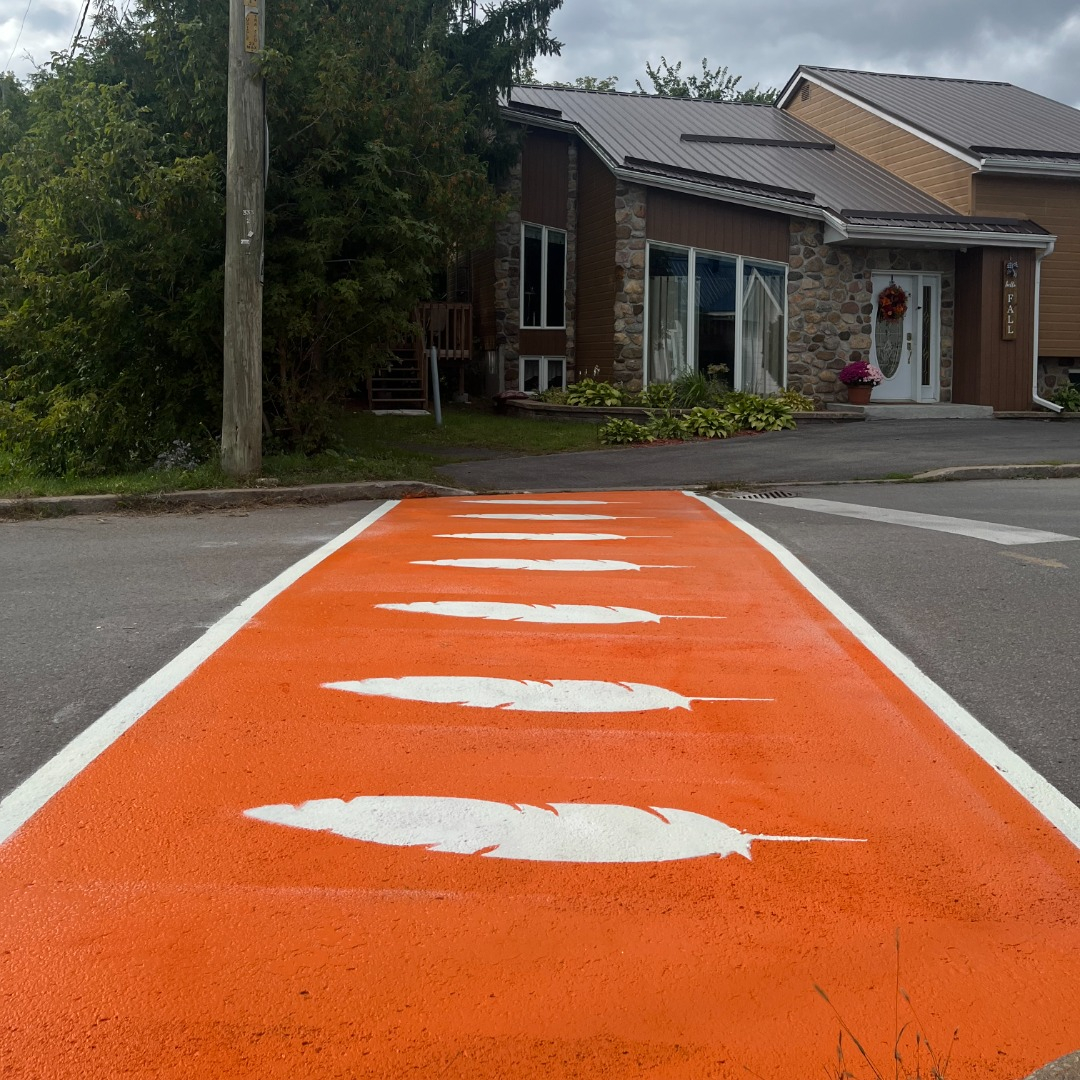 In 2013, medical transport worker Helen Jarvis Montour asked her boss if she could wear an orange shirt to work on September 30.

When he asked her why she told him about Orange Shirt Day, then in its first year. She had heard about it on Facebook. She explained how the day sought to honour and commemorate residential school survivors and the children who never made it home.

Her boss approved her request to forgo her uniform, but Jarvis Montour did not have an orange shirt in her wardrobe to wear – with one exception. She pulled out an orange Relay for Life caregiver shirt and turned it inside out. She wrote ‘Every Child Matters’ across the front with a Sharpie pen.

A lot has changed since then. Now everyone in Kahnawake knows about Orange Shirt Day, which has its origins in the story of residential school survivor Phyllis Jack Webstad of the Stswecem’c Xgat’tem First Nation.

Webstad, who is Shuswap, had gone to St. Joseph’s Mission Residential School with an orange shirt her grandmother bought for her. It was shiny, new, and bright. And it was promptly taken away.

“The colour orange has always reminded me of that and how my feelings didn’t matter, how no one cared and how I felt like I was worth nothing,” reads Webstad’s story on the Orange Shirt Day website. “All of us little children were crying, and no one cared.”

The day of commemoration that grew from this story is now a countrywide holiday named for truth and reconciliation, and it has been recognized by the Mohawk Council of Kahnawake (MCK) as a day of remembrance in the community, if still not in Quebec at large.

“I’m glad the initiative is being taken by the community, and I’m glad to be a part of it,” said Diome-Montour.

“As a designer, I just wanted to do my part by helping to not only create a platform to foster discussion and to commemorate those that never returned,” he said, “but as a show of community support with those that are still living with those wounds today in the form of both direct and intergenerational trauma.”

Orange Shirt Day has been marked in Kahnawake since when Jarvis Montour approached Curran Jacobs and June Skye-Stacey with the idea to launch a community event.

It will take place this year, as usual, at the green space between the Golden Age Club and Orville Standup Memorial Park. Community members are encouraged to arrive at this year’s event prior to 9 a.m., in time for a tobacco burning.

According to Jarvis Montour, the organizers’ intention has always been to promote positive thoughts and energies.

This is why when she heard of a band out west that frames their annual observance as a birthday for survivors – whose birthdays were never acknowledged at residential schools – she wanted to integrate it into last year’s event.

The concept continues this year, this time accompanied by the theme of tradition.

In addition to cake and other treats, the survivors will receive gifts; exactly what that will entail is to remain a surprise. Last year, survivors were given teddy bears, which Jarvis Montour said were chosen because she was told there had been one teddy bear shared among all the girls. “It was awesome. They were so happy they cried,” she said.

Jarvis Montour has personal as well as community-minded motivations for co-organizing the event each year.

“My father was a residential school survivor,” she said. “It’s hard for me to talk about it. But it’s because of my dad. I wanted to do something for our community and to have it in honour of him and the ones that never made it home. He made it home but there are others that didn’t.”

Curran Jacobs, in contrast, is primarily motivated by her awareness of intergenerational trauma, she said. “I feel like it’s something that’s really important for our community to be able to spend time together doing,” she said.

While Kahnawake has been wrestling with the legacy of residential schools for many years, the issue has received more attention across the country since the horrific discovery of 215 unmarked burials of children at the former Kamloops Indian Residential School in 2021.

“When those graves were found, it was a real eye-opener for a lot of people. I’ll be honest – I say this all the time – I was frustrated because we have been talking about this for a long time,” said Jacobs.

While the country at large finally awakens to the unthinkable trauma inflicted on Indigenous children in the residential school system, Jacobs believes the moment is right in Kahnawake to refocus on healing.

“I hope that many people from our community come out, especially some of our younger people, because as we continue to celebrate that we have survivors and people who have come out of this, it’s important for us to look to those young people because they’re the future,” said Jacobs.

“They’re the ones that are going to bring back our culture and our language, so they’re equally important as we’re in this in-between phase of moving on from this really terrible history.”

MCK chiefs will also be in attendance, including chief Ryan Montour.

“It’s important to demonstrate our resilience, how much our people have been through and persevered through this attempted genocide of our people,” Montour said.

“The Canadian government spent billions trying to take the identity out of our Indigenous population. We will hold them accountable to spend the resources needed to promote our identity, language and culture back into us.”

Those looking for an active way to acknowledge Orange Shirt Day in Kahnawake can join The Runners for a five-KM run or walk starting from the Cenotaph at 9 a.m. Participants are encouraged to donate to the Iakwahwatsiratátie Language Nest.

MCK grand chief Kahsennenhawe Sky-Deer will be at the Every Child Matters event in Montreal, hosted by the Native Women’s Shelter and Resilience Montreal. It begins at 1 p.m. near the Sir George-Etienne Cartier monument at Mount Royal Park.

Massage therapy to welding, Lahache does it all