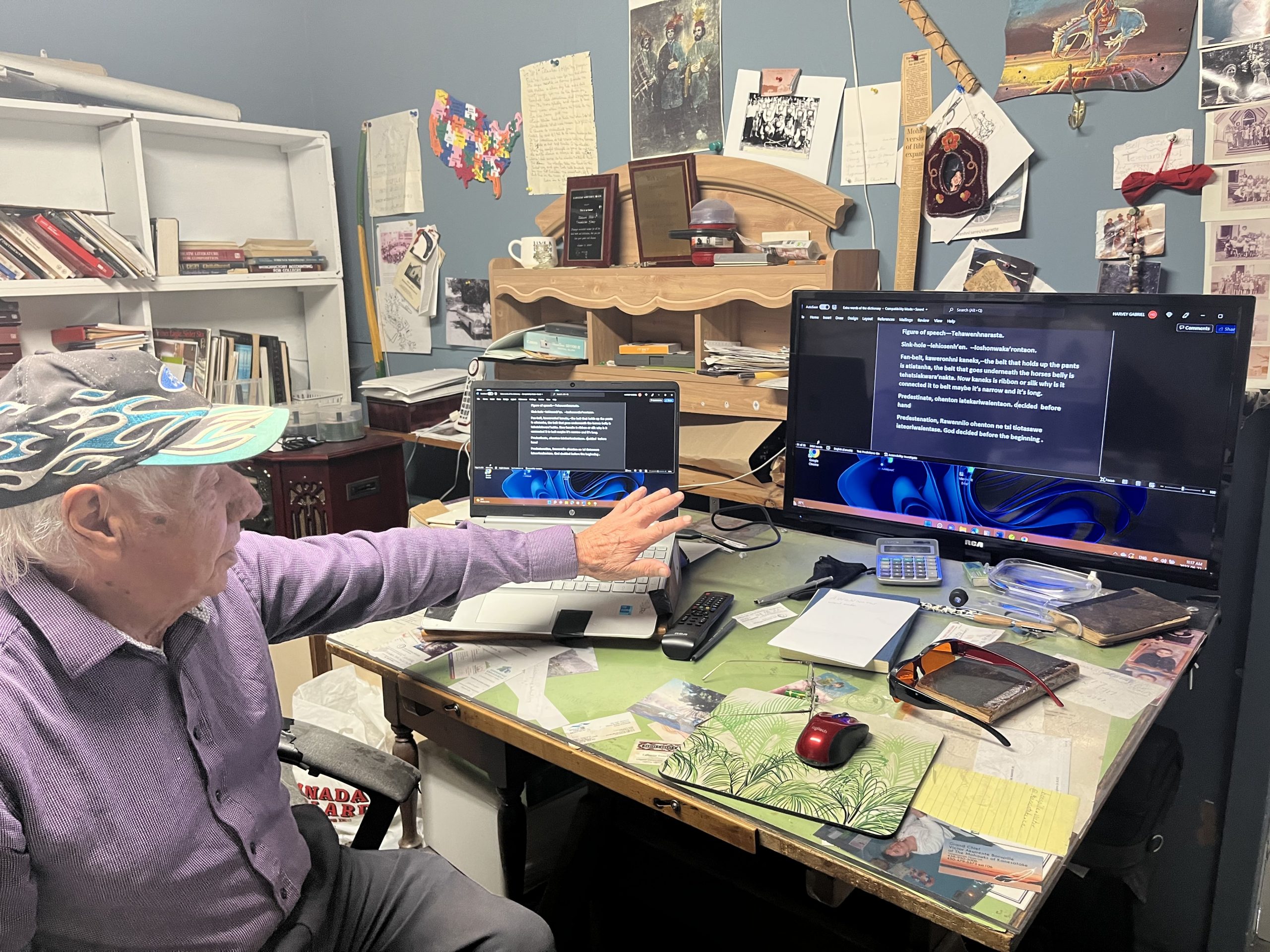 It took Harvey Satewas Gabriel anywhere from 15 to 17 years to translate the entire Bible from English to Mohawk.

“I don’t think anybody just comes along and says, ‘I’m going to translate the Bible.’ I don’t think that is how it is done,” said the elder during a conversation with The Eastern Door on a sunny Wednesday morning from his home in Kanesatake.

“I think God will test you like he tested me in 1957. He took me to church to listen to our own John Angus reading Mohawk. And that is where I got and adopted that interest.”

Gabriel was only 17 when he heard Angus, an ordained minister of the United Church. He was astonished when he heard him translate the scripture to the language as he preached God’s word. It was a defining moment for the young Kanehsata’kehró:non.

“I was sitting there listening, and I wondered if I would ever be that smart to translate God’s word into my language. That was the first time I ever heard Mohawk being read,” he said.

It’s an exciting time for the 83-year-old as he awaits with anticipation the unveiling of his Mohawk Bible at the church on September 9, 2023. He said that he hopes the celebration will be great and already has a long list of people he wants to invite.

He recounted how his mother would not allow any other language to be spoken in the house except for Mohawk. Gabriel explained that this life-long project is his way of preserving his language for generations to come.

“I used a lot of my mother’s words in my translation and some of the elders I listened to. I don’t really think it was my idea to translate the Bible,” said Gabriel. “If you read the Bible, God calls on people to do his work. I am a very simple man, and I don’t want to say God called me. That is a high calling, and I don’t know.”

In 1954, Gabriel joined the United Church because his parents and family also belonged to the denomination.

He said that the church has always been supportive of his community, going back to the 1800s when John Norton translated the Gospel of John in 1804.

“Then my great-grandfather (Sosé Onasakenrat) translated the four Gospels – Matthew, John, Luke and Mark. He also translated a hymn book which I have, and we still use 13 of his translations of the hymns,” said the elder.

“We are going to use two of those hymns in the dedication of the Bible in 2023. The cover of the Bible will be of the three clans of the Mohawks.”

In the early 1960s, his uncle Jim Montour started to read gospel scriptures at the church, but after a couple of years, he left and joined the Pentecostal Church. So for many years afterwards, no one read Mohawk in the church.

That is until 1980, when a new minister, Frank Gilmour, arrived.

“The first Sunday he preached, he asked if anybody knew how to read Mohawk. And everybody pointed at me, but I was not a good reader at the time. He told me that the following Sunday, he would give me the scripture to read.”

So, Gabriel scrambled to find a Bible since he did not have one at home and started translating the section the minister asked him to read. It took him a few days to translate eight verses. After the service, a few of the elders congratulated Gabriel and asked him if he would read again.

He also continued to read the scripture until the pandemic hit two years ago, making him the longest scripture reader in the denomination – 40 years, every Sunday without fail.

In 1990, a committee including Doris Montour, Josie Horn, and Charlotte Bush Provencher was formed to translate the Second Corinthians. The trio, along with Gabriel, would meet once a month to work on the translation. He said they had fun working together.

“I liked doing it. It is very pleasant and very nice to translate the word of God. And then to know the meaning of those Bible verses in my language,” said the elder.

Subsequently, he continued with the Book of Job, which he called his favourite in the Bible.

“The whole community belonged to the United Church at one time. And then they started leaving and what happened in 1990 – we lost a lot of members. They went traditional,” said Gabriel. “They blamed the church, but the church had nothing to do with that. It was the mayor of Oka that created the turmoil in our community.”

Throughout the 90s, Gabriel continued to translate the Bible, verse by verse and section by section. But at one point, he became frustrated because his work was piling up on a shelf and in his words “going nowhere.”

The society agreed to fund the project and provided him with assistance by sending biblical scholars to verify the translation’s accuracy.

He started working with the first professor in the early 2000s. It took the elder a whole year to translate Genesis, and then he spent another year checking the translation with the scholar.

However, the funding eventually dried up in 2011, and he was yet again on his own. But he was dedicated and continued to work on the translation until he finished the scripture in 2019.

That same year, a new minister joined the church and asked Gabriel why Kanesatake didn’t have a completed version of the Mohawk Bible. He encouraged him to carry on with his project.

Therefore, his wife, Susan, who is non-Indigenous, applied for a grant through the United Church of Canada Foundation with the hope of finally completing and printing the Mohawk Bible.

Since the beginning of this journey, Susan has been steadfast in her support of Gabriel. They have been married for 55 years and have four kids together: Diane, Christine, Cheryl and Travis.

“I was exposed to Mohawk when I was very young from his mother before she passed away. I have always been interested. One thing that she said to me was that if I married her son that I was to raise them (the children) with as much Mohawk as I could,” she said.

“That they could get the white languages from television and books and the world around them. She said that Mohawk was being lost, and I needed to enhance that. So, I did. I learned whatever I could. And I taught my children during the day whatever I could.”

Although she can understand a lot of the words and can also read Mohawk, she cannot have a conversation or put sentences together, she said.

“I think I have encouraged him to do that and, whenever possible, support him in that role. When he was first asked to do some translation for the church, he did that. And then when the opportunity came around for him to translate Corinthians, I encouraged him on that too,” she said.

Gabriel was eventually contacted by Royal Orr, a board member at the foundation and chair of the Joint Grants Committee, who told him that they had been so impressed by the project that the grant application had been pushed through.

The elder then called the Canadian Bible Society because he needed another scholar to finish verifying his translation. Doctor Jeff Green, a Bible translation consultant and senior manager of the Scripture Translation Department at the organization, began working with Gabriel once a week.

“This has been a long time coming. His family has been involved with this literally for generations now. And so, for the foundation to be able to support and encourage his completion in any way was a real privilege and an exciting project for us,” said Orr.

Susan called this enormous achievement overwhelming and said that from the point of view of language, every word that anybody could ever need in this life is in this Bible. She added that regardless of creed or background, the Mohawk Bible can be used as a learning tool.

“The legacy for him and the children is amazing. And what is also amazing is that it was done without a Theology degree. It was done with an understanding of grounding in your culture and language and roots, and thank God for his mother,” she said.

“We finished checking sometime in early May 2022. So now we have to do a lot of proofreading. And Jeff is just waiting to press that print button,” said Gabriel with a chuckle.

What it means to be a female vet from town

Blast from the Past: From battle to liberation to victory to memories

Landback Powwow is a go