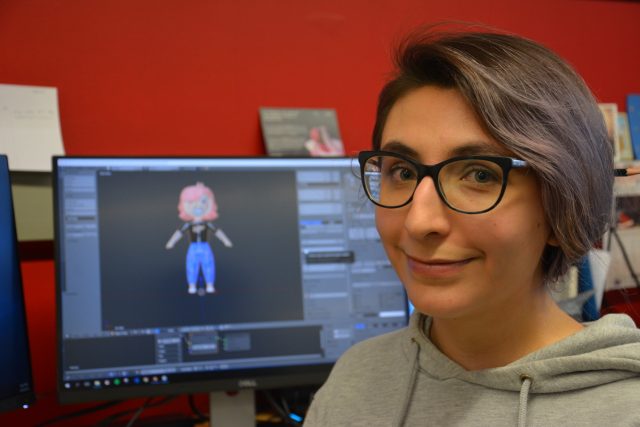 Kahentawaks Tiewishaw-Poirier is the recent recipient of the Milieux Undergraduate Fellowship, and will work on a project to bring artistic technology with an Indigenous perspective to the modern mobile world. (Daniel J. Rowe, The Eastern Door)

Kahentawaks Tiewishaw-Poirier has a passion for her culture and language, but also for how technology can help revitalize Kanien’kéha in Kanesatake and elsewhere.

The Kahnawake Survival School graduate is in the third year of four as a computation arts student at Concordia University working out of the Aboriginal Territories in Cyberspace (AbTeC) office.

She will work over the next year on a student-driven research project after being awarded the 2018-19 Milieux Undergradute Fellowship.

“The project I’m thinking of is picking a certain legend or story and turning that into a mobile game that children can play and interact with, in both English and Kanien’kéha,” said Tieweishaw.

“The research is going to be about how Indigenous communities can better use technology to try at revitalize culture and language.”

AbTec co-founder and co-director Jason Lewis nominated Tieweishaw after he saw her ability as a researcher to self-start and dive into projects on her own and with teams.

“She has been doing very good work for us in the research studio,” said Lewis.

Lewis said there is a push at the school to open research opportunities for undergraduate students, and not just those in graduate school.

“Part of what we’re trying to change for a number of different reasons, and not just in the Indigenous context, is supporting undergraduates to expose them to what research is, teach them how to conduct research and help inspire them to find an area that they want to get engaged in,” said Lewis.

Lewis learned the value of research as an undergraduate when a professor suggested a similar opportunity, and hopes more Indigenous students will be exposed to the value of doing research.

“It’s particularly important in the Indigenous context because we don’t have a lot of Indigenous students in grad school in general, and one of the best ways to try to address that is to try to find an undergraduate students and work with them, mentor them, and find them the support so that they can understand what research is and maybe decide for themselves if they want to go and work in that level,” said Lewis.

The daughter of Frank Tiewishaw and Donna Bonspille has been involved in AbTeC’s Skins workshops, and recently went to the Aboriginal Storytelling and Video Game Design workshop in Honolulu that profiled a game using both the Indigenous Hawaiian language and English. It is a concept she would like to bring to her language.

Her goal is to branch beyond traditional ways of teaching language by embracing technology.

“It’s hard to get out of a certain nutshell when you’re used to going about revitalizing and preservation in a certain way,” said Tieweishaw.

“You’re so focused on being consistent and doing the things the way you have been doing that you’re too busy trying to do that that you can’t think of doing anything new. I thought it would be neat to find a different way.”

Tieweishaw was in immersion for elementary school, and on her way to being fluent in Kanien’kéha, but lost her language in high school and beyond. One reason she cites is not having Kanien’kéha in the media she was consuming in her teenage years.

“I’ve been to a lot of introduction to Kanien’kéha classes, and it’s a lot of the same thing, so it’s hard to take it to the next level and incorporate it at home,” she said.

“It’s one thing to learn it in a class or be immersed in it at school, but if you don’t have anything really solid to interact with at home then your retention isn’t going to be there. I want to make the tools that I wish I had when I was in immersion growing up.”

Children now use tablets, phones and other technology at very young ages, and having Kanien’kéha content within the tech world is a major motivator for Tieweishaw in her research.

“It’s important to get in there when you’re in that stage of absorption,” said Tieweishaw. “With all the stuff that people are using with iPads now, I think it’s important for Indigenous people to get the content out there that kids can interact with.”

She has been involved with AbTeC since 2008 when she took part in the first Skins workshop, while at school at KSS. Having the centre has meant a great deal to the 25-year-old.

“That’s when I first discovered this new world of thinking that I could actually contribute to the media I was consuming,” she said.

“I could go out there and make the kind of things that I wanted to see. It was really a big changing point in my life. I don’t think I would have gotten this far if it hadn’t have been for them running into me and showing me all of this stuff.”