Skip to content
You are here
Home > Education > Indigenizing a campus, inspiring a city 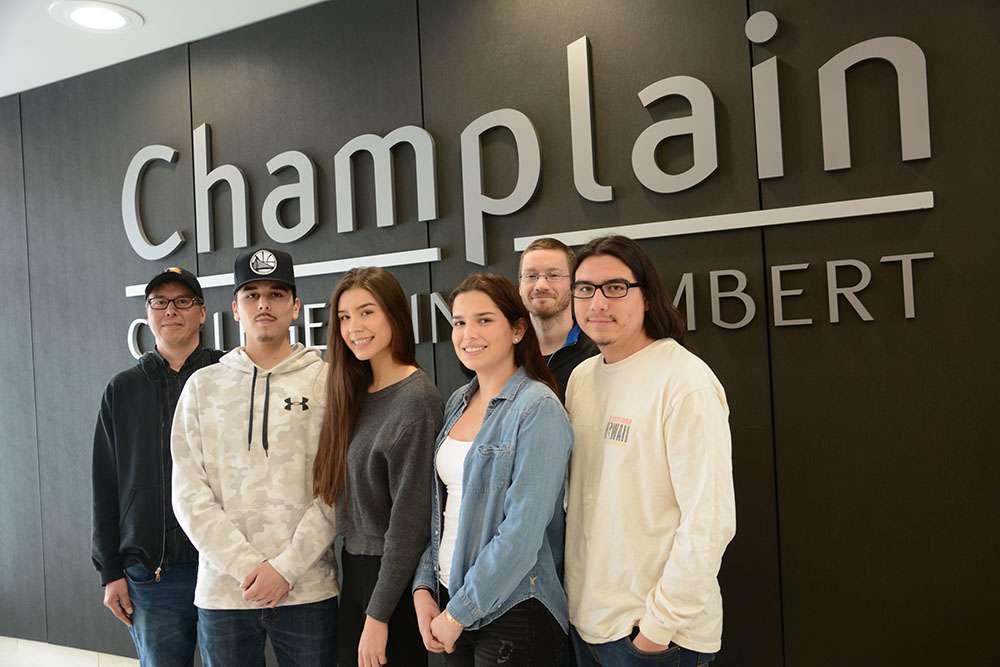 From left to right Tanu Lusignan, Kale Phillips, Jennifer Paul, Belle Phillips, David Pearson and Tahothoratie Cross have started something at Champlain College in St. Lambert that is inspiring Anglo CEGEPs across Montreal to emulate, in efforts to indigenize their campuses. (Daniel J. Rowe, The Eastern Door)

Tahothoratie Cross started Champlain College, St. Lambert’s entrepreneurship program in the fall of 2016. He was the only student from Kahnawake to start that year, and aside from Wednesdays when he had lunch with Jennifer Paul and her boyfriend Kale Phillips (in the same program, but a year advanced), Cross spent his breaks in his car, freezing or boiling with the season, and the rest of his days at school quite lonely.

“It was a hard transition and especially going into a class of 40 at the time and everyone else spoke French, so it was just me sitting there all alone waving to people,” said Cross.

Student services officer Dave Persons spotted Cross one day wearing a Boston Bruins jersey and started up a conversation, and heard about his lunch breaks alone in his car.

“It hit me right in the heart,” said Persons. “Essentially that’s my job is that everyone feels that they belong and they have a community here.”

He acted immediately and sent out a call to the six students at Champlain from Kahnawake looking to set up an Indigenous student group, and found a more-than-eager immediate response from Phillips and Paul.

“We were so excited,” said Paul, who replied with some ideas. “We were reading the message and I was like, ‘oh my God. This is what I’ve been waiting for since I first started my first semester here. I was waiting for some kind of support here for Indigenous students to help us transition, to just be a part of student life at Champlain and not just let us be and disappear into the crowd.”

The program has already inspired an intercollegiate college committee across the five English CEGEPs in the region for faculty that meet to implement Indigenous perspectives.

“If it weren’t for them and their ideas, that group wouldn’t have been formed,” said Persons.

The relatively small Champlain campus (around 3,000 students) does not typically have a huge contingent of Kahnawake students, but that is likely to change with over 20 applying for next year thanks in large part to the work of the ambassadors going to KSS and promoting the school.

“They are the reason it’s changing,” said Pearsons.

Tanu Lusignan works for the First Nations Regional Adult Education Council in Kahnawake and Champlain, and approached Lusignan in the summer for guidance in how exactly to indigenize the campus. After learning about the school, its staff, services and students, Lusignan and the FNRAEC decided to target the students and develop a grassroots group to lead the initiative.

“We know there’s a movement across Canada, and it’s especially new in Quebec of developing curriculum, indigenizing education and also even recognizing whose territory you’re on,” said Lusignan, who is Haida Gwaii. “We’re going to work from the grassroots up to the upper management where we can effectively make change in policy.”

Belle Phillips spoke about what acknowledging the territory Champlain’s St. Lambert campus is on would mean.

“This would open up to a discussion of Indigenous peoples’ issues and things that happen, the true version of history such as residential schools, the Oka Crisis, and even go back to first contact,” she said.

“The trend right now is reconciliation, so in order to do that they must understand first and realize what our people have been through and also what we still deal with.”

FNRAEC teacher Tiio Hemlock gave a history of Montreal presentation from the Kanien’kéha perspective, and Paul spoke about a day in the life of an Indigenous student.

“It was a real eye-opener to all faculty,” said Lusignan. “You’re learning even from faculty that they didn’t know who the Mohawks were.”

Over the past year, Paul and Kale Phillips have also visited Survival School to help students understand the college experience, and the benefits of the school.

The college is about a 20-30 minute drive with no bridges against traffic, and is walking distance from a metro stop.

The small student body is also a huge advantage for local students used to a tight knit community.

“We’re so used to knowing everybody in our community, and being so tightknit and acting as a family, and that’s the same exact feeling I get from being at Champlain,” said Paul.

“Even though they’re not from Kahnawake, and they’re all non-Indigenous, I still get that feeling of being in a place where I belong, and I know that’s one of the biggest issues for new students going into CEGEP. They don’t know where they belong and they don’t have any type of resources, support or friends.”

Belle Phillips had a tough introduction to CEGEP at John Abbott, and knows her work as an ambassador will help future students avoid what she went through.

“I got really bad culture shock from it and suffering from depression,” said Belle, who had trouble making friends or understanding her French-speaking classmates. “I just wanted to drop out.”

After reaching out to Petal McComber at KSS, Belle decided to join her brother, Paul and Cross at Champlain, and is now working with Tahothoratie on developing a database of contacts for CEGEPS in Quebec and Onkwehón:we communities.

“Once I got here, I found it so much more helpful,” said Belle. “I found it a lot easier to make friends here.”

As ambassadors, the four students have laid the groundwork for future students who will enter CEGEP and likely experience some of the same culture shock they did.

“The first couple of weeks were so scary,” said Paul. “I did not know anyone. The only person I had was Kale.”

“The language barrier was such a big issue that when we had to explain that we didn’t speak French or understand French, the other students were like, ‘well what’s wrong with you? You live in Quebec,’ and you have to explain that we come from Kahnawake, a small Mohawk community, and French is our third language,” said Paul. “There was a huge culture shock.”

Kale had an easier time making friends in his English class, and helped his girlfriend meet people and network.

“Then I introduced them to Jenny and that’s how she kind of came out of her shell a little bit, but the culture shock was pretty hard at first because of the French, and we didn’t know anybody,” said Kale. “It was like going to kindergarten again.”

The couple decided to stick it out, knowing the importance of school.

“We needed to be here,” said Paul. “There was absolutely no way that we weren’t going to get an education.”

As tough as it was, Paul and Cross were adamant that students have the ability to go straight from KSS or any high school to CEGEP.

“I’m so happy that we came to Champlain and went right into the entrepreneurship program,” said Jennifer. “I’m so proud that we did it, and I don’t see myself doing anything else… I think everybody coming out of KSS and all other high schools are all capable of succeeding in CEGEP right off the bat.”

“I think everybody has the potential, they just have to be pushed and you’ve gotta have the drive to get it done,” said Cross.

Paul said teachers drop by the room the ambassadors procured and ask how they’re doing on a regular basis, and students from different programs often seek advice and opinions from the group’s Kahnawake perspective.

“The response from the entire school so far has been extremely supportive,” she added.

The hope is that the ambassador program will only grow from its humble roots.

“The work that they’re doing is rewarding,” said Lusignan. “We’re already looking forward to next year and having the new group of mentors mentor the next group coming in, and expanding out to the other colleges and universities.”

Indigenous issues on the docket at Kairos meeting

Eagle Spirit Camp a lesson for youth and leaders