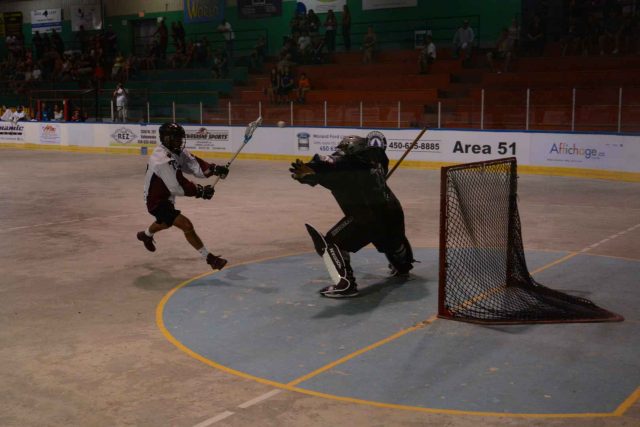 Brine Rice, seen here playing with the Kahnawake Junior B Hunters, heard his name by his favourite team at the NLL draft, and now plans to “work his butt off” to make the team. (Daniel J. Rowe, The Eastern Door)

The 20-year-old transition player told The Eastern Door earlier this year that he thought he would be up for next year’s draft, while playing Junior A lacrosse with the New Westminster Salmonbellies in BC, and the NCJAA All-American was still rattled the morning after, hearing he would have a chance to play with the four-time Champion’s Cup winning team.

“Honestly, I wasn’t expecting to be in the draft. That’s why I went to the combine to showcase what I had and hope for the best.”

Rochester also won a North American Cup in 1997 before it became the Champion’s Cup.

Being chosen by one of the NLL’s most storied franchises was a dream come true for the leftie, who will join the ranks of prior Iroquois Nationals greats, who have worn the blue and grey.

Rice played his past two years at Onondaga Community College where he was named an All-American.

“It felt great considering what they’ve done in the past and all the players from OCC there,” said Rice. “It’s the team I always grew up watching, so I know a lot of players on their team.”

The Knighthawks had an off-year last season, finishing fourth in the East Division and out of the playoffs for the first time in years.

Rochester’s runners and goalies were forced to watch the Saskatchewan Rush become the new dynasty in the league last season, after winning its second straight title. The Knighthawks won the previous three.

Far from being nervous about joining the team, Rice is ready to contribute right away.

“There’s a bit of pressure, but that’s not something I’m going to be afraid of,” said Rice. “I’m just going to have to work hard and do great out there.”

Rice will be at the Knighthawks’ first tryout camp October 22 in the hopes of being called back to the main camp in November. Though young, Rice intends to put everything on the floor to make his favourite team.

“It depends how hard I work,” said Rice. “I obviously want to make it so bad, so I’m going to be working my butt off to make the team. I’d say I have a good chance. I bring a bunch of speed, and it’s going to help them with the transition game.”

Rochester used five of six picks on offence that will join the likes of National Cody Jamieson and Team Canada captain Dan Dawson on the team’s front lines.

Rochester traded transition staple Brad Self to the Buffalo Bandits for picks, leaving a hole that Rice hopes he can fill.

“Hopefully, I can pick up his role and do better and help the team out as best I can,” said Rice.

Haudenosaunee players were drafted up and down the board, with Seth Oakes picked by the New England Black Wolves, Vaughn Harris by the Calgary Roughnecks, Doug Jamieson, also by the Black Wolves, Warren and Brayden Hill by the Georgia Swarm, and Danton Miller by the Vancouver Stealth.

Brine’s father Jake Rice was predictably excited to see his son join the pros, and join Peter Paul, Logan Kane and Angus Goodleaf from Kahnawake in the NLL ranks.

“I’m real proud of him, and told him to keep working hard and don’t give up on your dreams,” said Jake.

“You just don’t stop chasing it. You’ll be a role model and pass it on to our people.”

“I like the pick,” said Goodleaf. “I think management is trying to get a little younger and faster and I think Brine will fit in perfectly. (He’s) still gotta make the team though. I hope he makes it though. I think he could be a solid replacement for Brad on the back end.”