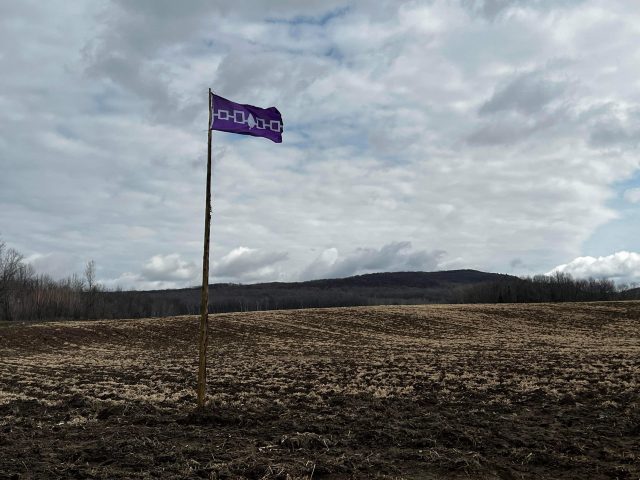 Lawyers representing the municipality of Oka have given formal notice to Al Harrington warning him to halt his efforts to evict Les Jardins Vegibec from the community.

“I know it’s part of this – mind games. For me, right now, we are going to still pursue this. My family is still behind me on this,” said Harrington.

However, as the situation escalates, Harrington telegraphed that he is counting on the community as well.

“I will continue if I’m supported by the ones that are standing behind me on this,” he said.

“I’m hoping that they will stand up when the time comes.”

Despite being situated by Little Tree Gas, the land occupied by Vegibec is considered part of Oka and is legally owned by its non-Indigenous president, Pascal Lecault, who bought it from a Kanesatake community member in 2015.

While Harrington has protested the industrial farming operation in the past, his delivery two weeks ago of a non-binding eviction notice has so far attracted the attention of TVA, the Surete du Quebec (SQ), the mayor of Oka, and now the municipality’s lawyers.

The letter, signed “The Land Defenders of Kanesatake,” claims title under the Great Law of Peace and outlines a lack of recognition of Oka’s jurisdiction over the land.

“Failure to abide by the eviction notice will result in Kanesatake community members taking all available action against use and significant disruption to all your commercial activity,” the eviction letter concludes.

This last sentence was seized upon by the Oka lawyers, who partially quoted it in their notice.

“Be advised that such actions not only constitute harassment and intimidation tactics, but directly contravene the rights to peaceful enjoyment and free disposal of this owner’s property,” the letter reads  before citing specific laws.

It goes on to advise Harrington that Oka is putting him on notice to immediately cease any related act.

Harrington suggested he can see how the cited language may not have been ideal. Nevertheless, he sees an irony in Oka accusing him of intimidation when the letter from Oka seems to seek to do the same.

“It kind of plays with my mind, that maybe I should rethink this, or do I really want to go to prison? It kind of puts it in my mind that this is the government, this is the system, and if I don’t comply with it, my fate will be either jail or sued,” he said.

An investigation by the SQ after Lecault reported Harrington for trespassing was still ongoing as of Wednesday, according to spokesperson Marc Tessier.

Harrington and his partner, Karonhienhawe Nicole Nicholas, don’t see how it could be considered trespassing if Harrington delivers a letter, considering the Oka letter in response to his action was delivered to their home just as the original letter was delivered to Vegibec.

“He did nothing wrong but just give a piece of paper in the door,” Nicholas said. “But they’re going to turn it around and make it illegal and say that he’s trespassing. Well, if the shoe fits, wear it. They’re trespassing as well.”

The letter was also delivered in French only, which Harrington does not speak, adding to the stress of the situation.

While Harrington is unfazed, he had no plans to escalate the situation over the winter, a time when the Vegibec farm lies dormant.

“It’s going to be a long winter. We don’t want to be out there,” said Harrington. “Come spring, like we said – for now we’re still holding our ground. And we will still pursue not letting Vegibec come in to do their gardens.”

Harrington is committed to the fight, he said, because he is motivated by the aim to protect the future of his children and generations of Kanehsata’kehró:non to come.

“The children here have no land. Everybody’s squabbling and fighting for land. This is still my focus and my reasoning for still fighting for it,” he said.

“Kanesatake has no land even for its members, even right now. They even have people living in the bushes here, trailers, or makeshift houses that they’re building.”

He also said it has fallen on ordinary community members to pick up the fight in part because it appears the Mohawk Council of Kanesatake (MCK) is unwilling to do so.

“They’re powerless. They don’t have a backbone,” he said.

MCK grand chief Victor Bonspille, who was CC’d in the letter from Oka to Harrington, did not respond to multiple requests for comment.

The formal notice from Oka closed by accusing Harrington of exacerbating tensions between Kanesatake and Oka, echoing comments from the mayor last week characterizing Harrington as unrepresentative of the community of Kanesatake.

“Al isn’t even from here, yet he cares enough to fight for the land whenever possible,” said an employee of the MCK who declined to be named, citing their job.

“It is unfortunate that there aren’t more men who stand up for the land. I don’t think it’s because they don’t care. It’s because they feel it’s Council’s battle. Council gets paid for that. The rest of us work full time. We go to work to put a roof over our heads,” they said.

Nicholas agrees with the stakes, adding her ire about the environmental degradation of an industrial farm on the land.

“If the father of my children wants to fight for my children and other children in this community in the future, or for future generations, then so be it,” she said.

Oka mayor Pascal Quevillon did not return a request for comment by deadline.