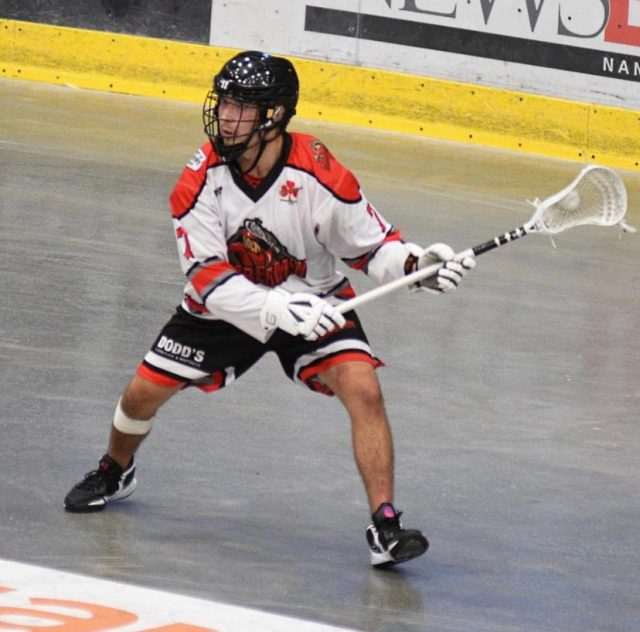 Teioshontathe McComber was four years old when he got his start in the Kahnawake Minor Lacrosse league. Tomorrow he will play his first game in the National Lacrosse League (NLL) for the Georgia Swarm.

McComber was drafted 48th overall back in September. Before that, he played for the University of Albany Great Danes and, of course, the Kahnawake Hunters.

McComber’s father, Kanerahtontie McComber, was instrumental in his son’s early start. Kyla Jacobs McComber, Teioshontathe’s mother, recalls these early years with fondness. “He wasn’t even old enough to be playing, but they needed a coach, so they told my husband that if he wanted to coach, our son could play in exhibition games and whatnot.”

Kanerahtontie remained his son’s coach for many years, fostering his talent and traveling all over North America to do so, but Jacobs McComber said her son was born with something special. “He already had that drive from when he was young – it wasn’t something he was forced to do – it’s just something he wanted. My husband just built on that.”

Teioshontathe is a left-handed offensive player. He’s quick, strong on his feet, and a proven goal-scorer. Last week, while watching him play in an exhibition game, his mother felt an air of certainty. “When I saw him on that floor I could feel that he was going to get noticed for his work ethic and his ability to move so quickly,” she said.

Sure enough, it was announced on Tuesday that Teioshontathe was on the roster for the Georgia Swarm’s first game of the season, against the Rochester Knighthawks. “I’m so very proud of him – our whole family is,” Jacobs McComber said.

Lacrosse is a family affair for the McCombers. Teioshontathe’s little brother, Teharonhiorens McComber, is also a lacrosse player, having played last season with the Onondaga Lazers. When asked who his biggest supporters are, Teioshontathe answered, “My family. My mother, my father, brother, sisters.”

But his biggest inspiration is his two-year-old daughter. “She was a big reason for my current success. Everything I do is 100 percent, and it’s for her,” said Teioshontathe.

Al Jones, a retired NLLer and friend of Kanerahtontie, has been following Teioshontathe’s career for years. He called Teioshontathe a success of the Kahnawake minor lacrosse system and is happy to see that when he’s not traveling up and down the continent, Teioshontathe is teaching physical education at a local school.

“As a minor coach, we try to develop these kids and get them to the highest level. It’s not just for them personally, but it’s also for the development of the community, because when they go and play high-level lacrosse, they bring it home,” said Jones.