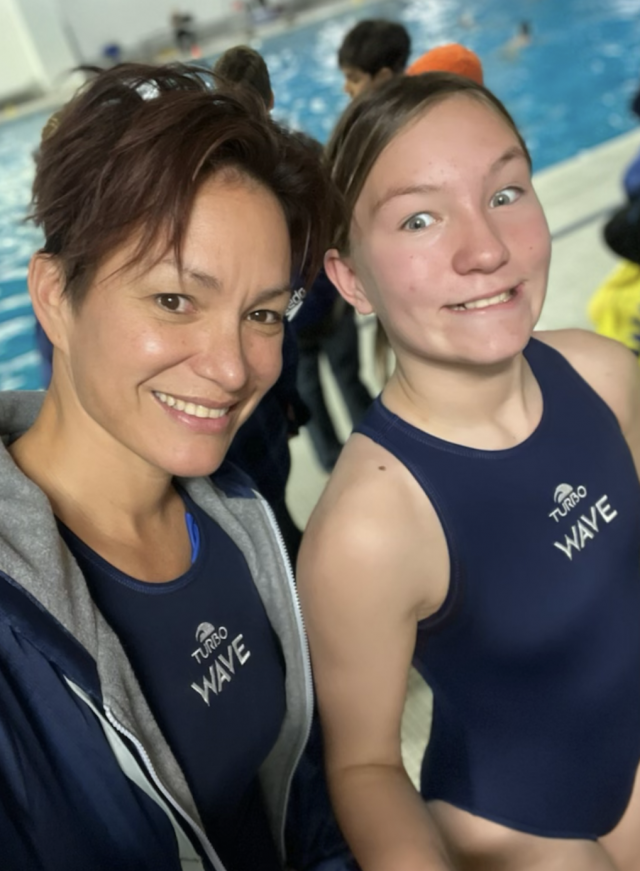 It’s got to be hard growing up as a Miller-Morgan.

Waneek Horn-Miller is a world-renowned water-polo player, the first Kanien’kehá:ka woman to represent Canada at the Olympic Games, co-captain of the Sydney 2000 Olympic team, and a member of Canada’s Sports Hall of Fame. Her husband and fellow olympian Keith Morgan is one of the biggest powerhouses in Canadian judo.

Now, their children are following in their footsteps.

“She wasn’t always interested in water polo, not until recently,” explained Horn-Miller. Her 12-year-old daughter, Skawennahawi Miller-Morgan, recently played alongside her mother in a game at Queen’s University.

“She kept saying, ‘I’m not you! I’m not becoming an Olympic athlete!’ but swimming is a life skill. I started to guest coach at our club, and she did a summer program, and she just fell in love with the sport.”

Horn-Miller said that though she’s always wanted her children to love her sport, she’s been careful not to pressure them to play.

“Wherever it takes her, that’s okay. The Olympics aren’t for everybody; elite sport is a very stressful world,” she explained. “It requires a certain type of dedication. If she finds water polo is a place where she finds confidence and happiness and stress relief, I’ll be very happy… I don’t want her to lose that love of sports, just to train really hard.”

The talent doesn’t stop with Skawennahawi. Horn-Miller’s son, Shonakarakehte, is also no stranger to the sport, winning gold in a local tournament last weekend. Though he’s only nine years old, he’s competing in the U11 division. His sister is also playing for an older age bracket, managing to make it onto the U15 team at only 12 years old, and also winning a silver medal last weekend.

The friendly match at Queen’s University this month was Horn-Miller’s first time playing as her daughter’s teammate – and she was impressed by her skills.
“She’s got a great head for tactics and where she’s meant to be. She’s taking shots – so many athletes won’t even take a shot because they’re afraid to miss,” said Horn-Miller.

It’s not just the love of the sport that Skawennahawi has inherited from her mother – it’s also the way she plays.

“You watch her in the water and she swims like me,” said Horn-Miller. “It’s so funny to see that.”
What makes Horn-Miller happiest about her children’s sporting achievements is the simple fact that they appreciate her being there.

“They love having me there,” she said. “It’s rewarding to be there, not just for my kids, but for the up-and-coming generation.”