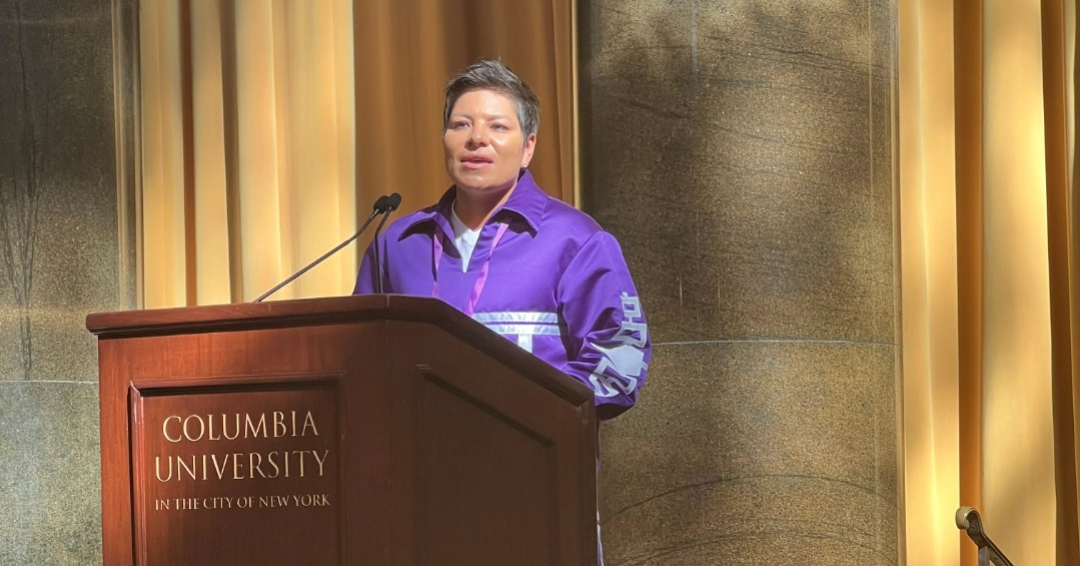 The grand chief also opened the event with a land acknowledgment.

“I was really honoured, first of all, to have been invited to an event; I think it was definitely emotional and uplifting to be around Indigenous people from all across Turtle Island,” said Sky-Deer.

October 10 was recognized nationally as Indigenous Peoples’ Day in the US after president Joe Biden signed a Presidential Proclamation.

Dylan Baca, a student at Columbia and chairman and chief executive officer of the Indigenous Peoples’ Initiative, said that it was important to mark the day with a major celebration and gathering.

“We invited all the tribal governments from the New York area. We invited the Seneca Nation. And then just understanding the ties to these lands, we invited grand chief Sky-Deer to be representative of what the previous history used to look like,” said Baca.

“And recognize that people that actually used to stand on the land in which New York is now currently situated in. We thought that it was really important to have her here as well.”

Previously, the US only recognized Columbus Day.

Sky-Deer called the day “historic” and said it was important for people to understand Indigenous history and presence that stretches back generations before Christopher Columbus arrived on this continent.

“Dylan and the young people that are a part of the Indigenous Peoples’ Initiative and everybody I met at the First Peoples House at Columbia University…I’m just inspired to see the up-and-coming youth, their perspective, their activism, their drive to reconnect with the culture, values, principles. The spirit of our ancestors is strong in them,” said the grand chief.

Additionally, she said that initiatives such as this one are necessary to bring awareness, understanding and education so Indigenous and non-Indigenous people come together and form better relationships and cooperation.

“We had the Picuris Pueblo tribal delegation that flew all the way from New Mexico to come see this event,” said Baca. “So, we had a lot of support from the outside. Initially, the event was started by (Columbia students) Kianna Pete and Hannah Jimenez. Those are the two leaders of the Native American Council for Columbia.”

The grand chief spoke about her excitement at seeing Columbia University anthropology professor Audra Simpson who is from Kahnawake, and Patricia Marroquin Norby, the first curator of Native American art at the Metropolitan Museum of Art in New York.

Baca said that it was crucial to highlight strong Indigenous women as part of the ceremony.

“At the crux of what we try to do at this initiative is make sure we’re inclusive of everyone and being able to represent everyone, but also set a precedent for making sure we created positive change for our generations,” he said.

Ms. Fran is saying goodbye after over 35 years