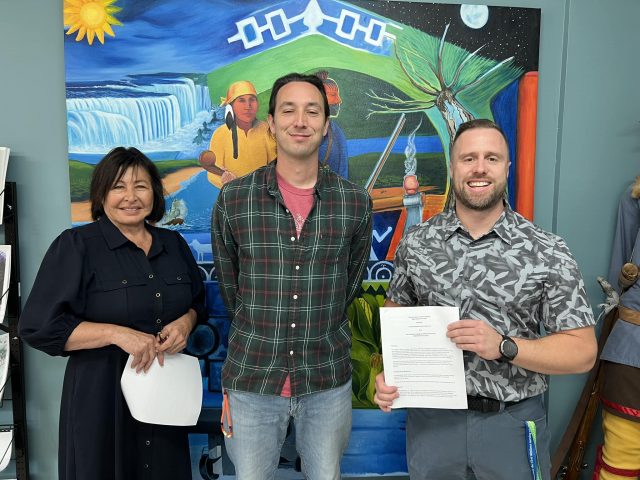 Last Wednesday, as she sat in class on her first day of school, Kanehsata’kehró:non Kahontokta Beauvais could not believe that she was finally going to start learning her ancestral language.

“Originally, I wanted to apply because I have a lot of strong speakers in my family. And growing up, I wasn’t able to learn my language because I (had) to transfer outside the community to a school off the reservation. I never got the opportunity to actually learn my language,” said Beauvais.

The mother of two has had a lifelong dream of speaking Kanien’kéha with her family, and in the past, she contemplated joining the Ratiwennenhá:wi language immersion program, but life just kept getting in the way.

“So, this time around, I talked to my family to see if I would be able to even accomplish this or even try to do this with having a baby as well,” she said.

“I have the greatest support system now. They told me to take my step forward and do what I had to do. So, I took the initiative to actually do it and start to learn.”

In addition to learning Kanien’kéha, Beauvais, along with 14 new students – the most the program has ever had – will be working towards obtaining a Certification in Education from the Office of First Nations and Inuit Education (OFNIE) at McGill University as part of a partnership between the Ratiwennenhá:wi program, the Kanesatake Health Center (KHC) and the university.

“I felt the accomplishment just even being in that classroom the first day. It brought positivity to me. I know I’m on the right path right now. My goal is to be able to teach in a school,” said Beauvais.

According to Dr. Stephen Peters, the assistant director of OFNIE at McGill, the 60-credit partnership program provides an opportunity for Kanehsata’kehró:non to become qualified teachers.

Moreover, graduates of the program will receive certification from the Ministry of Education and Higher Education to teach at the elementary school level in Indigenous schools. Subsequently, they will then have the opportunity to complete a bachelor’s degree.

“One of the big advances out of this program is that McGill is now recognizing and accrediting the in-community language education program. So that’s the real novelty of this partnership,” said Peters. “One thing that is important to note is that this partnership with Kanesatake has really helped us at McGill and in our programs, and often in particular advances and improves our own program in the way that we partner with communities.”

Dr. Peters added that the driving force behind the partnership was Teiawenniserate Jeremy Tomlinson, the executive director of KHC, and Hilda Nicholas, the director of Tsi Ronterihwanónhnha ne Kanien’kéha Language and Culture Center.

“I think there’s a movement happening, that the young people really wish to learn to speak their language,” said Nicholas, who has dedicated her life to revitalizing Kanien’kéha in the community.

“I am just looking forward to the end of the three years because we’re going to have that much more speakers. And they’ll be certified, and they can continue to go into their bachelor’s later on. It’s a very exciting time for us right now.”

Nicholas credits the partnership with KHC for fully supporting language revitalization and providing the Ratiwennenhá:wi program with additional resources that have sorely been missing since the beginning of its current iteration in 2016.

“This marriage with the health centre is very exciting for the community. The community sees that there’s another service that wants to do what we’re doing and working together. The more people in the community and more services in the community, enjoying the revitalization efforts, the more success we will get,” she said.

Tomlinson said that in addition to facilitating the partnership between the language program and McGill, KHC will also be providing Ratiwennenhá:wi with extra resources in the form of a current staff member who also happens to be the first graduate of the program, Wenhni’tiio Will Gareau.

“We had a wonderful resource here at the health centre that was helping us in language inclusion and cultural events and even in-house language instruction. Sending Wenhni’tiio, who could affect the most amount of people, was a no-brainer,” said Tomlinson.

KHC’s executive director said that he started his own language journey at Ratiwennenhá:wi in 2019.

“By investing and helping on that route, we’re also promoting community well-being through language revitalization.”

He added that KHC is committed to investing in language and culture for the long haul.

“We’re investing on the social side, on the prevention side, and even on the mental health side. By reclaiming our identity, our language, our culture, I believe it can fill a void that causes a lot of the issues that we see today on the health and social side,” he said.

Nicholas also said that another graduate, Tiorihwaié:ri Megan Harding, and current student Kevin Nelson, will also be assisting and teaching the language.

“It’s totally fantastic. It’s totally needed. The teachers are past retirement age, and they are in desperate need of teachers in Kanien’kéha, and we don’t have them,” said Nicholas about the new students who started the program.

“And at the end of the three years, I’m going to feel that I have done my job because other people will take over. It’s my reward. For all the years that I’ve dedicated to this and to see these numbers, I am just extremely proud of all of them.”

However, funding continues to be a big issue for immersion programs in Indigenous communities. Both Nicholas and Tomlinson believe that Kanesatake can’t stand idly by waiting for government funding and must continue to act.

“The Mohawk Council of Kanesatake is working on getting the proper funding that we need. And also, we are waiting for an answer from (the Department of) Canadian Heritage. But that’s not happened yet. The language committee is also planning on fundraising,” she explained.

As for Beauvais, she said she can’t wait to be further along in her language journey since her youngest, one-year-old Emerson Tehaweratá:ses Bonspille, learned Kanien’kéha before English, so there is currently a slight language barrier between them.

“I want them to know who they are, to know that they are Onkwehón:we and to be able to speak the language because it’s a beautiful language. It’s very des criptive,” said Beauvais.

“So, it will be something that they could carry on to their children and their grandchildren. I want to keep the language alive.”