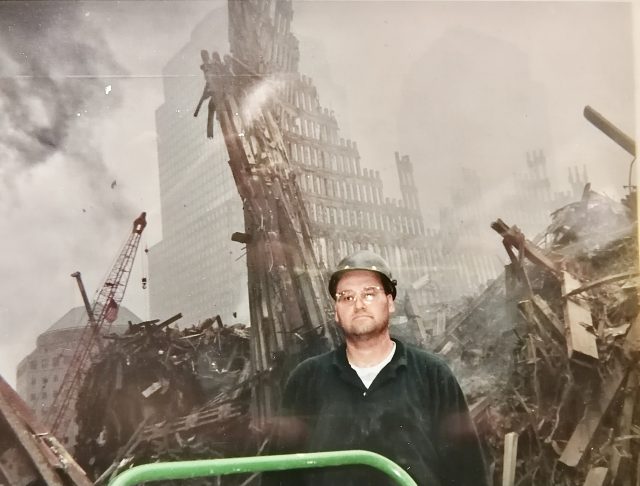 Days after September 11, 2001, Lindsay LeBorgne trudged through ground zero, toiling in the shadow of the Deutsche Bank Building.

Each time he heard a piece of glass fall, he ran. So did everyone else. “Everybody was jittery about that building collapsing,” LeBorgne said. The South Tower of the World Trade Center had ripped a gash in the glassy black Deutsche building on its way down.

LeBorgne spotted a fire chief, recognizable by his white helmet and the blueprints he carried to help guide the search and rescue operation.

“I asked him, ‘is this thing safe, this building?’” recalled LeBorgne. “And his answer to me was, ‘There’s nothing here safe.’”

Yet, despite the danger, at least dozens of Kahnawa’kehró:non rushed to the site to volunteer.

LeBorgne travelled from Europe, where he happened to be when the towers fell, but many other Kahnawa’kehró:non were already in New York City on September 11. They were there plying their trade as generations of Kahnawake ironworkers have done, building the bridges and skyscrapers that light up the city that never sleeps.

“It was heartbreaking to see the buildings go down like that because my father and my grandfather originally put up the first ones,” said John McGowan, who was working on a hull in New York City the day of the attacks.

McGowan was listening to the radio at work when the news barrelled through the speaker. He began making arrangements to volunteer, and the next day he was on-site pulling up steel, searching for survivors.

“You’re pulling bodies out and whatnot, you know, and trying to help them out to bring everybody home,” he said.

In the immediate aftermath, nobody knew how few survivors there were in the rubble, but before long, the search and rescue transitioned to a grim recovery effort and cleanup.

He worked at ground zero for three-and-a-half months, seeing through much of the cleanup before returning to ironwork. Today, he is feeling the health effects of his service at ground zero.

Despite the risks, some of which were unknown or unspoken at the time, McGowan didn’t hesitate to volunteer.

It is many of these first responders who will be honoured in New York City on Sunday at a memorial event at St. Paul’s Chapel, part of Trinity Church Wall Street, a place where volunteers and workers paused to rest and collect their thoughts as they put in long days at ground zero.

Thousands of first responders have died since the attacks, many from diseases linked to the toxic soup that clung to the air at ground zero. Their names will be recited at the ceremony starting from 2 p.m. on September 11.

LeBorgne, a Mohawk Council of Kahnawake (MCK) chief, will speak at the memorial, although not in an official capacity. “I’m speaking what I experienced and what I saw,” he said.

When he first arrived at ground zero the Monday after the attack 21 years ago, it was difficult for him to process what he was seeing. He could not fathom that these two towers, once the tallest in the world, were just gone.

“My dad worked on the World Trade Center several times while it was being constructed. My uncles, cousins, friends – so a lot of people from the community worked there,” said LeBorgne, a former ironworker for many years.

LeBorgne put in five 12-hour days at ground zero before returning to Kahnawake to resume his duties as a Council chief.

“Being much older now, my military days were way behind at that point. So that was my way of contributing. I couldn’t not go. I couldn’t just stay home. I said, if I can do something, I’m going over there. And that’s why I went,” he said.

“I think a lot of the guys that went there felt the same way I do.”

The events of 9/11 made an indelible mark on LeBorgne, as they did on many other Kahnawa’kehró:non and people throughout the world.

“I think it’s just fitting that Kahnawake showed up there and did our part,” said LeBorgne. “I wouldn’t say we did it for Kahnawake, but in a way, maybe we can say that because everybody I’m sure had on their minds, you know, if a fight comes to North America, my family’s here, my friends.

“All the things that we know are here, and in a way, you want to defend that.”

The Calling of the Names Ceremony will be streamed live online at 2 p.m. on September 11 at TrinityWallStreet.org.