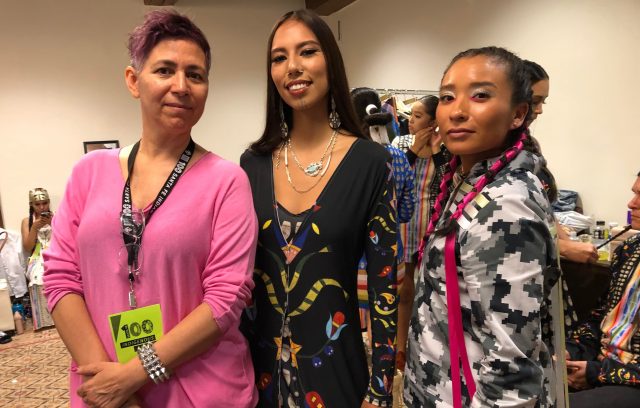 The Southwestern Association for Indian Arts (SWAIA) celebrated 100 years of its Santa Fe Indian Market with an expanded programming and two whole days of fashion shows.

Last week, artist Skawennati and her Calico & Camouflage clothing line took to the catwalk for the Indigenous Fashion Show. It was the first time her clothing was modelled in a runway show.

“I was excited, yet calm. I knew I was as ready as I could be and I just had to go through the process,” said Skawennati.

Her cousin Kathleen Dearhouse accompanied her down to Santa Fe, New Mexico, initially to take advantage of the travel opportunity until she quickly became an assistant preparing for the show by steaming the garments and getting the models ready.

“I ended up becoming her assistant almost by accident, I guess,” said Dearhouse. “I went in with her very early in the morning, just to help bring her supplies and bags and things, and we became so busy immediately that I ended up staying almost all day actually – and even walked the runway!”

Dearhouse had helped sew the garments when they were first made back in 2020, in the early days of the pandemic. So when Skawennati walked the runway after her models as the collection’s designer, she took Dearhouse with her.

“I couldn’t go out without Kathleen because I couldn’t have done it without her,” said Skawennati.

“I didn’t think I wanted to go out there (on the catwalk); I wasn’t looking forward to it. But everyone was cheering and smiling, and so I waved like I was the queen!”

The artist designed the Calico & Camouflage collection in 2019 for her avatars, digital characters she uses in her digitally-based visual work. The avatars dressed in the clothing line were first displayed in Toronto’s Yonge-Dundas Square.

The collection plays on two items of clothing, camouflage pants and ribbon shirts, by reversing the patterns and adding ribbons to other parts of the garments, like the pants. With this clothing line, Skawennati is reimagining Indigenous and particularly Kanien’kehá:ka protest wear.

At the Santa Fe Indigenous Fashion show, Sunday was a big day for Skawennati and Dearhouse – they showed up at the venue at 7:30 a.m. to start getting ready for the show.

“I wanted to be there to greet everyone and be available to all my models and to meet them all for the first time,” Skawennati explained.

“I had selected looks that were futuristic or cyberpunk to resemble my avatars, and so it was super fun to see these people being transformed into these fabulous looking models/avatars.”

Of her six models, Skawennati was happy to discover she had one Mohawk model, Ahkhwesahsró:non Steven Thompson-Oakes.

“I was so happy to see him!” she exclaimed.

Thompson-Oakes was also very pleased with their shared culture.

“I was so surprised that there was another Mohawk designer there. I didn’t know of her until I met her there, so we both met each other for the first time. I was excited, like ‘oh my god, there’s another Mohawk artist here who’s got ribbon shirts!’” he said.

“I just related to it because I participate in the Longhouse, and I wear ribbon shirts, so just seeing it futuristic was very cool and very inspiring. I even wanted to take that shirt home.”

For Thompson-Oakes, the whole experience of participating in the show as a model was really inspiring.

“Just seeing over hundreds of different Native people coming from all different parts of Turtle Island, coming together for that same common good, that beauty of our culture and of our fashion.”

Dearhouse echoed that sentiment, saying she was so happy and amazed to watch the hustle and bustle behind the scenes of the show.

“I was very happy to see them all on the runway. It seemed like when the models showed up, the clothes just fit the person perfectly. They were all very enthusiastic. They loved what they were wearing, so it was wonderful.”

A photographer from Vogue even took some photos of Skawennati and her models, much to the excitement of them all. Skawennati’s other models were Hannah Prairie Chief, Erica Pretty Eagle, Kira Doxtator, Gavi, and Jade Vargas.

For Skawennati, nothing beat the moment when her models took to the runway during the rehearsal, and she got to stand in the front of the empty room and see her clothing take centre stage.

“I was overcome. It was just exciting. And these people, I never knew them, I didn’t know them before, but they were just beautiful people inside and out, and they cared so much about realizing my vision.

“I was super happy.”