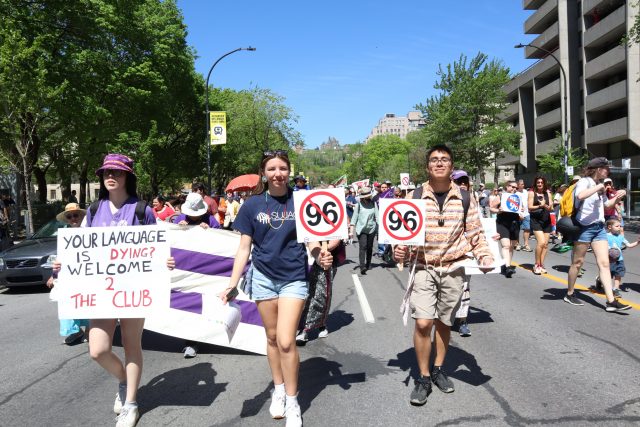 An email with the subject line, “We won!!!” reached Mohawk Council of Kahnawake (MCK) chief Tonya Perron’s inbox while she was in a meeting two weeks ago.

Perron was unable to immediately celebrate the news that the Quebec Superior Court had issued a ruling to suspend two provisions within Bill 96, but she eventually found time to rejoice.

Before the case went in front of the court, Perron submitted an affidavit expressing the MCK’s support of a challenge against articles 9 and 208.6 of the law, which mandates all entities with legal personhood to provide certified French translations for all court documents, and prohibits cases without certified French translations from being filed. It was the second challenge against Bill 96 since it was passed in May.

“I immediately thought to myself, ‘wow,’ (because) I don’t want to say it’s rare, but these kinds of challenges are very difficult to succeed at,” Perron said. “Especially this one, considering it’s Bill 96 and this whole thing about it not being really open to challenge with the notwithstanding clause.”

The MCK was invited to support the challenge as an entity that could be impacted by the provisions. Perron was joined by MCK grand chief Kahsennenhawe SkyDeer and chief Arnold Boyer at the Palais de Justice in Montreal on August 5 to further demonstrate their support for the case, as a group of five lawyers who launched the suit argued that the provisions were in violation of rights guaranteed in the Constitution Act of 1837.

“While the protection of French is undoubtedly crucial, two of the provisions of Bill 96 – sections 9 and 208.6 – are unconstitutional,” the plaintiffs argued in Mitchell v. Quebec. “The requirement to use both official languages is in and of itself a violation of Section 133.”

Section 133 of the Constitution Act protects a legal person’s fundamental right to access justice in their language of choice, whether in French or English. Given that the law was scheduled to come into effect on September 1, lawyers argued that “it is urgent to decide this stay motion.”

A week later, Justice Chantal Corriveau of the Quebec Superior Court granted a suspension to both articles of the law until the arguments of its constitutionality can be heard in November. In the judgment, Corriveau sided with the plaintiffs and cited its potential violation of constitutional rights in equal and full access to the law.

“The evidence demonstrates a serious risk that, in these cases, certain legal persons will not be able to assert their rights before the courts in a timely manner or will be forced to do so in a language other than the official language which they and their lawyers master the best and which they identify as their own,” Corriveau wrote.

In the affidavit issued, Perron provided a statement based on consultation with council members and elders and detailed the ways that Bill 96 could affect the MCK as well as small businesses, non-profit organizations and individuals within the community of Kahnawake. She wrote that imposing French translations to legal documents would incur costs and delays and could “discourage and dissuade many legal persons operated by community members from using the justice system entirely.”

Perron also referenced the Truth and Reconciliation Commission’s final report and cited its calls to action in addressing language barriers and access to public services and justice.

“It is hard to see how any Legault finally meets grand chief progress can be made on the issues raised in these reports if English cannot be effectively used before the courts of Quebec,” she said.

“On the one hand, it’s helpful to hear that, and we can certainly see how we can extrapolate from that,” Perron said. “But on the other hand, what does it mean for other matters that are not related to Bill 96?”

Félix-Antoine Doyon, a lawyer who represents the plaintiffs in the lawsuit, said that regardless of whether entities within Indigenous communities are considered legal persons within Bill 96, it is important for the law to consider the languages they prioritize.

“Even if the MCK is not a legal person, I think the whole point here is to keep in mind that some Indigenous people own legal entities, and their second language is English,” Doyon continued. “But that doesn’t mean that we do not care about French. It only means that we care about communities who need to address the court in English.”

Doyon said he does not believe that the legal personhood of band councils or Indigenous communities will be a focus in the forthcoming trial in November and that the group’s principle argument is to protect the right of Indigenous Peoples to address the court and access justice in English.

Following the decision, Perron said that it was a win for the community in more ways than one. She noted that Corriveau cited the MCK’s affidavit in the judgment and pointed to potential impacts on the community as a reason to suspend the two provisions.

“It’s a win in the sense that this was one of the concerns we raised during all of the hearings leading up to Bill 96’s passing,” Perron said. “So although we don’t look to the (outside) court for any type of acknowledgement, it’s important that the court acknowledge that we have legitimate concerns for the MCK, the community in general, businesses and organizations.”

Perron said that it was also a win for businesses and those with legal personhood in the community who will not be subject to additional costs or barriers in accessing the courts temporarily.

“An organization that is not a legal person is not exempt from the application of the Charte de la langue française,” said media relations personnel Isabelle Boily in a statement from Quebec’s Ministry of Justice. “Recall that this measure introduced by the Loi sur la langue officielle et commune, le français, aims to promote access to justice in French for the entire Quebec population. As the file is currently in court, we will make no further comments.”

Perron expressed that broader language autonomy within Indigenous communities is a necessary step towards reconciliation.

“As a community, we have chosen to revitalize and promote our own language. Many Kanien’kehá:ka choose to learn French, just as I did during my own education,” Perron said. “But there is a fundamental difference between a choice and a demand. Learning and using outside languages must always be a matter of choice, not obligation.

“Any attempt to compel the use of another language can only harm the progress of our community and undermine the path towards reconciliation. Creating an additional language barrier within the justice system does not demonstrate a serious commitment to reconciliation.”