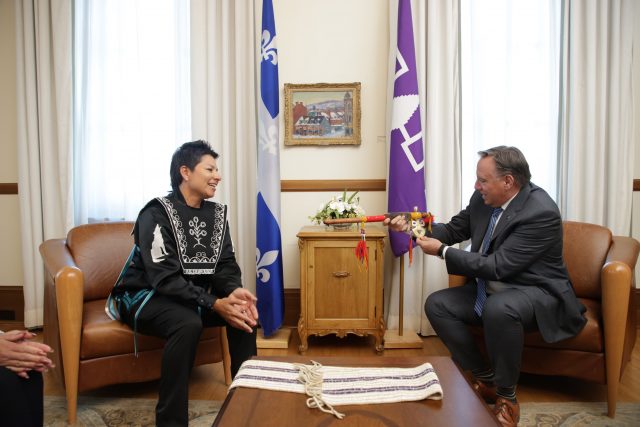 It was the first time since being elected premier of Quebec in 2018 that Legault met face-to-face with an MCK grand chief.

His apparent reluctance has long been a cause of consternation for Kahnawake, especially as the MCK has worked to hash out a new relationship framework agreement with the province.

“I think nothing can beat a face-to-face meeting because you really get a sense of whether people are being sincere and coming from a space of wanting to commit to working on our relationship together,” said Sky-Deer.

“That is the sentiment I felt today, and that’s what I’ll be bringing back to the council and, by extension, the community.”

The request for a meeting with Legault took on new urgency after Council halted sectoral table discussions with the province two days after Quebec’s passage of Bill 96, which incensed Kahnawake by bolstering the Charter of the French language without consulting or exempting the community.

Sky-Deer outlined a meeting with the premier as the core demand that needed to be met before Council would reopen these discussions.

Language was a major topic of discussion at the Tuesday meeting.

Perron, who is a lawyer, conceded to The Eastern Door that an exemption may no longer be feasible given the nature of Bill 96 as legislation that amends multiple laws, but she insisted Kahnawake’s concerns must be somehow addressed.

Legault and Lafrenière instead focused on a potential new law to strengthen Indigenous languages and cultures in the province.

“I had to express to them that I don’t feel it’s Quebec’s role or responsibility to do that,” SkyDeer said. “I feel like it’s ours as nations, as Indigenous people, but that they can provide us with the tools and resources to augment what we’re already doing and provide more (resources).”

Other commitments from the meeting included Quebec working with Kahnawake to finalize the relationship agreement and a contribution from the province to the proposed cultural centre that will house a museum and theatre.

“There’s a renewed sense of commitment (from Quebec),” Sky-Deer said. “I think we also hold them to their word, and now let’s see the actions that follow. And we committed ourselves to work on this relationship, because it’s not just for this generation, it’s important for our future generations.”

She feels that Legault seemed to agree action was needed to advance files relating to Kahnawake. “He kept asking Lafrenière, like, ‘what’s going on here, I thought I put you in charge to make big things happen,’” Sky-Deer said.

Perron noted that Lafrenière has been accessible and responsive to Kahnawake’s concerns.

“Premier Legault and minister Lafrenière had a very productive and positive meeting with grand chief Kahsennenhawe SkyDeer yesterday,” said Mathieu Durocher, spokesperson for Lafrenière. “Together, they were able to address certain issues like educational success and our nation-to-nation relations.

“Together, they were also able to discuss the cultural centre project the community has, as well as how we can work in collaboration to put together a bill to respect, promote, and valorize Indigenous languages and cultures.”

Durocher’s response to The Eastern Door’s enquiries did not address a question as to why a meeting between Legault and Sky-Deer took so long to come to fruition.

Sky-Deer will soon discuss with Council whether the pause on political relations should now be lifted and, if so, to what extent.

Perron is in favour of restarting relations, even if tentatively. “Sometimes we need to engage because it’s beneficial to us as well,” she said.

She said she understands why many in the community may be skeptical, adding that she too is sometimes skeptical, but that finding ways to engage in dialogue and move forward is critical.

“The last thing we do is wake up in the morning and figure out what we can do today to sell out. That’s not what this job is about. And that’s not what these meetings are about,” she said.

Perron also emphasized the need to measure Quebec’s sincerity by taking stock of its actions.

“For me, words and commitments are just the start,” she said.

“The thing that (Legault) said is that he’s looking for a new relationship, something that was never tried before,” said Deer, who invoked cultural symbols in the meeting to illustrate the importance of approaching the relationship with a good mind.