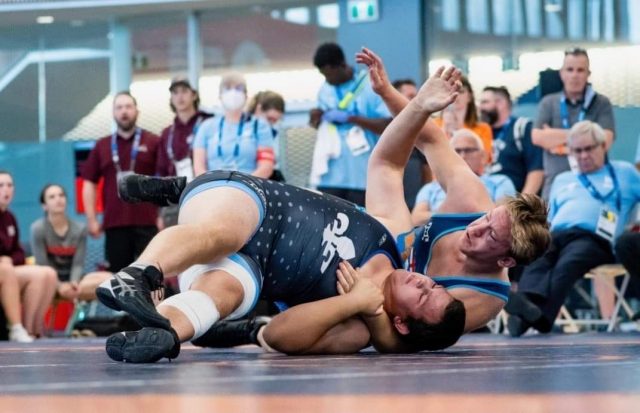 So far, the 2022 Canada Games have been an opportunity for our local athletes to shine and showcase their immense talent.

And although they are all part of Team Quebec, they are there representing Kahnawake in all its glory. From softball to wrestling to paddling and lacrosse, here is a breakdown of the games so far.

“The competition was a gruelling three-day marathon. The first two days were team competitions where Team Quebec would face off against other provinces. Depending on the results of your matches during the team competition – that would seed you for the individual competition on day three,” he said.

Cross said that his biggest challenge was trying to compete at the highest level while dealing with a multitude of injuries he sustained at the beginning of the season.

“I’ve been battling with shoulder injuries and knee injuries that have halted my progression in the sport. So, working around my injuries was a massive hurdle to hop, especially due to the fact that I had severely injured my right shoulder leading into the competition.”

But the young wrestler pushed through and made it to the podium. He said that he felt a sense of relief when he won bronze, plus he got to keep a promise he made to his brother Logan.

“My little brother Logan is a big inspiration for me. He was bullied a lot in school, and I promised I would bring a medal back from the games for him because he started wrestling with me at our club. So being able to fulfill that promise and keep him motivated in the sport and being around me meant the world.”

“For the athletes, I know it’s a once in a lifetime opportunity. Basically, the Canada Games are like a junior Olympics. It gives them a taste of what it’s like if they continue in their sport,” said Montour.

And for Montour, the games became a true family affair as his son Otiohkwanoron was also a coach under the Aboriginal Apprentice Coach Program, and his daughter Sabrina was part of Team Quebec.

“She is my youngest, so being there to experience it and to be in her corner while she was wrestling was an amazing experience for me,” said the coach.

“Sabrina worked really hard, but she had been dealing with a back injury, so she didn’t get the results that she wanted, but just the fact that she toughed it out for the entire tournament, she proved that she is a warrior through and through.”

In fact, Team Quebec’s female wrestling team got the highest results since they started wrestling at the Canada Games in 2009, placing seventh place overall.

“I think that it’s cool how far we have all come as a team and that we were able to pull it off, and overall I’m proud to be a part of that team,” said Sabrina.

“Jordyn is another amazing story. Her father (Winston Goodleaf) wrestled at the Canada Games in 2009. And Jordyn’s father passed away about five years ago. And she wanted to wrestle at the games as he did, and she made the team.”

For Konwana’karen Diabo, the competitions have been a whirlwind where her skills and abilities have excelled, winning the bronze medal in the C1 500M.

“I finished with 2.14.77 – 0.07 seconds from the second place time. I usually favour the shorter sprints, but it felt great!” said Diabo.

“I’ve had so much support from the coaches, from my parents, and family and friends back home in the last few days that the distance doesn’t even matter. It’s extremely motivating having so many people on my team. We just get out on the water and enjoy it as best we can!”

Diabo also won bronze in the Women’s C1 1,000M – a feat she said surprised her because she hasn’t seriously raced the 1,000M in a couple of years.

“And then we did the C4 500M. And it was a very close race. Definitely the most exciting. The Ontario and the Nova Scotia boats are both really strong crews, so we weren’t expecting second place,” she said.

“But when we started the race, we started ahead of both Ontario and Nova Scotia. We were shocked. We felt so powerful and in sync. We couldn’t believe how close we were to the other team.”

She has one race left at the Games today (Friday), the C4 200M sprint.

The women’s softball team made history, winning silver at the games. Team Quebec won six out of the eight games that they played.

“(Winning silver) was the most amazing feeling!” said Emily Meloche, who tied for the top batting average of the whole tournament with a .609 batting average.

“Plus, it was the first time that Quebec had ever gotten over bronze in softball. We were so happy to experience it together with our team because we have been working towards this for two years and our goal was to make it to the podium. So, getting the silver was a step up from our goal.”

Her mother, Lisa Westaway, said that she was so proud of Meloche and the entire team, especially because they had a rough start losing their first game.

“It feels great! My team played really well this past week at Canada Games. It’s really exciting to see our work for the past two years paid off, and it was nice to see how good we could do in a big tournament like this,” said Bonnie Zachary.

As of press time, Team Quebec had one more game to play, so check back next week for the full results.