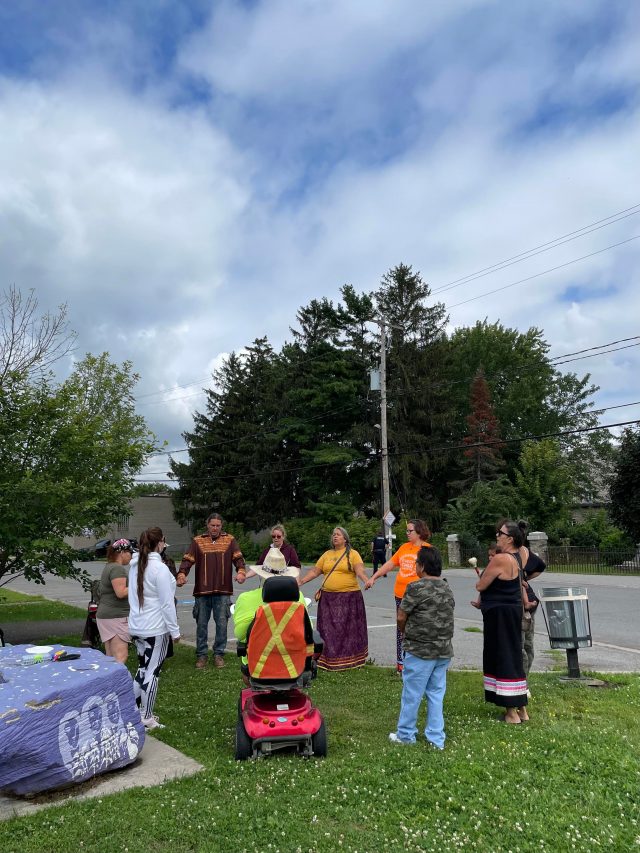 More than a year after she stepped forward, Patricia Kaniente Stacey watched from across the street as the remains of the late priest Léon Lajoie were exhumed.

“Those 215 children brought this out of the people,” Stacey said. “The truth about what happened here.”

After 215 unmarked children’s graves were uncovered at a residential school in Kamloops, BC, several community members, including Stacey, came forward with allegations that father Lajoie had sexually abused them when they were children. Lajoie was a Jesuit priest at the St. Francis Xavier Catholic Church in Kahnawake for 35 years, where he was buried after his death in 1999.

The allegations brought alleged victims and their supporters to form a group, which began to gather across the street from the church on Sundays last summer. After a year of discussions, a survey, an investigation and a poll, the group’s calls for the exhumation of his remains were answered Wednesday.

Word of the exhumation began to circulate on Facebook Sunday, but was largely considered a rumour. Despite reports confirming that the exhumation would take place between 8 and 8:30 a.m. Wednesday, members of the group were skeptical. By early Wednesday morning, the skepticism had turned to displeasure.

“There’s been a small group of us who have been here since last year. We were here every Sunday. In the rain, in the snow, we were here,” said Konwatsi’tsawi Lahache-Deering. “And they felt no need to let any of us know. And obviously not let the survivors know.”

Lahache-Deering  is one of the group’s original members, and said they were last updated on the status of the exhumation in May, before a date had been finalized. She and other group members – including Stacey and another alleged victim, Michael Diabo – said neither the Jesuits of Canada, the St. Francis Xavier Mission, nor the Mohawk Council of Kahnawake (MCK) had involved them in the planning of Wednesday’s exhumation.

“I would have liked if at any point in time, they would have talked with us instead of acting like we’re just some kind of a nuisance,” Lahache-Deering said. “And it’s so strange that anybody could believe this should be hidden, that this should be something quiet.

According to the MCK: “The process is being conducted by the Jesuits of Canada, following all of the legal requirements necessary in these instances. The persons directly affected in this matter have been updated on the situation and will continue to be informed. Please note that the MCK has no direct role in the actual process as its only role has been to facilitate resolution of this emotional and complicated matter,” read a statement emailed to The Eastern Door.

In response to the allegations that the group was not included in organizing the exhumation, the Jesuits of Canada said, “The repatriation of Fr. Leon Lajoie’s remains has been planned in consultation with the Mohawk Council of Kahnawà:ke (MCK), the Community and the Parish Council of St. Francis-Xavier Mission.”

The Jesuits of Canada were unable to clarify which members of the community other than the St. Francis Xavier parish were consulted.

On Wednesday, Peacekeepers cordoned off the street in front of the church, and prohibited observers and media from approaching the property. Lahache-Deering and other members of the group asked MCK chief Arnold Boyer, who was present at the event, to pass along a request to observe the exhumation from a closer distance. They said they wanted to witness the exhumation not for amusement, but for reassurance that we was truly removed.

A member of the parish later approached the group to deny their request. But Lahache-Deering and four other group members were ultimately escorted by Peacekeepers to observe the site briefly at the fence bordering church property.

Despite mechanical difficulties with a backhoe that delayed excavation, the exhumation concluded at around 10:30 a.m. A white van with Lajoie’s remains pulled out of the church’s lot headed toward the Jesuit Cimetière des Jésuites in Saint-Jérôme. A source with knowledge of the situation said Lajoie’s interment is scheduled for today (Friday).

“Out of respect for everyone who has consulted with us in reaching this solution, we cannot comment at this time except to say that the Jesuits will be welcoming home one of their own to his intended resting spot,” the Jesuits of Canada said in a statement. “We have faith that the repatriation will lead to a peaceful solution to this situation and promote healing in the community of Kahnawake.”

The Jesuits had commissioned an investigation into the allegations against Lajoie, which culminated with the release of the executive summary in March. The summary detailed the investigation’s methodology and findings, and recounted that three alleged victims had been identified and two participated in the investigation, though media reports have indicated that as many as 20 individuals had privately disclosed allegations to the community group.

The investigation’s findings did not support the allegations of abuse against Lajoie, but did support a finding of fact that a community member was the victim of a serious sexual assault that had taken place at the church.

When the exhumation was complete, the group and its supporters joined together in song in the same spot they’d convened over the last year. Sandra Deer thanked her fellow group members in a final address as they held hands.

“We’re still here, and we’re still going to continue healing. But this is all done now,” Deer said.

While the day was certainly a triumph for the group, many saw the year-long battle for exhumation as one that could have been prevented.

“The band council at the time should have never allowed him to be buried here,” Stacey said. “Back in 1999, a group of women protested not to have Lajoie buried in our territory, and they weren’t listened to. And now, the next generation of strong women stood their ground for one whole year with the men supporting them. The strong, beautiful women won this together.”

Kelly Robertson, one of the group’s earliest members, said she fought in support of his exhumation, for her grandmother and others who were not allowed to be buried in Kahnawake after marrying outside of the community. She discovered Lajoie was buried behind the church when she was a bookkeeper for the St. Francis Xavier Mission, and was both shocked and appalled. She said it had always been a thorn in her side to know that a non-Indigenous member of the church was allowed to be buried on Mohawk territory when many other Kanien’kehá:ka were prohibited.

After most of the group had dispersed, Stacey sat in quiet reflection with her friend and the group’s spokesperson, Melissa Montour-Lazare.

“When we follow the path of peace, united with good clear minds, according to our ancient teachings our ancestors have passed to us, our people can achieve so much,” said Montour-Lazare.