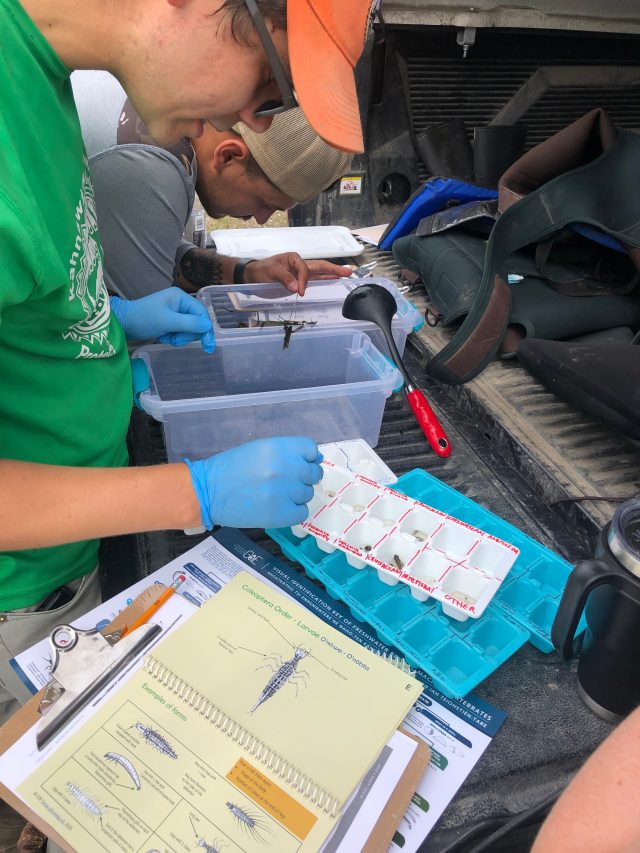 Julie Delisle grew up learning about the waters in front of her home from her father and grandfather. This fall, she’ll be facilitating a pilot program for students in Kahnawake to learn about those same waters she’s grown to love.

Delisle is the environmental education liaison at the Kahnawake Environment Protection Office (KEPO), promoting environmental and STEM education to the community through social media and partnerships with schools. Her latest project is spearheading KEPO’s  Adopt a River program in partnership with Groupe d’éducation et d’écosurveillance de l’eau (G3E), which is set to begin in the fall with students in the grade 10 science program at the Kahnawake Survival School (KSS).

“In general, Adopt a Rover is an ecological monitoring program for the waters,” Delisle said. “The students learn about the different waterways in the community, doing site analysis on the waters, macro-invertebrate and fish sampling, studying physicochemical parameters, and using all these things to get a picture of the health of the waters.”

The original program was first launched by G3E in 2000 but was then adapted for the community of Kanesatake to add cultural connections for the Kanien’kehá:ka. G3E recently extended an invitation to the Kahnawake community to pilot Tehont’nekanonhnha, which means “Water Guardian” in Kanien’kéha.

Many of the program’s materials have been translated into Kanien’kéha, and the program includes classes with elders in the community who will share their expertise and knowledge on Kahnawake’s waters.

In July, G3E visited Kahnawake to conduct a facilitation training with KEPO, which was a look into how each of the eight chapters in the program would run. Depending on the curriculum planned by teachers, students could be working on Tehont’nekanonhnha into the spring.

“What’s also cool is that all the information they gather in the data will benefit KEPO as well, because we get to keep all the research and data,” Delisle said. “It’ll help us with our studies of the waters too, because if we’re able to do the program year after year, we’ll be getting a better idea of the health of the different waters in our community.”

Delisle said that the program can be adapted for different ages and classrooms, and could even align with the social studies curriculum when students learn about the history of Kahnawake’s waterways.

Brandon Rice, a project support technician at KEPO and one of the program facilitators, said he’s looking forward to learning along with students.

“For me, it’s coming full circle, because I didn’t have this opportunity as a kid,” Rice said. “We fished and stuff, but we never had a deeper understanding of why we were fishing or what we were fishing for. So being able to give back this knowledge is the best part of my work.”

Tyler Moulton, environmental projects coordinator and another program facilitator, said that educating younger children to monitor water systems in the community is an important part of environmental preservation, which makes it possible to monitor changes in the ecosystem.

“There is really important information to be gained from talking to people who used to swim in these creeks when they were younger, but I don’t think we would see swimming in these creeks now, and what life used to look like and how the flow has changed,” Moulton said. “Trying to connect kids to the present, but also to the past and future ecosystems is a really important thread to keep through the generations.”

For Rice and Delisle, who both grew up fishing, the water remains a sacred connection to their community and ancestors. While students in the program will learn techniques like netting for fish identification purposes, it was once a practice that Indigenous Peoples depended on for survival.

“Our people were doing that for thousands of years, and fast forward to now, we’re doing it just to reteach our younger generations what netting is,” Rice said. “So for me, it’s more of a historical and cultural significance that has changed my life. It’s a bit of reconnection, and although it is a bit different, we’re still doing the things that our ancestors did thousands and hundreds of years ago.”

Delisle said she’s most excited about incorporating more traditional and cultural knowledge into STEM education, which is currently centered around western science. She also hopes that the pilot attracts more interest from teachers of younger students to impart environmental protection and Indigenous knowledge as early as possible.

In the meantime, Delisle’s father is anxious for the program to launch too. And given that one of the program’s first sites could be in his front yard, he’ll have an exclusive look at the next generation of environment protectors. It all came full circle for Delisle at the training in July, when she was netting with the team right in front of his home.

“He had been watching us collect fish and he said, ‘I finally came out because I had to see what you guys were doing,’” Delisle said with a chuckle. “He said, ‘I couldn’t wait any longer.’”