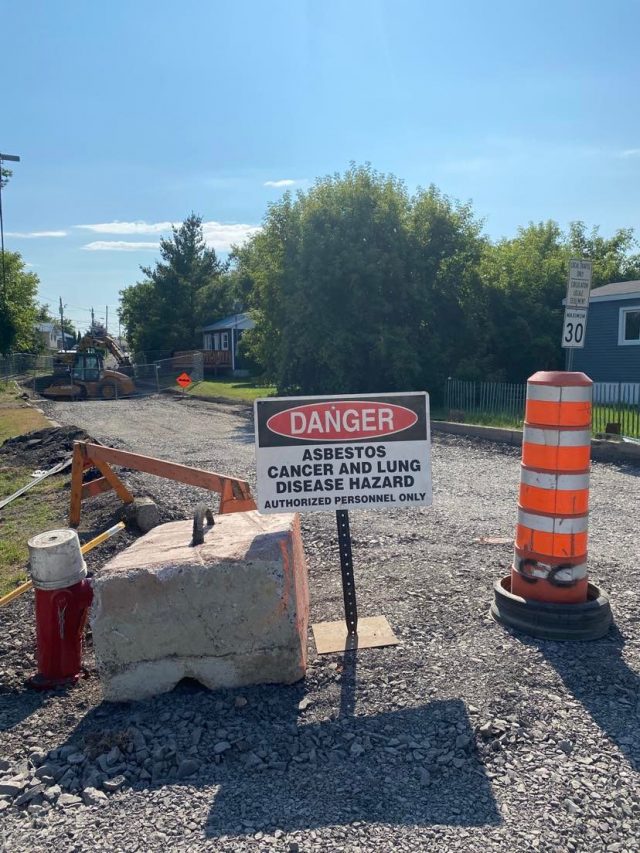 More than eight months after the Mohawk Council of Kahnawake (MCK) accepted the final report of the Deloitte investigation into Kahnawake’s asbestos problem, a global remediation and management plan to remove it is still weeks away from being finalized.

“I do get a lot of the frustration from the community, and rightfully so,” said MCK chief Cody Diabo, the Council point person for the file.

“We’re kind of stuck in this middle part now, through all the red tape and bureaucracy.”

According to the Deloitte investigation, Council and Legal Services learned in 2019 that large amounts of asbestos-laden landfill had been used for Lot 106. However, asbestos was being discovered in the years since 2016 when it was used, and multiple departments became aware of a problem in the ensuing time.

Diabo said he is tired of asking Kahnawa’kehró:non to be patient on this issue.

“I think those are not words that are comforting anymore because even myself at this point, I am not sure if anything’s going to be done on a large scale this year,” said Diabo.

He said this issue is taking up a lot of time for MCK staff, and he hopes to see delays end soon.

Currently, rather than implement combing community-wide – a strategy he said has been recommended by experts – only small-scale pilot projects are likely to proceed in the near term, he said.

“Combing is being considered as an option,” said Onerahtókha Karlie Marquis, executive director of the MCK. “However, until the Council makes the final decision on the strategy, I can’t say decisively what the final approach will be.”

Asked whether asbestos is continuing to be found in the community, Marquis replied that it’s possible the odd fragment is being discovered.

Kahnawa’kehró:non who find fragments in their yards that they suspect to contain asbestos should contact MCK’s Public Safety Unit. If the fragment is large enough, it can be removed right away. If there are fragments that are too small to be captured by current processes, they will have to wait for the global remediation plan.

The Eastern Door’s lot on the Old Chateauguay Road was recently found to contain multiple large fragments of asbestos-containing material, including broken-up pipes. A report was made and the MCK is aware of it.

In the meantime, Marquis said the community is safe based on a health risk assessment that was done.

“As a community member myself and somebody who’s been working on the file, I understand people’s frustrations,” she said.

“This is a priority file, not only politically but administratively as well, and I will continue to work diligently to ensure that we address the situation and that into the future this type of situation doesn’t happen again in our community,” she said.

Marquis attributed delays on the file to its complexity.

“All I can say is that it’s taken us time to find the right experts and to have all the required work done to understand the scope of the problem, to also identify the possible solutions, and then to come up with a feasible approach, which also takes into consideration community funds,” she said.

The executive office has also been working on a plan for the implementation of Deloitte’s recommendations to present to Council.

“It was evident from the investigation that many of our internal communications and processes have to be addressed. This requires a lot of internal work that is ongoing to how we’re going to address the issues that were highlighted in the report,” she said.

“Unfortunately, it’s not something where we can just flick a switch and the issues will be resolved.”

Marquis said she was unable to say whether any MCK employee has been reprimanded or dismissed as a result of the asbestos situation, describing it as a confidential human resources issue.