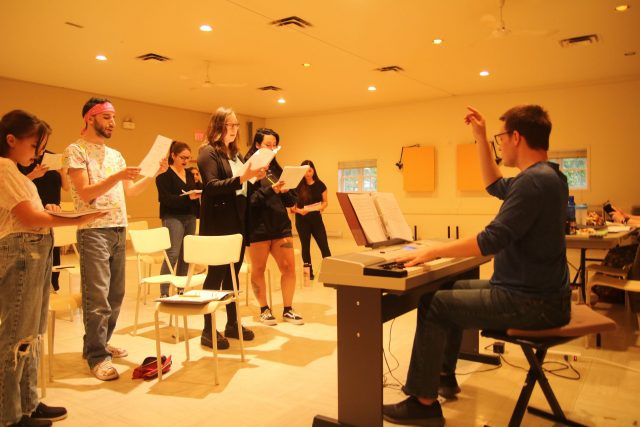 After months of hard work, the cast and crew for Urinetown: The Musical are almost ready to ditch their rehearsals and make their way to the mainstage.

“The show is in a very good state right now, I think audiences are going to love it,” said the play’s co-director Kirk Elsmore. “I’m confident to say as well that it’s the best show I’ve ever directed or been a part of, I believe. It’s very powerful.”

The musical is a Starcatcher Productions and Turtle Island Theatre Company joint project, directed by Elsmore and Kahnawake’s Kyle Zachary. It will be on at the Chateauguay cultural centre’s Jean Pierre-Houde Theatre from August 16 to 20.

The Tony award-winning Broadway hit presents “a satirical narrative about capitalism, sustainability, corporate greed, all that stuff, but it’s packed all those huge topics into fun songs and many laughs,” said Elsmore.

Because of a shortage of water which is controlled by a greedy company, people have to pay to use the bathroom. But when the people start to protest, things start to unravel.

“It’s a really, really great story, a really great musical that we’re doing and I’m really happy to be a part of it,” said Brandi Jacobs, who plays Little Becky Two Shoes, one of the supporting characters.

“I do have my own song and dance number; she is on the good side but she’s not exactly a good person. She thrives on the chaos that ensues in the plot,” she said. “It’s a lot of fun playing her.”

There’s a lot of fun to be had in rehearsal, Jacobs said.

“The show is being put together by a really amazingly talented cast and crew,” she emphasized. “Everybody’s so passionate and brings so many great ideas to every rehearsal and we incorporate a lot of people’s ideas into the show, and it just makes it just so much more of a fun experience for everybody.”

Cast member Eric Curotte Ryder agreed with that sentiment. “It’s good to know them all. They’re very friendly people and I get along with them very well,” he said.

“He is not on a lot but he does play a very prominent role at the beginning of the production. He goes against the whole draconian rule that you have to pay to urinate.” he explained.

Ryder explained that though people describe the story as hyperbolic, he doesn’t think it’s that far from reality.

“If you go (to certain places), they won’t let you in unless they give you a key. And in order for them to give you a key to the bathroom you kind of have to buy a purchase, even if it is a small cup of coffee. They’re not going to let just anybody in. So it’s not a complete exaggeration, either.”

“There’s a lot of comedic moments,” said Jacobs. “There’’ also some darker scenes but you wouldn’t be able to tell because the music is so fun. A lot of times I’m very happy go-lucky and cheery despite the darker tones of the story sometimes.”

All three highlighted the equal distribution between Kahnawa’kehró:non, Chateauguay residents, and people from Montreal’s West Island. This brought a welcome diversity to the cast.

“The actors that we got this year, all 21 of them have been just a blessing,” said Elsmore.

And though some of them are students in professional theatre at John Abbott College, many do not have professional training. “We have a big array of talents and faces,” said Elsmore. The only requirement for auditions was to have an interest in community theatre – and to be able to carry a simple tune.

“To have actors that latched on to the music as much as we did, as much as the directing team was, it was great to work with. We had actors come in already knowing the music, actors coming in with their styles. Not much direction needed to be done with such dedicated people involved.

“Not only are the songs great, but the content, the message behind the play is very relevant to our communities and what’s going on right now.”

For Jacobs, this has been a welcome return back to the stage.

“It’s my first show since high school. I used to do Turtle Island Theatre shows when I was a kid, but after it closed I kind of lost touch with everybody that I used to work with. So it’s really nice to be back,” she said.

Entry to the show is by donation, and it’s suitable for ages 10 and up.

“Just come see it! We promise you’re in for a good time,” Jacobs said.