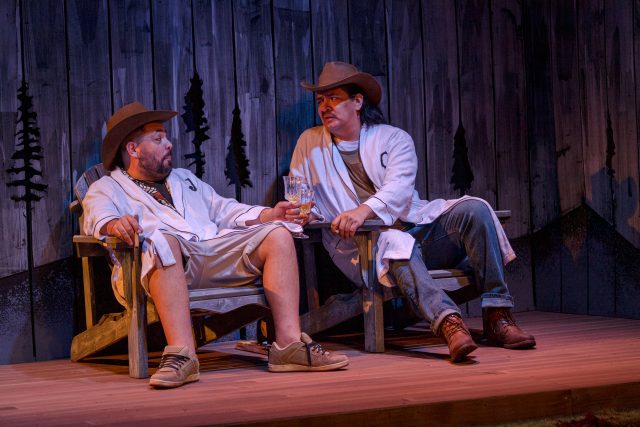 When Hudson Village Theatre’s artistic director Dean Patrick Fleming asked actor and playwright Jimmy Blais to write an Indigenous production, it didn’t take long to figure out what it should be about.

“What made the most sense to me was to be able to take a look at the relationship between Hudson and the neighbouring community of Kanesatake across the river,” said Blais, a member of the Muskeg Lake Cree Nation who is known around town for playing Watio in the hit show Mohawk Girls.

“One of the things Dean said is that he’d been wanting to write a comedy. And so I tried to think about that and come up with ways to do that,” he recounted of the early days of conceptualizing Feather Gardens.

“I came back at the end with a synopsis of a play about a guy who lives in Hudson, who ‘discovers’ something in his backyard, and that he thinks could be worth something and is also potentially an Indigenous artifact.”

The logical first step for the man is to cross the river, go to Kanesatake, and try to find someone to authenticate the artifact.

“The first people he runs into in Kanesatake are two guys, one of whom is a joker, who comes up with the idea to take this Hudsonite for a little bit of a ride. And so the next about 45 minutes or so of the play is a little bit of ruse and a practical joke.”

Blais is not from Kanesatake, but he emphasized how important it was to him to not misrepresent the community, so he worked with community members to get their input.

“There’s quite a bit in there, some interesting bits I think all in all, if I succeeded, it’ll make people think, along with making them laugh.”

It was precisely his sense of humour that made Fleming think of Blais to write a play – the second time the theatre commissions a script in its history.

“For me the idea of Hudson Village Theatre commissioning an Indigenous playwright was really exciting,” he said. “The idea of having a play about the two communities that sit right across the river from each other that are so the same and so different, it was really a beautiful idea.”

They’ve started their show run, with the premiere on August 6, at 4 p.m.

Getting to this point, as with every other project during this pandemic, has posed a few challenges.

“We’ve had two actors get COVID during the rehearsals, so we’ve had moments where an actor was Zoomed in on a laptop and we put the laptop on a rolling chair and we rolled that character around and carried on,” Fleming laughed.

“We’ve managed to laugh so much in rehearsal, to laugh a lot at the play, at the circumstances, the characters, the silliness.”

But through the laughter was a lot of learning, especially for Fleming.

Because though it’s a play about two different communities encountering each other, Blais’ intention for it was to be more about truth than about reconciliation.

“People tend to intertwine Truth and Reconciliation together all the time, it’s one thing right after the other and to me, that just doesn’t do anybody any favours,” he explained.

He said that for him, it’s important to focus on the truths that have not yet fully come to light, because only when the whole truth has been laid bare can meaningful reconciliation occur.

“I’m always thinking about what truths have not been told, how can I tell the truth in a different way, and to enlighten people to make sure that they’re actually receiving a new truth? Because I really feel like we’re not done with those truths, we’re far from the end,” he continued. “What I hoped for was that it would just get people talking.”

He mentioned that they tried to highlight the ways the two communities are similar rather than focus on the differences, and this is reflected in design and set choices.

“The other thing that the play is trying to do is also remind us that we all have this one common thing, which is the land that we live on and that we’re responsible for it. The play is a really really great reminder of that.”

For the opening show, they invited various community members from Kahnawake and Kanesatake to come watch the play and then partake in a discussion and exchange of food after, with food from both communities.

“There’ll be a conversation moderated by Montreal-based Indigenous actor Charles Bender, who’s really fantastic at facilitating conversation. And we just really want to try to get people out in specific for that day. I’d love to be able to see as many Indigenous faces as I can on that day,” said Blais before the opening.

“The goal is that no money exchanges hands between the Indigenous members of the community that were invited. So if you’re from Kahnawake, Kanesatake, Montreal and you haven’t received an invitation, send me a message, send a private message on any social media and we’ll make sure that happens.”