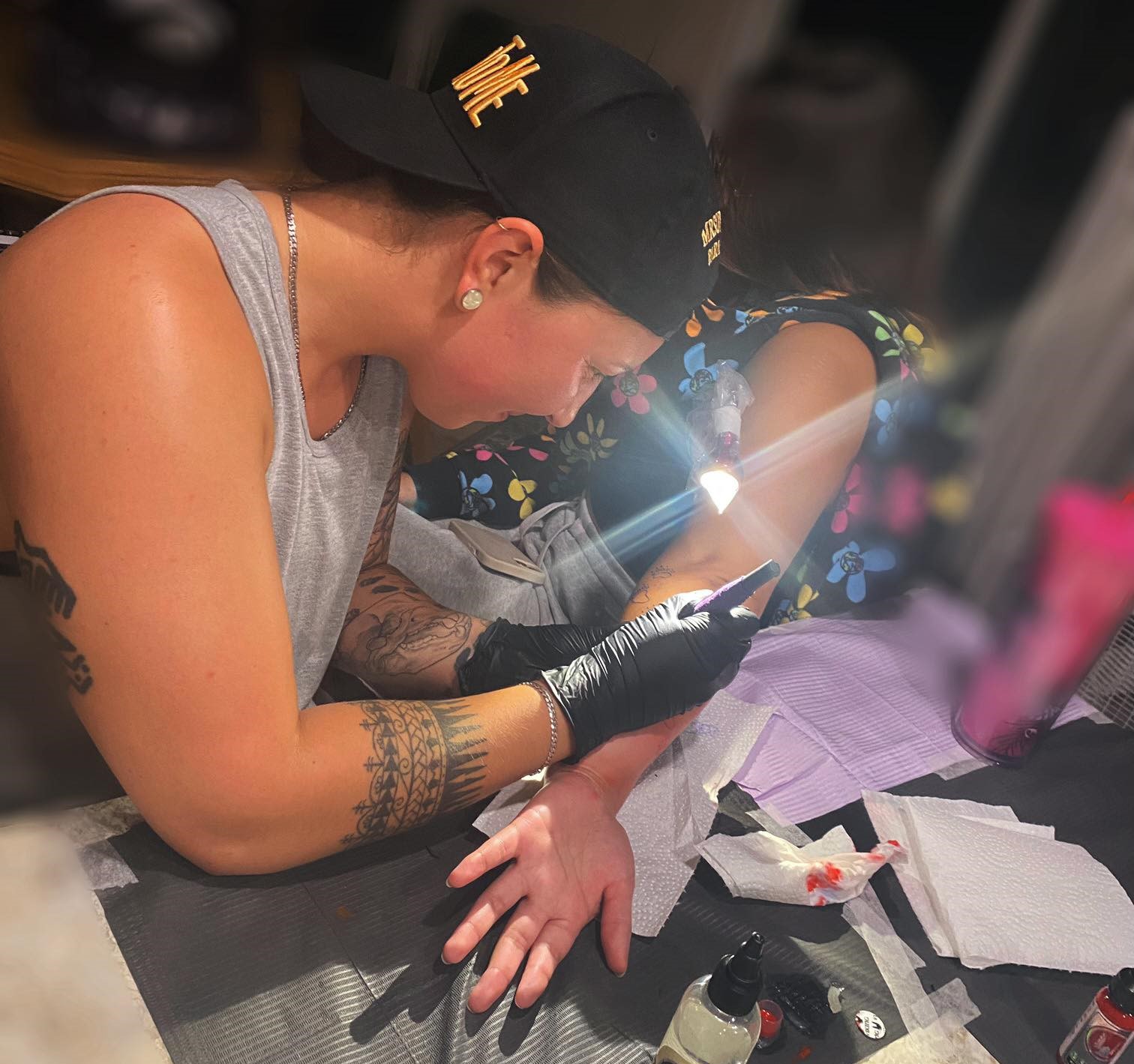 Karonhioko’he Doxtater gave her first stick-and-poke tattoo to her sister with just a sewing needle and thread. She said her start as a tattoo artist began as a fluke, but six years later, she had amassed a growing client list.

Doxtater’s availability is booked through the Kanehsatake Traditional Indigenous Tattoo Gathering this weekend, and the waitlist continues to grow. She’ll be one of eight artists at the gathering, which opens to the public at 10 a.m. on Saturday morning.

Though there isn’t a regimented schedule, organizer Katsi’tsaronhkwas Stacey Pepin said there’s much to look forward to. Committee members have planned sunrise tobacco burnings and meals for volunteers and artists throughout the weekend, as well as a Saturday night social. On Sunday, Wet’suwet’en hereditary chiefs are expected to speak at the gathering.

Pepin said the event will be drug and alcohol free, and closed to dogs. Organizers have arranged for EMTs on site, and have been working alongside an employee at the Kanesatake Health Center to reduce waste.

“We’re going to be conscientious, and overall, we’re trying to do something good for our community,” Pepin said. “Because we’re known as the 1990 people but that’s not all we have.”

Doxtater said it was activism that led her to consider tattooing people outside of her family. At a tattoo fundraiser for Standing Rock in 2016, a well-known artist saw Doxtater’s work on her sister and gave her a set of needles.

“I’m doing handpoke because we’re starting to revitalize it,” she said. “It was something that everybody knew about but not many people were doing it because of the stigma.”

Doxtater, who’s from Kahnawake, specializes in traditional Iroquois design, and is inspired by pottery and old paintings. She said her mother, Dr. Kahente Horn-Miller, a professor at Carleton University, centres her research on Haudenosaunee traditions, and would often share designs and artifacts with her. She said tattoos are an important tradition to revive.

“The younger generations are taking the responsibility to bring it all back,” Doxtater said. “We’re the ones who are digging up the roots, finding out where we came from and being proud of our roots again, because we were taught not to be.”

Over the years, Doxtater has tattooed her mother and other family members, but her list of clientele in the community continues to swell with word-of-mouth referrals. She said she’s most looking forward to being in community with other artists over the weekend.

“I think these gatherings are so important because you can actually come together and talk to each other. Not just over social media, but face to face,” Doxtater said. “Everybody is so open to sharing in these spaces, which is why it’s so important to have these events for this revitalization.”

Leilani Shaw, an artist from Kahnawake, began learning to tattoo during the pandemic and shares Doxtater’s excitement to meet other Indigenous artists in the community.

“I’ve never tattooed with more than two people in the room, so I’m very much looking forward to just seeing other styles and methods of tattooing,” Shaw said. “Tattooing in my own studio gave me the opportunity to really focus on the art, but now I really want to see what else is out there in the tattoo community.”

Shaw specializes in surrealism, and draws inspiration from traditional legends. She’s most known for her corn husk pin-up dolls, which are her own interpretation of Indigenous legends.

“For me, it feels like more of the essence of how our stories were meant to be understood,” Shaw said. “From what I was always taught, the stories could be interpreted in so many different ways. And within the artwork, it holds the story.”

Organizers said they’re hoping to bring a calm and spiritual event back for the youth at the gathering.

“The feeling I had gotten when I went to the tattoo gathering in our sister community in Tyendinaga, which I hope will resonate with our gathering, was very welcoming, calm, spiritual, and ceremonial,” Pepin said. “And you know, people might shed tears because this could be part of a journey for them.”

Walking together tomorrow for healing retreat

A new era for a familiar coffee brand