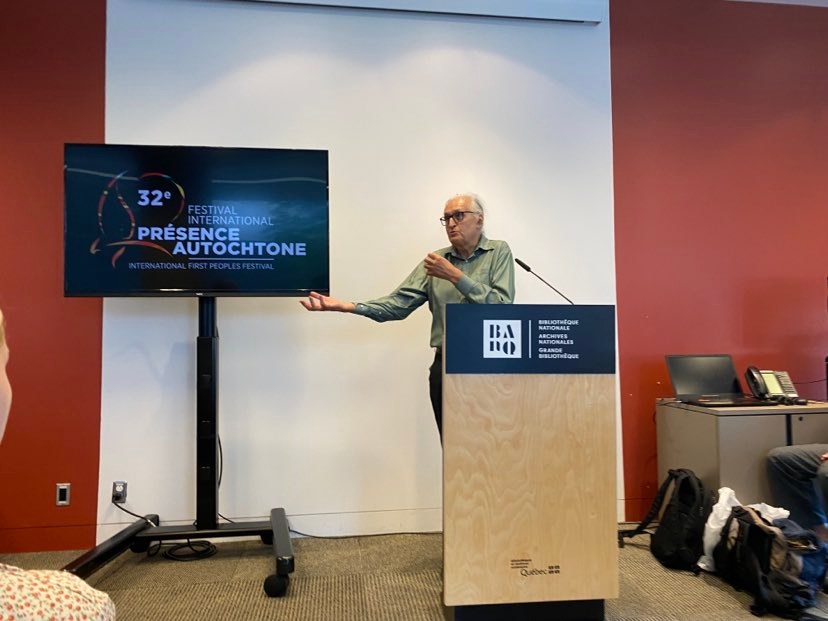 Montreal’s First Peoples Festival, or Présence autochtone, is back bigger than ever before with a 2022 schedule full of the best in Indigenous art, from here and all around the world.

“We have a really rich and eclectic program this year,” said André Dudemaine, artistic director of Land InSights, which organizes the festival.

From August 9 to 18, the First Peoples Festival will take over the Place des Festivals at Place-des-Arts, the Cinéma du Musée and the Bibliothèque et Archives nationales du Québec (BAnQ) in downtown Montreal to display Onkwehón:we cinema, music and visual arts.

The programming for the festival’s 32nd edition was released while pope Francis was in Alberta on the first stop of his self-described “pilgrimage of penance” – the coincidence was acknowledged by Dudemaine as he spoke to those gathered for the program release on July 26.

“Right now, there are people in this country trying to turn the page on a dark past,” he said. “But we are looking towards the future, as we open with the smile of youth and the energy of TikTokers: the future of First Nations.”

He’s referring to the likes of Chubby Cree, a hand drum grandson-grandmother duo making waves on the video-sharing platform who will be present for the festivities, as well as the festival’s host: TikTok influencer and high school teacher Xavier Watso.

“I’m really lucky to be able to be the host for this event,” said Watso, who is Abenaki from Odanak. “To share our culture with a broad audience, that is really exciting to me.”

Along with the movies and musical acts that will be featured, Kahnawake-specific content and contributions were also revealed.

Kahnawake at the festival

The First Peoples Festival will be coming to Kahnawake on August 15 with a special screening of works by (mostly Kahnawa’kehró:non) filmmakers Brooke Rice, Nicolas Renaud, Roxann Whitebean and Courtney Montour.

At 6 p.m. that Monday at the Legion Hall, community members will be able to gather for a series of short films, including Whitebean’s recently-released Rose, inspired by the Sixties Scoop, and Rice’s ó:nen í:ke’s.

“I’m really excited that we were included,” said Whitebean of her short film. “I’m very proud of the cast and crew for many reasons. The film is 30 minutes long and we had to work through COVID protocols, which made things a little more difficult than usual. And we had a few days with a crew of 15 people to pull this all together, but we made it happen and I’m really proud of the outcome.”

It will be shown three times in the festival: on the opening night, August 9, then again during the programming on August 12, and finishing off at the Legion on the 15th.

“I’m very pleased with the outcome and what (Passion has) done. I think that she has a really bright acting future ahead of her,” said Whitebean.

The story is a personal one in Whitebean’s heritage, so she took great care to ensure her family was on board with the production. Parts of it were shot in Kahnawake including at the St. Francis Xavier Mission Catholic Church, but she emphasized that though it is inspired by a true story, it being filmed in the church does not mean that the church was involved in the true proceedings.

“Montreal First Peoples festival is a local festival and one that has been supporting my career for several years now,” she continued. “It’s something that I’ll always be grateful for because it’s really great exposure for the cast.”

Montour will also be giving a masterclass on filmmaking as part of the festival, as will Kanehsata’kehró:non Sonia Bonspille-Boileau.

“We start and end with short features, because we want to honour the work of the youth – and that’s the time for discovery,” said Dudemaine.

Take Bonspille-Boileau, whose most recent production is the CBC/Radio-Canada TV miniseries “Pour toi Flora.” She is now giving a masterclass in the festival as a successful filmmaker, but Dudemaine pointed out that her first short film was featured in the festival 10 years ago.

“It’s an important moment to discover new talent, just like the work of the young artists in residence that will be seen on the walls of the Grande Bibliotheque,” said Dudemaine.

Indeed, two young First Nations artists will have access to the BAnQ’s archives to create artworks that will be projected onto the front of the building during the festival. Kiana Cross of Kahnawake is one of the two artists.

Cross, aka DJ Poptrt, expressed her excitement at the opportunity to be part of this artist residency.

“For me, visual art and seeing a lot of the projections that are all over the buildings around Montreal has kind of been a passion of mine, and it’s always been a goal of mine to do something like that,” she said. “Having my art projected on this massive, iconic building is really something I’m looking forward to.”

She described her art as colourful and abstract, which in the multimedia video she will be creating will be mixed with the archive content from the library.

The other artist in residence is Lydia Mestokosho-Paradis, from the Innu community of Mingan. The two artists’ works will be displayed throughout the festival, alternating between the two.

Mestokosho-Paradis’ work is usually made up of drawings, wood sculptures or embroidery, and this is her first video montage, which she said is nerve-wracking but exciting.

“I’m excited to see the photo archives, and to try and find photos of my ancestors and my community,” she said. “I just want to pay homage to their work and to thank them for passing on their culture.

“I am a proud Innu woman and I’m happy to be here in Montreal, on your territory,” she said, referring to the Kanien’kehá:ka and Haudenosaunee. “Thank you for having me here; I’m excited to exchange and collaborate.”

Rounding out Kahnawake’s participation, local artisans Martin Loft and Sedalia Kawennotas Fazio will also be on the festival grounds to sell their work, along with many other Indigenous creators.

At Place des Festivals, attendees can take advantage of a full schedule of performances, with laidback singing and dancing events during the day and bigger, headlining acts at night.

It all kicks off on August 10 with Beatrice Deer, the Inuit/Mohawk “inuindie” singer. Her latest album SHIFTING was released to critical acclaim in October 2021, so this show presents an opportunity to hear accomplished new work sung in Inuktitut from an artist with direct ties to Kahnawake.

Another act with a connection to town is Digging Roots, the Juno award-winning duo consisting of Raven Kanatakta and his wife ShoShona. They will be on the stage August 12.

The more casual daytime programming will be offered from August 10 to 15, and some Mohawk singing and dancing can be seen during these events. There is also theatre and circus to catch on those days, notably with the Inuit circus troupe Tupik ACT.

As for the cinema, attendees have broad selection of films to choose from coming from all over, many of which are Canadian or Montreal premieres.

Some that are particularly relevant to Kahnawa’kehró:non are Whitebean’s Mary Two-Axe Earley: I Am Indian Again, and Rotinonhsión:ni Ironworkers Created by Allen Downey and Carlee Kawinehta Loft.

The full programming is available in French at presenceautochtone.ca.

From Turtle Island to a Greek tragedy