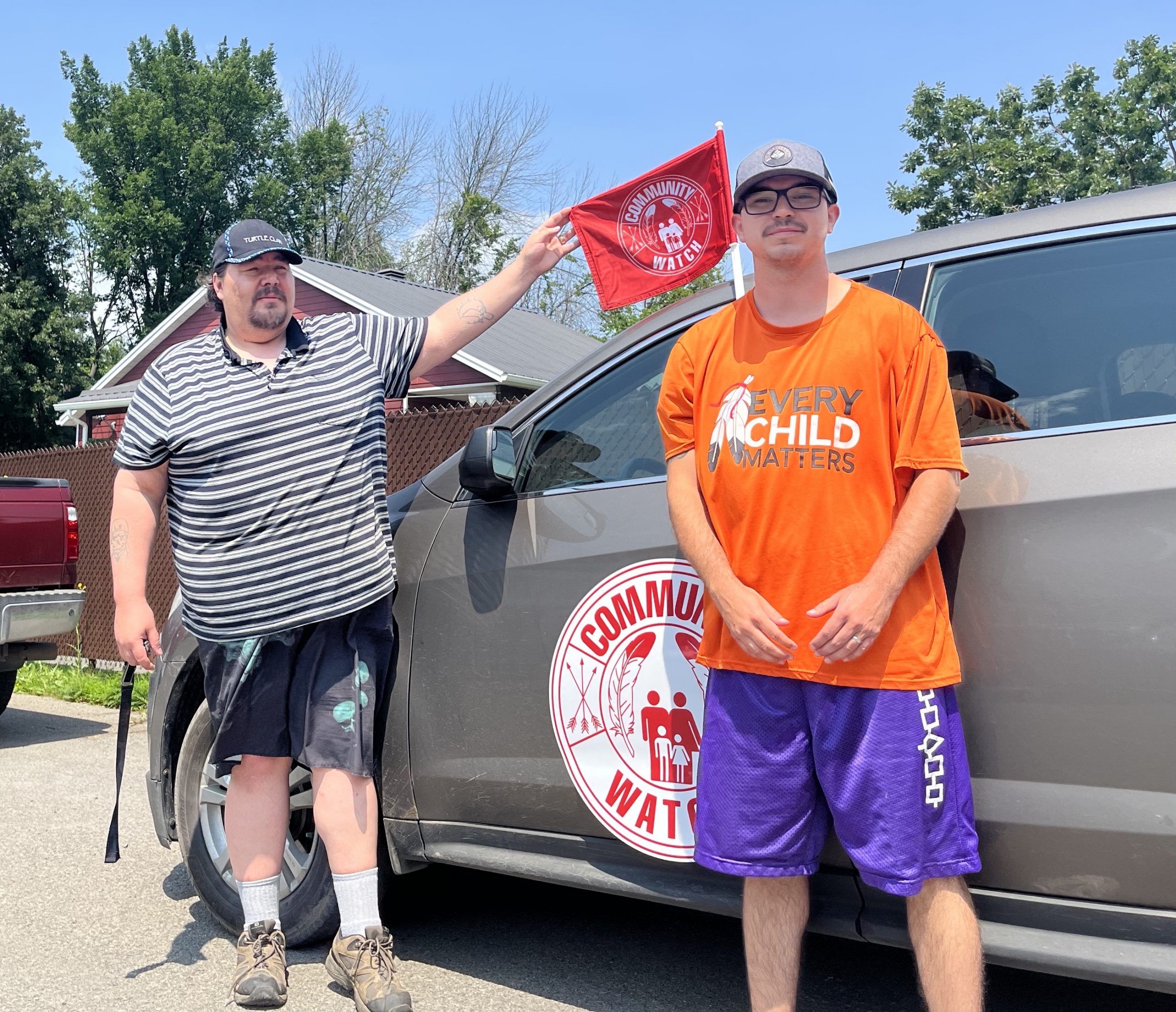 No matter the price of gas, at 6 p.m. Jeremiah Johnson gets in his car and goes for a drive. He won’t be home for three hours.

He doesn’t go far, mind you – he’s cruising the quiet streets of Kahnawake, his eyes peeled for anything out of the ordinary. It could be someone who’s lost, someone who needs help, a delivery person idling in a driveway.

It could be a turtle crossing the road. Johnson’s seen it. He pulled over and helped the turtle.

“Community Watch can be anything,” he said. There’s one concern above all, however: it could be someone up to no good.

Like Kahnawake Community Watch’s other 25 or so volunteers, Johnson is motivated by a desire to keep his fellow Kahnawa’kehró:non safe. The organization, founded by Frank Whitebean, is coming up on a year of pursuing this goal.

“The backbone inspiration of this is to make a stand for Every Child Matters and missing and murdered Indigenous women,” said Whitebean.

It all began last summer, shortly after a July 1 parade in support of Every Child Matters.

A flurry of reports surfaced of suspicious behaviour in Kahnawake. Whitebean learned of an incident close to his home, where he raises his own children, and it convinced him of the need to take action.

An 11-year-old girl was picking flowers in the New Development when she noticed the same unknown car pass three times, slowly. The girl hid in the bush. It terrified her when the car stopped, and a stranger got out.

The stranger looked in her direction. Time passed. They got back in their car and left. The girl ran home.

Her mother posted about what happened on social media, inspiring Whitebean to start a neighbourhood watch.

The incident also prompted him to start a petition asking the Mohawk Council of Kahnawake (MCK) to erect a checkpoint at the border of Lot 106 and for two vehicles to do a nightly patrol of town. It garnered over 400 signatures in four days.

“That petition prompted the grand chief to ask me to organize a men’s meeting, which we did,” said Ryan Montour, lead MCK portfolio chief for public safety and a Community Watch volunteer himself.

“I’ve been one of the main supporters of Frank and his movement to basically raise awareness and make a stand for Every Child Matters,” said Montour. “I’m always a firm believer of action that speaks louder than words.”

Around July 24, 2021, the date the group has settled on as its official anniversary, a community-wide watch was established.

A testament to the influence of the organization, the Community Watch Facebook group has grown into one of the community’s largest, with more than 1,500 members.

While there are currently no concrete plans to absorb the Community Watch into the MCK or even to provide funding, the group has won the support of Kahnawake’s institutions, receiving a public statement of support from the MCK and the Kahnawake Peacekeepers.

A year on, the Peacekeepers continue to support the initiative. “It’s a big asset,” said Peacekeepers spokesperson Kyle Zachary. “The more eyes we have out there feeding us information, the more effective we can be as a police service.”

The Peacekeepers provided guidelines to Community Watch after issues arose in which patrollers overstepped. Patrollers now have identifying stickers or flags, they pass background checks, and, most importantly, agree to follow the rules.

“Initially, when they first started to patrol the territory, there were a few instances where they were intercepting vehicles, and we had to remind them that they don’t have the authority to do that,” said Zachary.

Once the organization received the guidelines, the growing pains ceased, according to Zachary and Montour, who emphasized that members have been instructed to observe and report only to prevent vigilantism.

“Our job as Community Watch is not to replace the Peacekeepers or to interfere or to become Peacekeepers ourselves,” said Johnson. “We’re the eyes and the ears, the extension of local law enforcement to complement the job that they do already.”

He noted the organization aspires to be an inspiration to the community, not a liability.

The organization has been well received by every day Kahnawa’kehró:non. Some have expressed their support by donating money or making other contributions.

“What motivated me to donate is 11 grandchildren and two great-grandchildren, along with all the other children in the community,” said John “Six-Footer” McComber.

“The organization has made the community safer by patrolling the streets by car as well as parking at playgrounds and sports fields around town,” he said. He believes even simply posting signs boasting of a community watch in town plays a role.

“It’s a great organization. Town definitely needed something like this,” said Brittany Lahache, who owns a decal business. She spent about a week making 100 vinyl stickers that patrollers use to help identify themselves.

“I’ve seen posts where people were followed home, strangers watching kids play. You never know what someone will do,” said Lahache. “With Community Watch, at least there’s people around because the PKs aren’t always available right away.”

The organization is hoping to expand its footprint and recruit even more Kahnawa’kehró:non to participate.

Whitebean emphasized that people don’t have to be formal members to keep an eye out in the community and report anything suspicious.

“We’re all family in this community,” said Johnson. “Whether we’re related by blood or not, these are all my brothers and my sisters and my uncles, and we have to watch out for our whole family because this is our home – this is our house.”

Organic farmers dish the dirt and dig in the soil

Give your feet a warm hug this holiday season