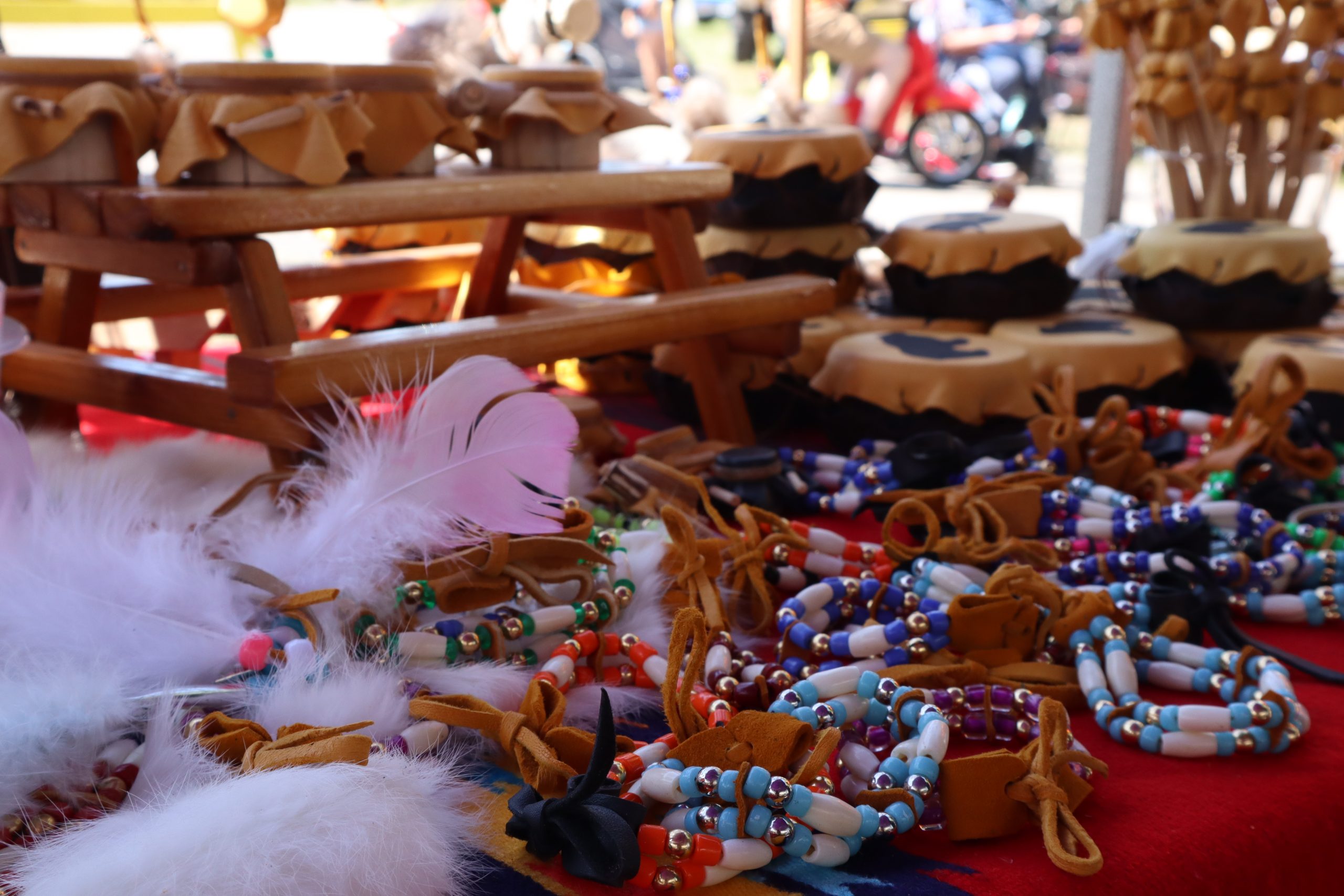 Kahnawa’kehró:non and guests celebrated the 30th anniversary of the Echoes of a Proud Nation Pow Wow last weekend, after a two-year hiatus due to the pandemic. The powwow grounds filled with singers, dancers, artists and cooks who gave their gifts to thousands in attendance including Ian Lafrenière, Quebec’s minister for Indigenous Affairs.

“The people are so nice. So different, so nice,” said Brenda Secord, a craft vendor from Six Nations who attended the Powwow. “Some places you go and they’re kind of standoffish. Not here. That’s what I like about this place. That’s why I keep coming back.”

Secord has been returning to the Echoes of a Proud Nation Pow Wow for the last 10 years to put forward her crafts, dubbed “a family tradition.”

Secord was one among 78 vendors in attendance this year, with booths adorned with handmade crafts, fresh picked medicines, and traditional foods, along with 26 food vendors who served powwow staples like Indian tacos and frybread, strawberry juice, and walleye nuggets.

“This year we had a longer waiting list. We had people trying to get in a long time ago,” said Lynne Norton, a powwow committee member who helped organize the event. “We probably had about a 15-person booth waiting list. Usually we have maybe one or two. After a while, we weren’t taking names anymore.”

With so much enthusiasm and public interest, the powwow committee decided to prioritize Kahnawa’kehró:non who applied for a booth with the vendors.

“Townspeople from Kahnawake, they get to the top of the list because this is their community and they should all be able to sell their stuff here,” said Norton. “So every craft vendor that requested this year from town got in.”

Kahtehrón:ni Iris Stacey of Kaienthókwen was one such vendor. Along with Eugene Jacobs, Stacey has spent the last year-and-a-half developing her business that makes traditional foods like corn, squash, and beans accessible in Kahnawake.

“We want to showcase traditional and non-traditional foods from Indigenous people, from across North America,” said the Kahnawa’kehró:non. “We want to make these types of foods available to our community.”

The booth was decorated with braided Allegheny popcorn, Mohawk red corn, Tuscarora white corn, and Hopi blue corn, which hung in the corners and introduced their produce to guests. They hoped their presence at the powwow would help to spread the word about saving seeds and sharing food.

“We don’t only sell the corn. We give it to the Longhouse, to the schools. So that’s how we started off, just planting a lot and then donating, teaching in the schools,” Stacey noted.

Vendors came to tell stories and share knowledge along with their crafts. At the Akwesasne Healing Arts booth, guests were welcomed with the smell of freshly picked sweetgrass hanging from the tent.

“It’s in season right now, so to come here when I could be out in the fields picking, it’s a choice,” said Virginia Jacobs. “I want to be there, and I want to be here.”

Jacobs put forward bundles as well as clean-picked, braided sweetgrass that she harvested two days earlier in the mountains. Along with the medicine, Jacobs shared her protocols.

“Sweetgrass is the hair of Mother Earth, so I have to really respect it. You pick it when the lightning bugs are out,” said the Ahkhwesahsró:non. “Once those seeds are fallen, that’s when we can pick, because we know that we’re not killing the grass, the seeds, and we braid it.

“We put our prayers into it (sweetgrass). Like, ‘I hope I have good days, good family, nothing happens with us today.’ Then you could hang that up by your door for positivity and calmness.”

There is significance to all of the crafts in Jacobs’ booth. One broach she made in beadwork is a red dress with black trimming to represent the missing women, and a hanging ornament with orange beads and a black trim represents the missing children.

The healing that comes from creating art is central to her work, which is only strengthened by opportunities to share them with others.

“With all the work that you put into beadwork, and when somebody picks up a pair of earrings and just loves them,” she continued, “it’s just a good feeling.”

The good feelings extended to the thousands of people who came to share in the celebration, sing and dance together, and ultimately heal.

“I have no idea where the hell all these people came from,” said Norton. “Everybody was just getting out of pandemic mode. They just needed to go somewhere.”

“It’s refreshing to see people, and people walking around and talking to each other, instead of being so scared of one another,” Secord noted.

“There’s a lot of people that revolve their vacations around this, to come and see family at this time,” said Norton.

More than 30 years after the first Echoes of a Proud Nation Pow Wow, it continues to serve its purpose, strengthening ties between communities, taking pride in Onkwehón:we cultures, and celebrating and having fun.

Surviving without an iPhone? It is possible