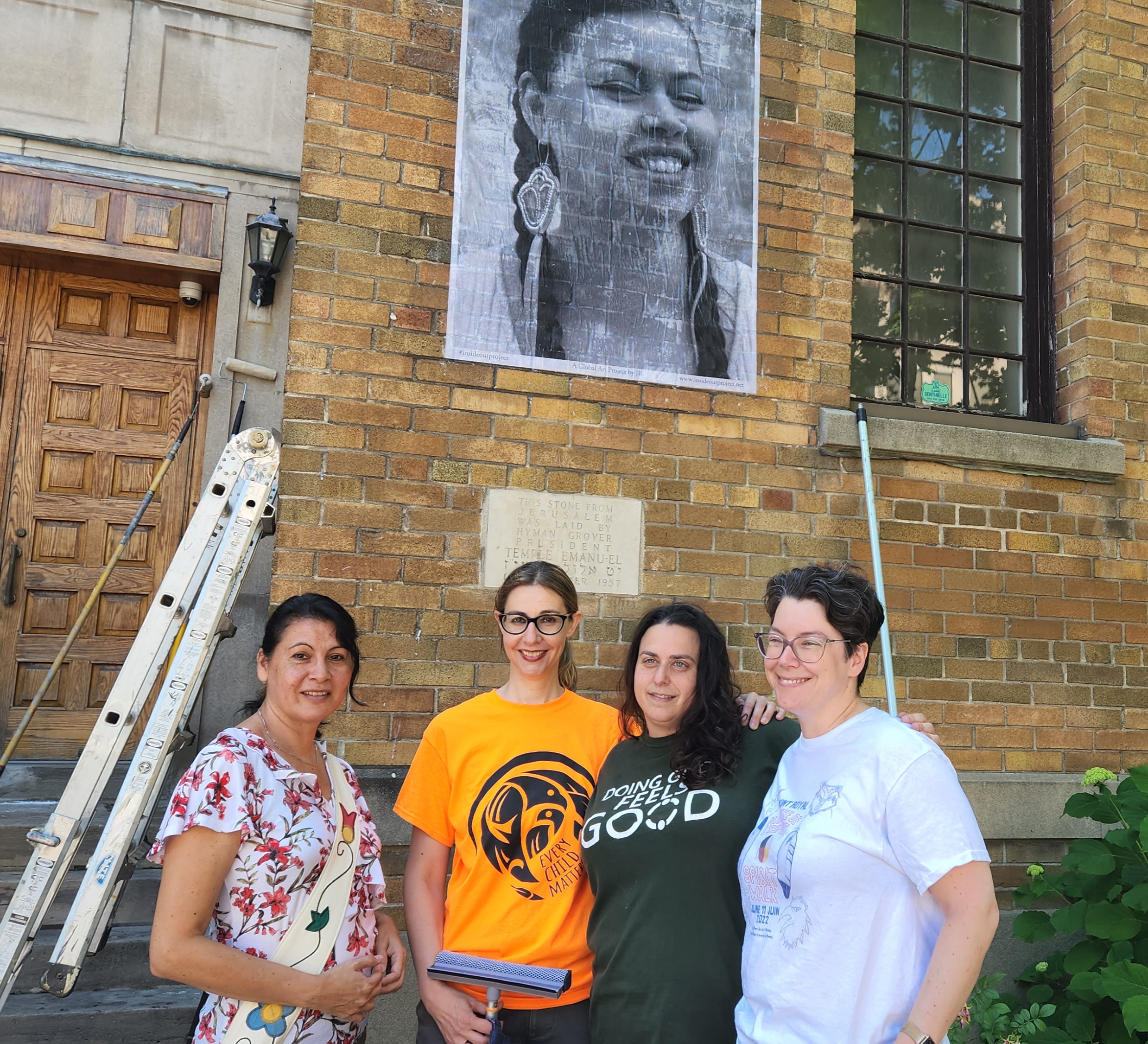 An art project that saw 50 Indigenous portraits installed around Montreal – with a third of them depicting Kahnawa’kehró:non – was completed last weekend as the final portraits were installed at Concordia University and the Temple EmanuEl-Beth Sholom synagogue.

The installation, called Indigenous Forced Displacement, features photos from three photographers, including Kahnawake’s Martin Akwiranoron Loft. They are put up in various locations around the city.

Realized through the worldwide photo-activism project Inside Out, Indigenous Forced Displacement highlights the local Indigenous community in and around Montreal and the severance from their homelands all endured and continue to endure.

“You can’t just sort of turn away and go along with your day and pretend like we don’t exist,” the project’s lead, Nakuset, told The Eastern Door about her intention with the portraits. “We are still here, despite smallpox blankets and all this systemic discrimination.”

On Sunday, June 26, a team of people put up three posters at the Temple Emanu-El-Beth Sholom, while another team put up the final nine at Concordia University’s FOFA gallery.

“It went great. We had such great weather for it,” said Jordana Vamos, a member of the temple’s board of directors. “It was very communal. It was very helpful. Everyone tried to pitch in. There were like more hands wanting to do jobs than there were jobs,” she said with a laugh.

Many of the attendees who came to help out were from the congregation.

It was Vamos who connected Nakuset and the synagogue to talk about installing some of the portraits on the building at 4100 Sherbrooke Street W – and she happens to be Nakuset’s cousin.

“It is a way of lending our space and sharing our space with the project and the initiative. We were happy to do it, and I’m glad to see the synagogue agreed to do it because it’s a nice, very public expression,” said Sarah Sookman, who heads the synagogue’s Truth and Reconciliation committee.

“It’s a very busy area, and people are going to go by, and they’re going to see those portraits.”

The temple also opted to put up a banner explaining the project so people walking by would know what the portraits are there to do: “have Indigenous presence be felt a little bit more, have it a little bit more solid, physically, actually on the building itself,” said Sookman.

Jacky Vallée was also at the installation, helping to put up the portraits at Concordia.

“These beautiful pictures honour and celebrate the resilience of Indigenous people in the area,” said Vallée. “This project contributes to healing and pride among the urban Indigenous community and in Kahnawake, and more awareness among non-Indigenous people.

“Despite centuries of attempted genocide, Indigenous people are still standing. As a settler, it’s a moral obligation and an honour for me to support Indigenous-led projects like this that contribute to cultural healing on so many levels,” he concluded.

At the Temple EmanuEl-Beth Sholom, initiatives to strengthen ties with Indigenous communities and promote reconciliation have been organized for a few years now. But after the findings of the unmarked graves last year, the temple formed its Truth and Reconciliation committee and doubled down on its efforts.

“We’re trying to build relationships with the community and show that we are very serious about this work,” said Sookman. “There are a lot of very passionate and dedicated people on our committee.”

“This is now part of our culture at the synagogue, is to do our best to support people in our community that need it, who have been pushed to the margins and made invisible,” Vamos said.

Both women referred to the genocide and exile that marks Jewish history as a point in common with Indigenous Peoples, saying that it speaks to the necessity for Jewish people to demonstrate their solidarity.

“Our ancestors came here as immigrants and refugees, looking for safety. But it’s very clear to us, and we acknowledge this, that security and safety and acceptance has been denied to the Indigenous Peoples of this land for centuries,” she continued.

“Coming here and knowing we’re on unceded land, for a lot of us, is really uncomfortable,” said Vamos.

But on Sunday, there was only room for cooperation and collaboration.

“It was just a really nice morning, feeling like we’re actually doing reconciliation instead of just talking about it,” Vamos said.

“It would be wonderful to expand our activities just beyond our synagogue and to the broader Jewish community,” Sookman noted.

“We’ve got very lofty ideals and hopes. But, you know, it is one day at a time.”

A few surprises at Akwesasne Powwow

Treuer: an author to push to top of the list