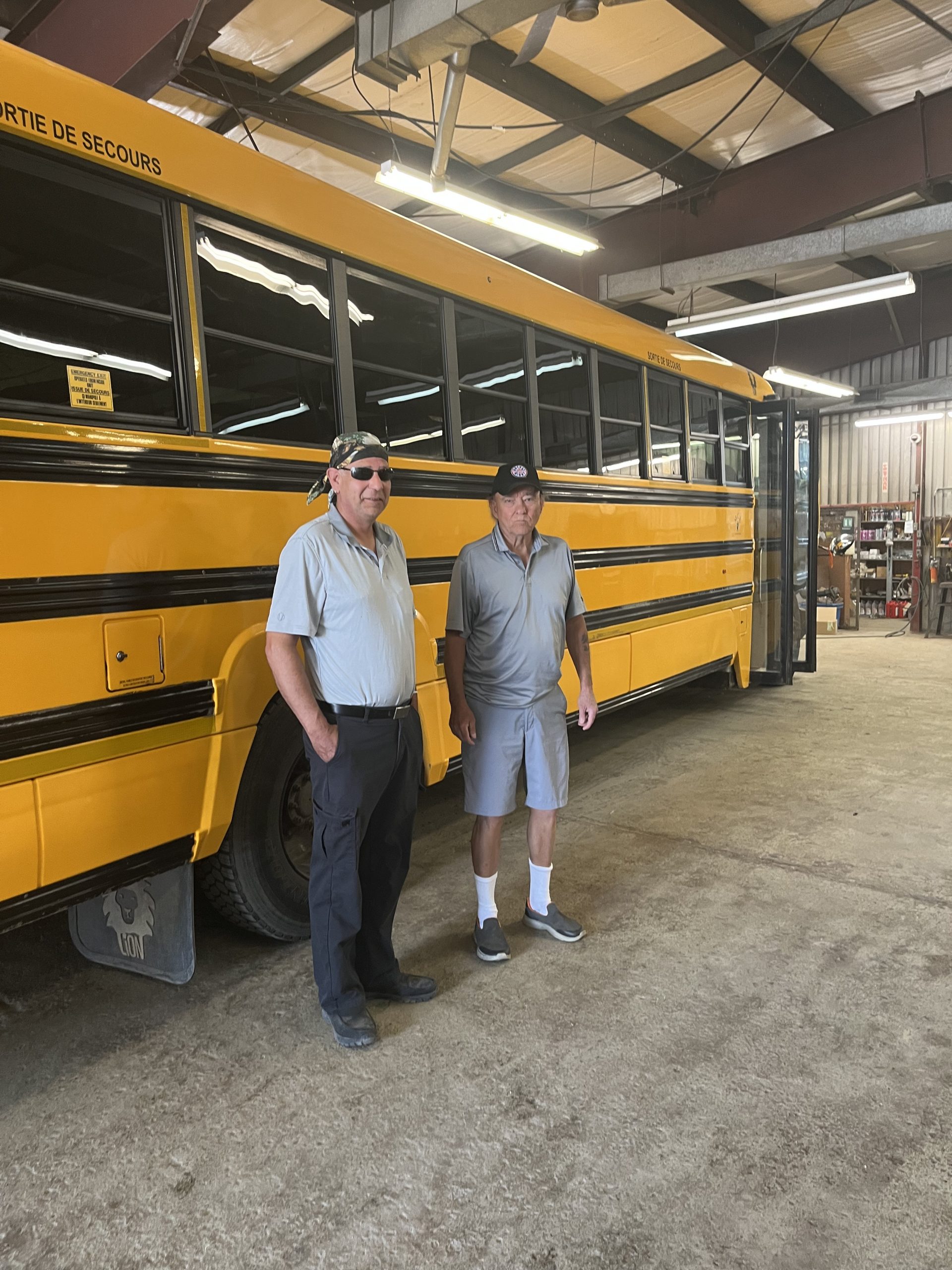 When Jodie Gilbert’s daughter, Mia Delisle, started at Kateri School, the two would wait together at the bus stop.

Like many children, Delisle wanted to be more independent as she got older, and by sixth grade she insisted on waiting alone. After all, she didn’t need any help getting up or getting ready.

Gilbert understood. She watched from the window instead.

Parents are used to worrying, but Gilbert took solace in knowing that once her daughter, now 12, stepped through the open doors of the yellow bus, she was in good hands.

“I was completely reassured knowing she was in the excellent care of Carl (Gilbert) and Jeannie (Monick),” she said of the driver and bus monitor team.

Kahnawake’s 25 bus drivers have always had an important job ferrying the community’s children to schools inside and outside the community. It’s not easy – they have to keep their cool as they navigate tight turns, impatient drivers, and rambunctious children, all while balancing a stack of school schedules.

That’s in normal times; imagine what it’s like during a pandemic.

For a full school year, each bus could operate at only 25 percent capacity, carrying 12 children instead of 48. This past year, that number was raised to 24, which remains the maximum in an effort to ensure social distancing as COVID-19 lingers.

William Meloche, 71, has been driving school buses in town for nearly 40 years, and he has never seen an era like this one. At the height of the restrictions, he was doing eight runs to get the community’s children to and from school.

“Basically, you were hired to do a job and get these kids to school, and yes they made it difficult by going down to 12, but it was essential,” he said.

Now that the capacity has been raised to 24, he is doing six runs a day, but it’s still not easy.

“This year, there wasn’t a day where we didn’t change something. A lot of times, I ended up having to drive,” said Spencer McComber, daily transportation manager at the Mohawk Council of Kahnawake since 2019. For more than 10 years before that, he was a school bus driver.

It’s his job to ensure the buses are running smoothly. This year was plagued by breakdowns and staffing shortages when drivers would have to take time off to recover from COVID-19.

Because of scheduling, the department has had a particularly difficult time getting kids to and from Howard S. Billings High School on time.

He’s had to field emails from the principal, but he said he’s only making due with the circumstances he’s got.

“We didn’t really have a choice. It’s either they show up a few minutes late or they don’t go at all,” he said.

He plans to send a formal letter to Council to ask that the 50 percent capacity restriction be lifted in time for the new school year in September. Otherwise, he said, the buses – and students – will face the same issues.

Although the job has been hard, not one bus driver in Kahnawake quit during the pandemic.

“I think it’s loyalty to the community,” said Meloche. “The children of Kahnawake have to go to school.”

He appreciates that McComber has not been reluctant to drive the bus, as some bosses might have been.

“He jumped in there and threw his hat in the ring,” said Meloche. “Everybody who worked together, nobody backed down, nobody quit. Was it tough at times? Yes. It’s not a piece of cake. Teachers want the children at school. There’s a schedule. But bear with us. That schedule’s going to get a little wacky.”

The bus drivers have shown loyalty to the community in other ways, too. In winter, McComber and another driver answered the call to pick up 2,500 pounds of potatoes in Akwesasne to be distributed free to Kahnawa’kehró:non.

Some of the bus drivers have also made time to deliver food for the Kateri Food Basket, using their own vehicles. Meloche did so for 16 months.

“For me, it was sort of like giving something back,” he said.

Meloche’s approach to the job hasn’t changed much since he started. “In my point of view, if you can get the children to be your friend … it makes things a lot easier rather than being a dictator,” he said.

“You might get one or two that want to show off for their friends and that. That might take a little time,” he said.

This is not far off from the approach taken by Carl Gilbert, a driver since 2015.

“You just talk to the kids, and they come around,” he said. “They get to know you a little bit. You just talk one-on-one. These kids aren’t bad; they’re just having a bad day.”

There’s nothing he can do about the cars on the road, however – it’s a regular occurrence that other vehicles will tailgate the bus or pass the flashing stop sign when kids are boarding.

“The kids, their expressions when they’re having good times at school, they’ll come and they’ll tell you about it and their accomplishments, especially the little ones,” he said.

Sometimes he’ll joke around with them a little, saying have a good weekend on a Monday or see you tomorrow on a Friday.

Some children have even brought gifts aboard around the winter holidays, such as gift cards or even a sign with Trans Ams on it, a nod to his passion for old Pontiacs.

That doesn’t mean the kids think they’ll get away with pushing or shoving or pulling off their masks while aboard, however.

“I run a pretty tight bus.”

Toys for every girl and boy’s Christmas wish list