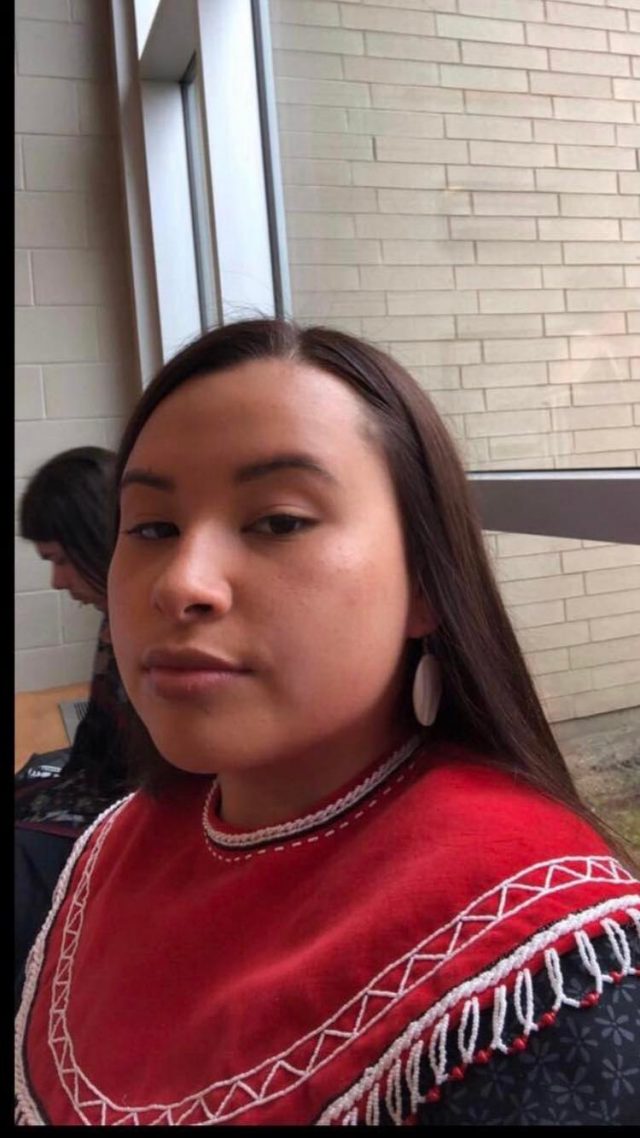 “As a kid, I always wanted to be fluent in my family’s language,” said Tekahnekake Stacey, an upcoming graduate of the Kanien’kéha Ratiwennahní:rats Adult Immersion Program run by the Kanien’kehá:ka Onkwawén:- na Raotitióhkwa Language and Cultural Center.

“I looked up to people in my family that were fluent, and I was discouraged when I couldn’t understand people at ceremonies.”

Since she was young, Stacey picked up a few words from different family members. But it was when she transferred to Kahnawake Survival School (KSS) from a high school in Chateauguay that Stacey was inspired to better practice Mohawk culture and language.

“French people are fluent in their language, and Chinese people are fluent in their language – how can we not speak fluently like that? Why do we only know one or two words?” said Stacey. “I was shocked to learn about our history, real history, and not the French history that makes us look bad. Once I attended KSS, that really opened my mind and the importance of learning our culture.”

Her connection to her language was severed when Stacey’s grandmother, who was a Kanien’kéha teacher, attended Indian day school and, like many others, was not allowed to teach or speak her language between friends and family at school.

“It’s like a part of me was missing, and I finally filled it.”

But the two-year program, which stretched to three years due to setbacks during the pandemic, has been a difficult journey of healing and strength for Stacey.

At age 14, Stacey was diagnosed with cancer in her pituitary gland, which put her on medication and led to two surgeries so far, with one being during her recent studies.

While the four recent tumours that have re-appeared are benign, the illness has weakened her immune system and affected her wellbeing over the years.

“I fought COVID three times since January (of this year),” said Stacey.

Each diagnosis meant she had to stay home two to three weeks at a time to recover, leaving her behind in the program.

“It was really hard to have to deal with that. It was a really big discouragement,” said Stacey. “As soon as I got back, I put my head in the books and kept up with everybody.”

During 15-minute work breaks, while other colleagues would chat or scroll on their phones, Stacey was studying, determined to excel in class.

“I think it’s probably one of the greatest gifts that I’ve received – that I’ve been able to learn the language… a lot of healing through learning, and it just had positive effects on me.”

Along with health concerns, Stacey has also faced loss. Since 2019, the year the program began, she has seen the passing of both her cousin, Trevor Montour, and her father.

“It takes its toll on me. I was in a deep depression, and I looked at life so negatively, and I could not see the positive,” she shared.

“After losing my father and others, I said, ‘I can’t do this anymore. I need to look at the positive…’ I have my family. I have my friends. I’m in school. I have my outlook on life and many goals that I want to succeed.”

In honour of her loved ones, Stacey strived to finish the program and succeed in speaking Kanien’kéha.

“I wouldn’t give up for Trevor, and I dedicated (my graduation) to my great-grandmother and great aunt that also has passed, and were fluent speakers, and were also somebody who I looked up to,” said Stacey.

“My mother (Martyann) – I wanted to mention how lucky I am to have her by my side. She is always so encouraging to my success and health, and at times where I wanted to give up, she always kept me on my feet.”

Along with her mom, her great aunt, Elva McComber, who helped care for her during sickness, and her great grandmother Margaret Thomas, who helped her learn new Mohawk words, Stacey also had amazing support from the community. Community members lit tobacco for her when she underwent brain surgeries and encouraged her learning.

Through this path, Stacey has strengthened her spirituality through language, praying in gratitude to the Creator in the mornings and evenings. With her advanced fluency in Kanien’kéha, Stacey was able to perform the second ceremony of the death feast to honour her father Keron Canadian, which occurred during COVID when increased health safety restrictions were in place, and few individuals could attend.

“During COVID, we didn’t have anybody (that was able to come), so I took it upon myself to hold the ceremony,“ said Stacey.

The first death feast ceremony is held 10 days after the one has passed, and the second ceremony occurs on the anniversary of their death to officially send them off into the Spirit world.

“I felt really honoured, especially because I did it for my father,” said Stacey. “It was emotional, but I was really happy to do it.”

She hopes to become a language teacher in the future to accomplish her ultimate goal of passing on the language to other community members.

The 2019 graduating cohort, totalling a little over 10 students, graduated on June 8 in a ceremony at the Kanien’kehá:ka Nation at Kahnawake Longhouse.

“I never thought I would get this far in learning Kanien’keha. Hopefully, in the future, my goal is becoming fluent and becoming a Kanien’keha teacher in the community,” said Stacey.