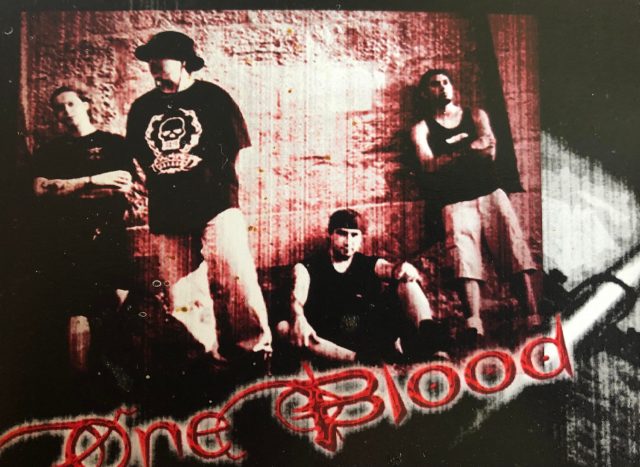 In the mid-2000s, when the most interesting thing on most cell phones was the game “Snake,” there was a heavy metal show nearly every weekend around Kahnawake.

One Blood – led by singer and bass player Adam Shoniatariiá:kon Cross – was a premier attraction on the local scene. But as happens to countless musicians, their priorities shifted. They started families. They got jobs.

Cross left the band in 2006 to become an ironworker, and the group fizzled out a couple of months later. He would propose a reunion every couple of years, but since 2009 the group was never able to put one together.

“As long as the original members of this band were alive, there was always this possibility of getting together and having a jam, but it just never happened,” said Michael Montour, a guitarist in the heavy metal group.

“I’m not going to lie; it was hard. The first couple weeks after he passed, I couldn’t get those memories out of my head,” he said. “To go back and pay tribute to that, that’s really the only thing I could think of. Putting that into words, it’s not that easy.”

Montour and the band’s original drummer, Brady Cross, started jamming late last summer, quickly picking up the old songs. In the fall, they started to recruit other musicians who had played with Cross in different contexts to join them under the One Blood banner.

This weekend, the lineup will headline “A Metallic Tribute to an Iron Legend,” a concert in memory of Cross. It will be the first One Blood show since the band played twice in 2009.

The concert will be attended by members of Cross’s family. “He had a strong love for his family and his music,” said Samantha Iawentas Cross, his sister.

“My parents are happy that his bandmates put something together for him. It’s really nice to see the impact he had that they are doing this for him.”

She remembers the passion with which her brother would talk about the art form, how he would say he would have liked to make a career out of it.

“He had a lot of passion for playing his guitar,” she said. “Ever since we were younger, he would always be playing in the basement. We would go watch him play at Club Soda or the other venues. There were so many fans from our community.”

Mike Jacco, one such fan, remembers when One Blood competed in a battle of the bands at Club Soda, a venue with standing room for 900. The band packed a rented school bus full of Kahnawa’kehró:non who wanted to come out and support them.

“It was a pretty crazy and raucous ride to the show, and coming back was something to experience,” Jacco said.

Even ordinary shows proved memorable. “It was like an event when they played,” Jacco said.

He remembers Cross not only as a great frontman but also as a generous person off the stage. Jacco owned a camcorder, so he often took it upon himself to film some of the local bands. “Back then, there were no modern cell phones,” he noted.

Cross knew the tapes did not come cheap, so he would always try to give Jacco a little money for the job. Jacco would decline, insisting that he was just doing it for fun.

“It just speaks to the kind of person that he was,” Jacco said.

“It’ll be nice to hear their music again, but it won’t be the same. They’re going to be missing a big part of the band.”

On this, Jacco will find no disagreement.

“He was a showman,” remembers Montour of Cross. “He was always into it, headbanging, whatever – 100 percent, every night. Any time we played a gig, he was always bang on.”

For most of Montour’s adult life, he has been more likely to hold a hockey stick than a guitar, but he has done his best to find the spark from those glory days.

“If he didn’t pass, maybe I would never have played again,” Montour said. “It sucks…. I wish I was able to do it with him, you know.”

The One Blood tribute lineup is Freddy Leblanc, Michael Montour, Marshall McComber, Kevin Lahache, and Brady Cross. The band will be joined by DUMPTRUK, Ióhseres, and Such a Thing.