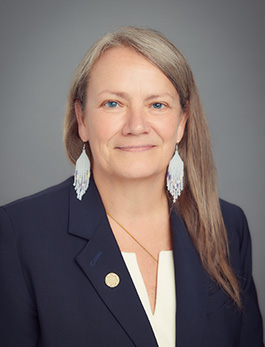 Over the past year, Kimberly Murray has been working with survivors of the Mohawk Institute – the longest operating residential school in Canada, searching for unmarked graves.

And now, she begins the gruelling work of taking the search across Canada. Last week, minister of Justice and attorney general of Canada David Lametti named Murray as the special interlocutor for missing children and unmarked graves and burial sites associated with Indian residential schools.

“This is a massive responsibility and obviously thinking about how to get this done and wanting to connect and communicate with as many people as I can in the two years,” said Murray, who has ties to Kanesatake; her father is Ronald Murray and her grandparents’ Rene and Ruby Murray.

“And at the same time making sure that we deliver on the two reports that we have to do. I did not want to start this mandate off with a ‘not enough time, not enough money’ conversation. My intention is to get this done for the survivors.”

She explained that her new mandate is to continue her dialogue with First Nations, Inuit and Metis communities and survivors to identify their needs in relation to their search for unmarked graves and to facilitate communication with the federal government.

“Many have not started (the work) yet. Some have already started. So just really, speaking with them to find out about the challenges and barriers that they faced and are facing. And making those connections for them if they need the help. Who to go to for financial support, how to connect with the right technical expertise,” she said.

“And conversations around the burials are really important because the second part of my mandate is to review the provincial, territorial, and federal laws in relation to burials and how we can strengthen them and improve them so that they protect these grounds.”

Murray, who also served as the executive director of the Truth and Reconciliation Commission of Canada (TRC) from 2010 to 2015, explained that currently, there is no legislation in the country that protects and preserves unmarked burial sites.

She said that laws pertaining to access to information and the need for Indigenous data sovereignty must also be addressed.

“Like, why are all the records about our kids in our communities sitting in the colonial archive or in church databases? They should be in the hands of the communities,” said the special interlocutor.

As the executive of the TRC, Murray oversaw the team in charge of searching for names of the missing children and unmarked burial sites. She believes that her new role is a continuation of that work.

“The identification of unmarked graves and burial sites of Indigenous children at residential schools has caused us all to reflect on Canada’s history and the truth of this troubling past,” said Lametti.

“This work will be an important trust-building exercise that will help communities move forward, find healing for families and survivors, and push us all toward a more just framework for honouring the memory of Indigenous children who never returned home from residential schools.”

As the executive lead for the Survivors’ Secretariat established by Six Nations of the Grand River in 2021, Murray helped survivors set up the operation to search the six hundred acres of the Mohawk Institute.

“I got the ground-penetrating radar machines and training community members when we started to search. We were doing LIDAR search (light detection and ranging technology),” she said.

“The team was also able to get access to all of the archival records and got all the necessary agreements in place to facilitate the search. In addition, they were able to secure $12 million in funding so that survivors and the community could continue the crucial work.

“And we set up a non-profit organization, and the entire board are survivors of the Mohawk Institute,” added Murray.

The special interlocutor is now hard at work assembling a team and establishing a small administrative office. Moreover, she is also looking into setting up regional offices and hiring people from across the country.

She will also be working on creating a survival circle to inform her work as well as meeting with elected and traditional leadership.

“On behalf of the Tḱemlúps te Secwépemc, we are very pleased to learn of the appointment and mandate of Kimberly Murray to the position of special interlocutor for Canada in relation to unmarked burials,” said Kúkpi7 Rosanne Casimir.

“So many Indigenous communities across Canada are launching investigations into unmarked graves, and we exercise our inherent jurisdiction over those investigations. It will be painstaking, vitally important work – work that will take time and resources.”

As aforementioned, the special interlocutor will also need to produce two reports, the first after the first year describing her work and progress and a final report to be delivered at the end of two years.

According to the federal government, the work of the Special Interlocutor will be supported by a proposed investment in Budget 2022 of $10.4 million over two years.

“Before I took this job, I actually spoke to the leadership in Kanesatake because it was important to me. I contacted the grand chief (Victor Bonspille). I didn’t want to do the job if the community didn’t support me,” said Murray.

“Kanesatake supported me all through my law school career. I wanted to make sure that they were supportive of me now. They actually had a meeting and received full support from the grand chief and Council of Kanesatake.”