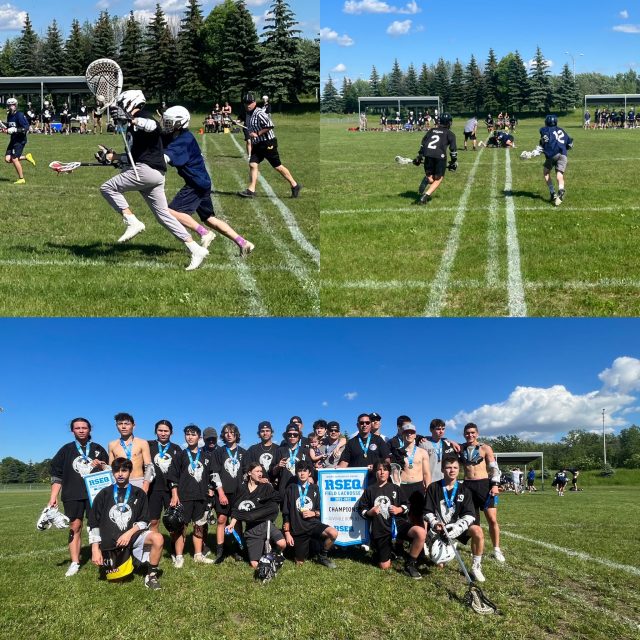 It was a moment years in the making for the team and one the players are not likely to forget. KSS beat out Kuper Academy’s Kodiaks 9-1 at the Kahnawake Sports Complex lacrosse field during last Friday’s championship game.

“I feel pretty good,” said Tehorakwaneken Gary Albany, who was named the most valuable player of the game.

“I have been waiting for this day since grade seven, and we finally did it, and I am just happy that everybody played hard, just all commitment, and we came up with what we wanted. We played hard.”

The first quarter started with a bang for KSS, with Albany on the offensive and the team holding possession of the ball. Two minutes into the game, the Muskies scored their first goal, bringing the score to 1-0.

Throughout the game, Kuper struggled to break out and had difficulty throughout the season in headto-head meetings with Survival.

“We are lucky to have so many talented players this year. You can’t say that there is one best player or two – it seems like they can all play equally well and play any position. We had a dominating season, and we are looking forward to a lot more.”

Kuper got the first penalty of the game, allowing the Muskies to take control and launch a counterattack, which led to the second goal of the match, bringing it to 2-0 for the Muskies. What followed was a couple of technical penalties for KSS with two men down, giving the Kodiaks a power play, but Albany made a solid save.

Then KSS scored two more goals bringing the game to 4-0. Survival has been incredibly successful this year, obliterating everyone in its path.

“It feels amazing! I have been a part of the team for the past six years. We won silver against Billings (Howard S. Billings Regional High School). That was the closest we have gotten to the championship in the past 16 years. We finally did it, and it feels great!” said Dickson.

Less than a minute into the second quarter, Survival scored again but simultaneously also got another penalty.

Then in the third quarter, the Kodiaks finally scored their first goal, bringing the score to 5-1. After another series of penalties for KSS, giving Kuper another two-man advantage, the Kodiaks fell short with another great save by Albany.

By the end of the third quarter, KSS was up 7-1, completely dominating the game and so close to gold. The Muskies kept pushing and added two more goals.

“The boys came out hot. All fire,” said assistant coach Kirby Joe Diabo after the game.

“We moved the ball real quick. Our defence was amazing. Our goalie played amazing, and we came up with a win. We put a lot of work into these kids,” said Diabo.

“Every game was a good showing. We put a lot of goals out. We have strong players, and we could not ask for anything more.