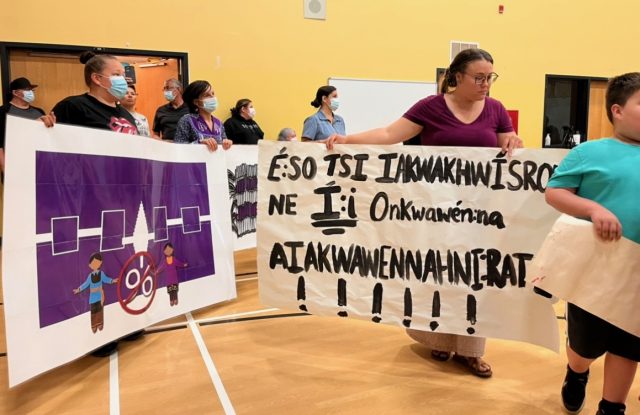 Outside, a downpour. Rain dampened a “day of action” against Bill 96 at Karonhianónhnha Tsi Ionterihwaienstáhkhwa, but the school community’s indignation could not be extinguished by a little water.

The Friday, May 27 event was moved to the gymnasium, where the school’s staff and some 230 students assembled for the first time since the pandemic struck more than two years ago.

“I think it made it that much more powerful,” said Katsi’tsahawe Splicer, a counsellor at the elementary school, which is home to a Kanien’kéha immersion program.

Youth have led the community’s opposition to the new French-language law in recent weeks. However, the day of action stood out for giving the community’s youngest a chance to have their say.

“It’s very inspiring to watch the kids light up and be able to use their voice and actually be heard,” said Splicer. “I think it promoted exactly what we were looking for, a reminder of why our school exists and what we’re fighting for and all the work our immersion teachers put in.”

Not only do Karonhianónhnha-aged students potentially face the brunt of the law as they grow up, but they are the ones on whom the revitalization of Kanien’kéha most depends.

Fittingly, the school’s students boasted Kanien’kéha posters they made to protest the law. Some even rose to make speeches in Kanien’kéha in an effort to rally the other students.

“There was nobody else speaking, so I decided I wanted to speak,” said nine-year-old Iotenharí:io Lahache, a fourth-grade student.

At first, she felt nervous, but she quickly steadied herself as she addressed her peers and teachers in her own words.

“We’re Mohawk people. (Legault) can’t take away our language,” she said of her motivation. “It’s okay to learn French, but it’s not our whole lives to learn French.”

Her mother, Sondra Karahkwenhá:wi Cross, is a third-grade teacher at the school, but she said the initiative to speak came from her daughter alone.

“I feel I’ve done my job as a parent to instill those values into her,” said Cross, who tries her best to speak Kanien’kéha at home despite not considering herself fluent.

“We’re really proud they chose these words themselves,” she said.

Lahache was not the only fourth-grade student to stand up and speak. Her friend Iehwatsirahnì:ra’ts Gilbert, 10, also had something to say.

“We need to address the situation, that they can’t take away our language and they can’t force us to learn French,” explained Gilbert.

She, too, felt shy as she began; she was shaking and could feel her heart beating as she spoke, but these feelings subsided as she became absorbed in her message.

“Bill 96 is very important to talk about,” she said.

While Cross acknowledged it can be challenging to speak to young children about a complex issue like Bill 96, she believes it is important not to shy away from communicating to the community’s youth the history and circumstances facing Kahnawa’kehró:non in a colonial Quebec.

“We have to be blunt about things. We’ve been through a lot. That’s why we’re a resilient people,” she said. “They need to know these honest truths about us and our people and our paths.”

She spoke about trying to balance educating children on the importance of putting Kanien’kéha first with trying not to sour them on learning French. The need to take a stand against further encroachment from colonial languages can make this difficult, however.

According to Robin Delaronde, director of the Kahnawake Education Center (KEC), the message is about choice.

“They speak English. We teach French,” Delaronde said. “We want them to know that all languages are important, but their language is one that’s dying, one that needs extra attention.”

In addition to making French more central to business and public services in Quebec, Bill 96 puts enrollment caps on English CEGEPs and dictates that students who attend the institutions must pass an additional three French courses.

Local educators fear these measures could compromise student success and could undermine Kanien’kéha due to an increased need for French proficiency.

Delaronde has vowed that KEC will protect efforts in local schools to fortify Kanien’kéha among students. She pointed out that the day of action was also observed with songs and posters at Kateri School, albeit in smaller groups.

“We affirm with them that their language is Kanien’kéha, and we have to work hard in whatever way we can to revitalize and learn that language. That is what makes us who we are as an Onkwehón:we people,” said Delaronde.

In addition to the young speakers, the Karonhianónhnha event featured a young men’s singing group that led the school in a stomp dance through the hallways. Two elders who used to work at the school, Otsitsaken:ra Charlie Patton and Ka’nahsohon Kevin Deer, were invited to speak.

“(Quebec) has a responsibility to sit down and talk to us as human beings, as people,” said Deer, who has been outspoken on the issue. “But their attitude is because they have power in numbers, that might is right.”

Deer, once the school’s principal, wore full regalia as he addressed the students, telling them the significance of the two-row wampum and carrying forward the language and dress of their ancestors.

“The underlying issue always is land and title to land and land ownership. The entire province of Quebec is all on unceded territory,” he said.

He pointed out that Montreal has acknowledged Tiohtià:ke as unceded Kanien’kehá:ka territory.

“If this is Mohawk territory, how can Legault all of a sudden say that this is going to apply?” Deer asked. “We’ve got to rise to the occasion and challenge it, and that is what’s all unfolding here now.”

Like others, he fears the law will impact the success rates of local students.

“And why?” he asked. “Because the provincial government feels their language is threatened? It’s not threatened, and it never will be because you can always go back to France and relearn it.

“What’s threatened is our languages, Aboriginal languages across this Turtle Island.”

The Mohawk Council of Kahnawake (MCK) announced last week that all business with the province is on hold until premier Francois Legault agrees to meet with Kahnawake to discuss the community’s concerns.

Quebec has maintained that misinformation and falsehoods about the bill are what drive opposition, including in First Nations communities. The provincial government ran a full-page advertisement in major newspapers including The Montreal Gazette this week to target purported falsehoods. The ad claimed the bill promotes French while preserving the rights of First Nations communities. The province continues to resist calls from these communities for an exemption.

For Indigenous leaders around the province, a lack of consultation is a core complaint about the bill.