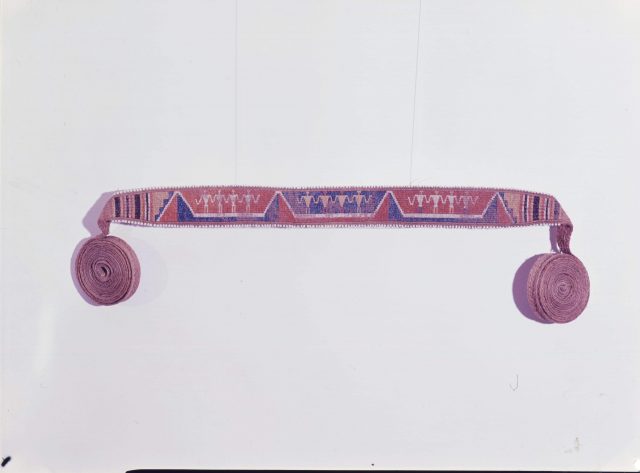 Last Thursday, Kanehsata’kehró:non got the opportunity to learn about Indigenous iconography and history during a presentation given by Jamie Jacobs, an expert on Haudenosaunee culture and history.

“I first saw Jamie Jacobs at a teaching here in Kanesatake years ago. It was so interesting,” said Gabriel.

“I wanted to organize something so more people could listen to Jamie. I believe he is very knowledgeable, and it is important to learn as much as we can about our language and culture so we don’t lose any of it.”

Jacobs, who is from the Tonawanda Seneca Nation and has worked at the Rochester Museum & Science Center (RMSC) for the past 16 years, said that he was more than happy to share his knowledge on the origins of Haudenosaunee contemporary designs.

“I showed objects from the museum and how they evolved to what we know today,” said Jacobs. The cultural expert explained that the RMSC has a unique collection of archeological material dating back to 4000 BCE and was excavated from known Seneca sites called proto-Iroquoian sites.

“I interpret those objects for our own people, stuff that just doesn’t exist anymore. Symbols that are etched or carved into bones and shells. Things that we just haven’t seen since then,” he said.

The format of the presentation followed a timeline so that participants could visualize the evolution and adaptation of Haudenosaunee designs.

“I pointed out things that happened in Haudenosaunee history that influenced the designs – even wampum belt designs. The wampum belt is actually based on a much older object that our people use to make that we don’t make anymore,” said Jacobs.

Jacobs also talked about how a lot of the older artifacts have mostly geometric designs. But as time went by, these designs changed to more contemporary objects like flowers and strawberries, as well as circular and semi-circular designs.

He said the evolution of the designs was caused by colonization and adaptation, among other reasons.

He said that his upbringing and the years he spent as a ceremonial speaker travelling to different Indigenous communities sparked his interest in Indigenous imagery and history.

“Probably about 10 years ago, I started doing traditional quillwork because what I came to learn was that porcupine quill beadwork and moose hair embroidery came before beads. So, I decided to try and bring it back,” said Jacobs.

“I started wearing quill headdresses that are much different than what we know now. And people recognized that they were different, and they wanted to know where it came from, and I had to tell them that this was what our ancestors wore prior to what we wear now.”

The expert said that over the last few years, he has noticed a lot of interest and a sort of renaissance in this practice.

“That is what I do, decolonizing our designs and artwork, and I show, over history, how that happened,” said Jacobs.