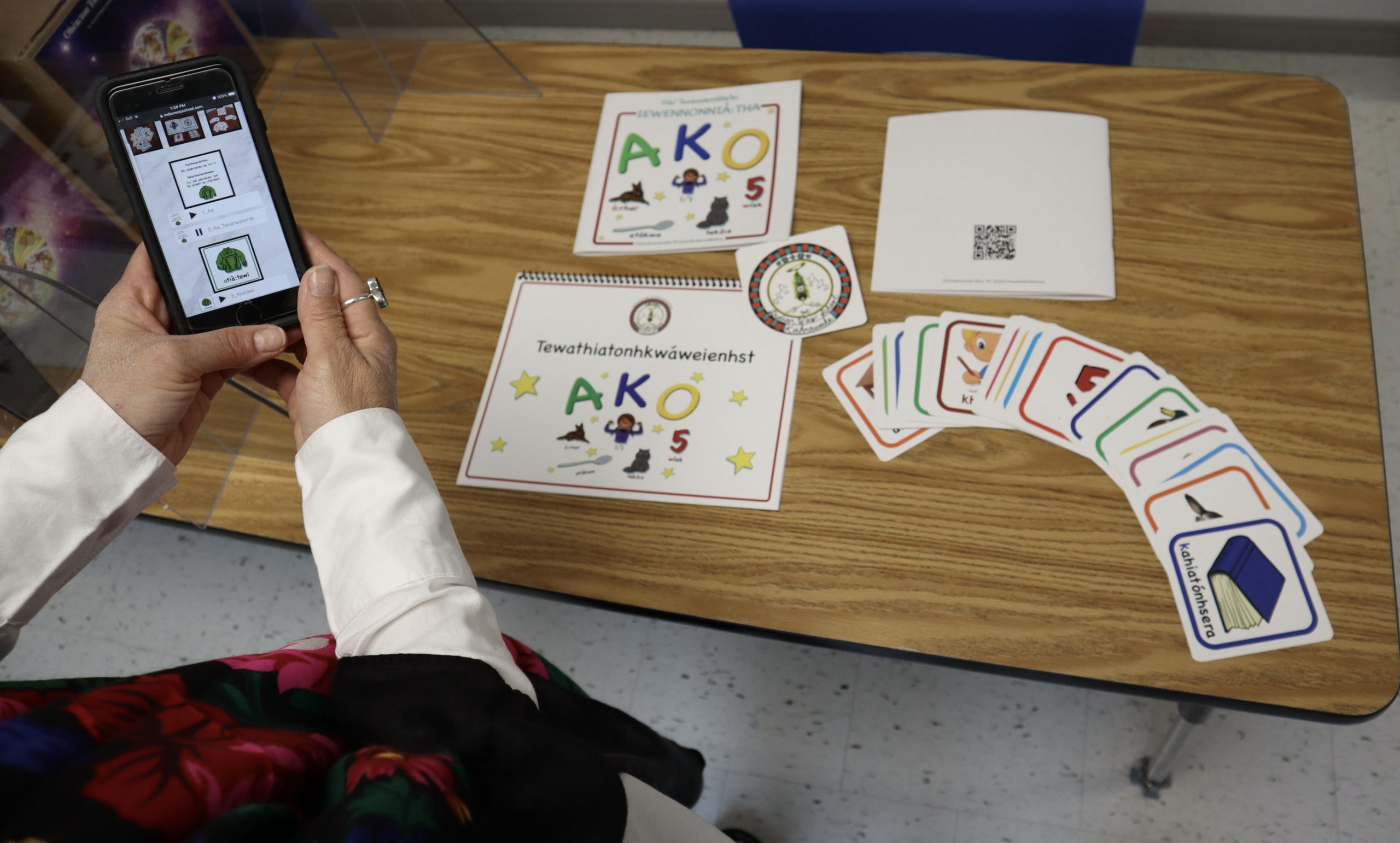 With the support of community elders, Indian Way School is launching a curriculum that balances traditional teachings with technological advancements.

The curriculum is in the form of a language app, workbook, and corresponding website, all tools developed from traditional stories told by first-language speakers and knowledge keepers.

“We’re bringing back what we want our people to start living again,” said Tekarontakeh, a traditional first-language speaker contributing to the Onkwehonwehnéha program. “Understand that we are not a thing of the past, but we are a people of today, and we will be a people of tomorrow. And the only way we can maintain who we are is to be who we are.”

The digital program launched for the Onkwehonwehnéha language and culture curriculum is meant to engage students up to grade six in an “authentic language experience,” with an emphasis on Tsi Skarihwaiénthon (replanting our seeds), according to curriculum coordinator Ienonhsaka’én:ions Trina Stacey.

The app, interactive games, workbook, and website were all developed by the school’s founders and knowledge keepers in collaboration with school administrators, teachers, web designers, artists, and the students themselves.

“We have different approaches to providing language and cultural experiences to the students, and they love it. The students are the ones who are guiding us,” said Ienonhsaka’én:ions. “We’re very observant to see what motivates them to acquire language and culture, and we cater to those needs.”

Ienonhsaka’én:ions described her process to develop these tools: she records stories shared by elders in the language, and then, in collaboration with artists from the community, she transforms these stories into books and audio-visual multimedia that connects each software to allow for a flow in the learning experience.

Each student is given their own portable tablet and stylus pen to use these tools. Eager to incorporate the language at home, school administrators have been working to develop digital resources that promote traditional teachings even before the COVID-19 pandemic.

“Studies have shown that losing a language has to do with the language not being in the home,” said Ienonhsaka’én:ions. “If we can transfer the knowledge through (technology) into the home, this is a way to disseminate language and culture to the next generation, because that’s their way.”

The advantages of technology are not without risk. Improperly used, technology can have harmful effects on children’s development. Therefore, balance is an important consideration.

Through his work as a teacher specializing in the history of Indigenous people and the Anishinaabe language, Alan Ojiig Corbiere from M’Chigeeng First Nation has also combined language and technology. In the past, Corbiere has observed the misuse of technology on projects he was involved in.

Indian Way School is working to find that balance between interactive, land-based learning and the convenience and quality that comes from technology.

“Being an Indigenous agricultural society, we understand that learning doesn’t end in May,” said Ienonhsaka’én:ions. “Who we are as a people, the planting season, the growing season is greatly intertwined and ingrained within us.”

Teachers and elders take students out on the land in the summer to practice the songs, ceremonies, and language that they learned during the school year.

“We bring them back to the school’s garden in the summer to weed their garden and give thanks to the garden,” said Ienonhsaka’én:ions. “Then they pick it, and they cook something with it.”

As director of the children’s series Tóta tánon Ohkwá:ri, Konwanénhon Marion Delaronde has worked to develop that balance over the 19 years the show has run on television.

“The balance is found with awareness building and compassion,” said Delaronde. “You have to respect the people enough to level with them, and that’s at children’s level too.”

When out of balance, the risk is stark: 18-month-old babies on TikTok, elementary school-age kids scouring the internet or playing violent video games.

“Anything that we create at school, it’s nonviolent, it’s language, culturally-based,” said the school’s administrator, Kanietisakhe Alma Diabo. “As far as developing the apps and the technology, the use of the technology, I don’t think it’s going to have an impact like other uses of technology.”

The conversation around balancing technology dates back decades.

In the 1990s, Corbiere attended a gathering on language revitalization. There, a colleague told him, “We actually need somebody like Bert and Ernie to be speaking Ojibwe,” Corbiere recalled. “Otherwise, the kids aren’t really even interested in the programs that we make.”

“I just went on this instinct,” said Delaronde.

To her, the key is to answer the question, “How are we going to get kids to speak (the language) out of their free will?”

The show’s success is evidenced in the overwhelming support from the community. Delaronde reads letters from parents and kids and consults elders frequently. She’s credited this feedback to the success of the show – her team creates the stories the community wants to see.

“There are all kinds of approaches to language revitalization,” said Delaronde. “My way has always been to spoon feed it and make it fun.”

The language has an important place in the classroom, at home, and also on the land. The solution, elder Ka’nahsohon Kevin Deer agreed, is balance.

Some community elders have begun to record the stories, the ancestral intelligence for the purpose of regeneration and revitalization of the language.

The language is an important component of traditional teachings because the language holds context and history in it. For example,

“We call ourselves Onkwehón:we. A lot of people will say it means ‘our original man.’ But in the language, when you understand the language, it means more than that. Onkwe is a person. Hon:we comes from the root word tsi nen:we, which means ‘forever.’ I am literally a person that has a spiritual essence that’s forever. Do you see how empowering that is?”

Ienonhsaka’én:ions emphasized the benefits that come from games integrating voice recordings of first-language speakers, which makes the proper, authentic pronunciation and rhythm of words accessible to kids at school and at home.

“We will always adhere to the teachings that have been passed down to us since time immemorial,” said Tekarontakeh. “One of the things we want our children to understand is that we don’t ever have to change. All we need to do is adapt in some areas.”

“When we talk about traditions, we’ve got to recognize that at one point, some of the traditions we have now weren’t traditions. They were innovations,” said Corbiere.

This adaptability is a strength to use in language revitalization efforts, Corbiere noted.

“The nursery and kindergarten students have surpassed the benchmarks in a way that (their teacher) hadn’t seen in the past,” said Ienonhsaka’én:ions. “So we have data to show that it’s working because they love it.

“And we’re just starting,” Ienonhsaka’én:ions beamed. “Wait till you see what we’ve got coming. It’s going to blow everyone’s mind.” 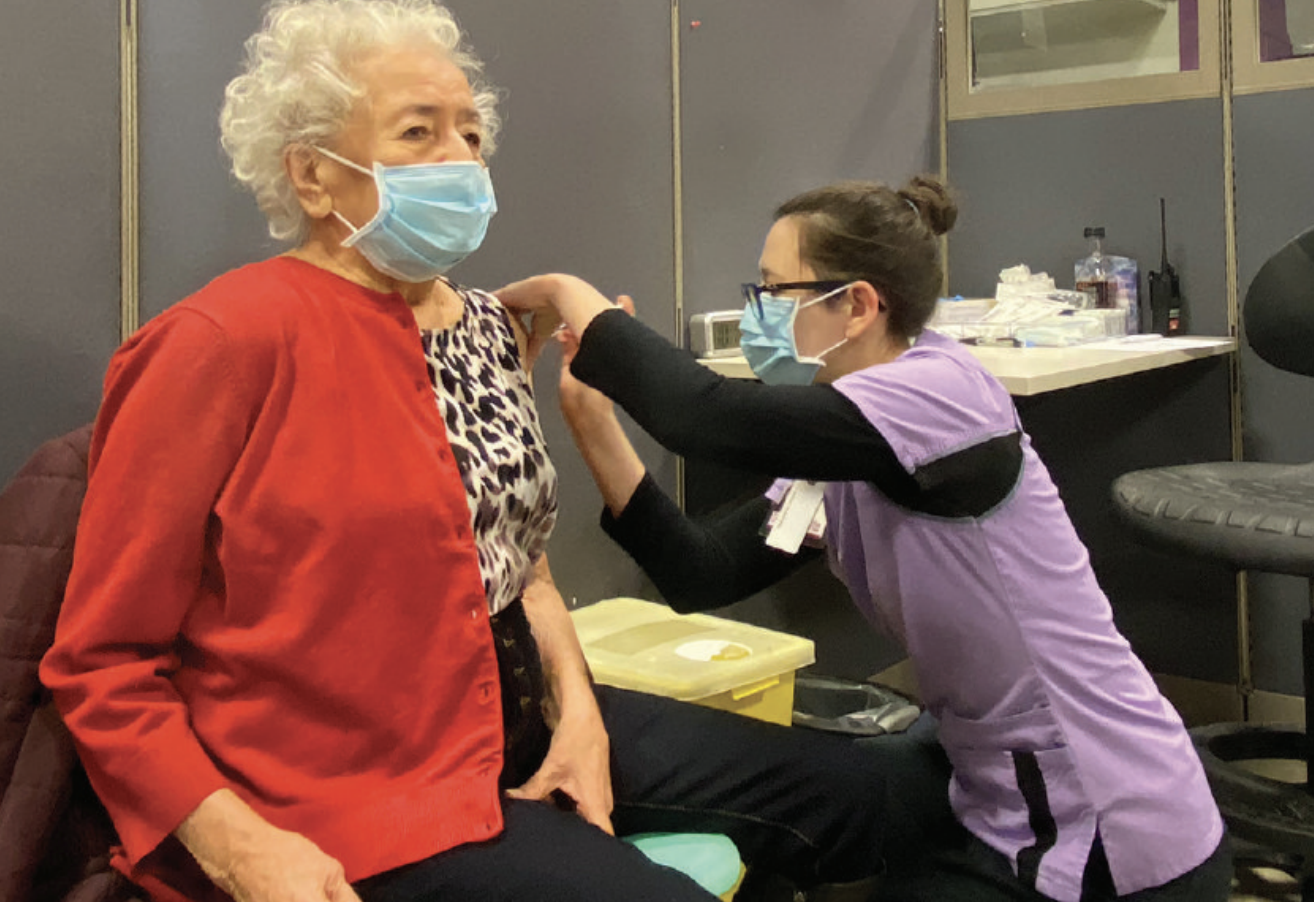