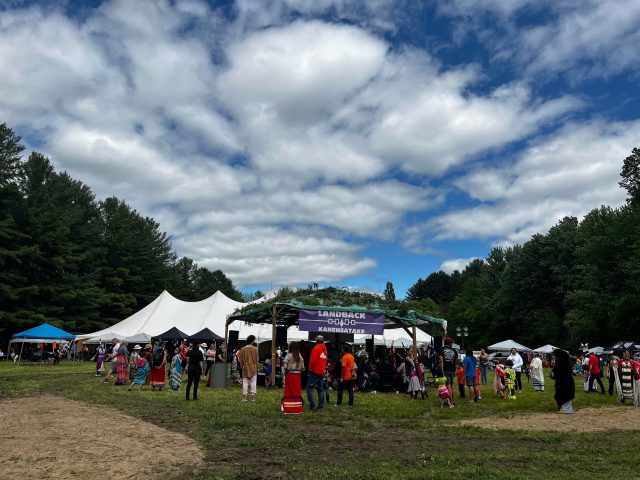 The second annual Land Back Powwow organized by The Red Urban Project attracted over 3,000 people and dozens of vendors to celebrate Indigenous spirituality and culture over the weekend.

“I wanted to create a powwow where we can kind of voice a little more on issues that our nations are dealing with today,” said Al Harrington of Shoal Lake #39 and the main organizer of the event.

While there were fewer attendees than in previous years due to the pandemic’s overall decrease of in-person events and some rainy weather over the weekend, Harrington shared that feedback on the ceremony has been overwhelmingly positive.

“The ones that needed that medicine were here, and that’s what really matters the most,” said Harrington.

The powwow is a space for many to reclaim their Indigenous history and culture after having been separated from it due to the Sixties Scoop and intergenerational trauma from residential schools. As a Sixties Scoop survivor, Harrington lost his Indigenous connection from a young age.

“I was taken away from my culture, brought up in the white society. I lost my language and lost half of my culture,” said Harrington. But at 18, he came back home to rediscover his roots and family.

Harrington became a traditional dancer, a practice which led him to participate in organizing powwows since 2009. By watching other ceremonies and through trial and error over the years, he began learning how to spearhead a powwow event.

As a racialized Indigenous child growing up in a majority white town after he was adopted into a Canadian family, Harrington suffered bullying from the townspeople and decided he had to leave.

“I felt very important that when I was a young man, that I needed to come find myself, and that’s where my journey started,” said Harrington. “I’m still learning our ways… at the end of the day, it’s basically we’re honouring the Creator and Mother Earth and our families.”

Harrington was able to find his family through a chance occurrence, when an Indigenous artist Fred Green, aka Greenefeather, came to Huntsville, Ontario, where Harrington’s adoptive family lived, and walked into his adopted parents’ picture frame store.

“Mr. Green walked in, and mom looked at him and… she felt just something from him,” Harrington, adding that Green walked over to his mother and introduced himself, saying he was “not sure why he’s here, but something told him to come here.”

“Mr. Green was very good friends with my grandparents,” he said. “And from there, that’s how I got reconnected with my biological parents.”

The powwow marks a space for other Sixties Scoop survivors to showcase their Indigenous excellence, such as Byron Conant Susaqueses, who reclaimed his Cree heritage when he was 30 years old by taking carving classes after he moved to Ottawa. He now owns Genuine Native Arts, where he sells handmade dream catchers, knives, and carved goods.

“The whole reason for the Sixties Scoop is to separate us from our culture. It’s cultural genocide,” said Susaqueses. “When I moved to Ottawa, I had no culture at all.”

Beadwork artist Charlene Rav from Kitigan Zibi Anishinabeg community shares a tent along with Susaqueses and other clothing vendors at different powwows. She has been coming to Kanesatake events for the past eight years.

“It’s just like familiar territory, and everybody loves my stuff. And they’ve always encouraged me to come back,” said Rav, who was taught to bead when she was 16 by her babysitter. Later this summer, she will teach a beading and dreamcatcher workshop at the Preville Fine Arts Center, located just off the island of Montreal.

“I just think everybody should come to at least one powwow. You’ll feel the energy when you walk onto the grounds and hear the drum – like the heartbeat of Mother Nature. And it really just touches your soul,” said Rav.

Like Rav, the owner of K Bonspiel Beadwork, Kanehsata’kehró:non Kassandra Bonspiel, is a self-taught crafting artist who regularly comes to the community’s powwows.

“I’ve done booths somewhere else, and I always prefer it here. People appreciate it more,” said Bonspiel. “They’ll actually see the hard work we put into it.”

A full graduation set, which includes a yoke, moccasins, cuffs, and a purse, takes over 100 hours to make, with the intricately beaded and leather pieces selling for $3,000. Moccasins, Bonspiel’s favourite item to make, take about 20-30 hours, depending on the size and design.

She developed her trade skills through observation and practice.

“Just kind of trial and error. Looking at some pictures of other beaders and kind of looking and seeing how would I go about this,” said Bonspiel.

For hoop dancer Mariah Miigwans from Kitigan Zibi, who learned to dance eight years ago from YouTube videos, dancing the fancy shawl in her handmade jingle dress is about connecting with her spirituality and traditional Indigenous teachings. At the event, Zibi took time to ground herself before her 30-minute performance in the mid-day sun.

“When I dance for the people, I really give a lot of myself out there through my mind, body and my spirit… so that people can be uplifted and feel the love and the power of prayer,” said Miigwans.

“Today, I was dancing a personal one. As we know, the pandemic has been hard for us all. So I’ve shared a little bit of my journey of what I’ve experienced and emotions that I’ve been feeling throughout the pandemic,” Miigwans explained.

At powwows, Miigwans looks to help others in their spiritual journeys while strengthening her own.

“My brothers and my sisters are in these circles that love me unconditionally. And take me where I need to go and will give me what I need,” said Miigwans. “It’s that reciprocal relationship that we need to have with one another but most importantly with Mother Earth.”

While Harrington cleaned the event grounds the day after the powwow, he announced to The Eastern Door he is already looking ahead to next year’s Land Back Powwow, which will be held over the May long weekend.